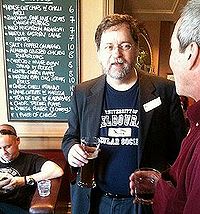 Subsequent to the decline of the New Atheism movement, the atheist PZ Myers wrote, "History will not remember me...".[1]

Google Trends shows how often a particular search-term is entered relative to the total search-volume. It provides Google search volume data across various regions of the world, and in various languages.

Below is a Google trends data graph related to monthly Google searches for the term "PZ Myers".

A contributor to Reddit atheism wrote about PZ Myers' loss of influence:

"it seems to me that his influence has waned. If I ever do hear about him, it's usually unfortunate circumstances. The last time I recall hearing about him was when he apparently accused Michael Shermer of rape. And now it's stories about how much of a dick he has become, especially after his less-than-sensitive handling of Robin Williams' recent suicide."[4]

See also: PZ Myers on the death of Robin Williams

Phil Mason goes by the moniker Thunderf00t at YouTube.

Another contributor to Reddit atheism wrote about PZ Myers' loss of influence: Freethoughtblogs and its loss of global market share on the internet

Freethought Blogs is a spinoff of ScienceBlogs launched by PZ Myers and Ed Brayton.

The web traffic of Freethought Blogs saw a dramatic decline from June 2019 to September 2019 according to the web traffic tracking company Alexa.

Freethought Blogs is a spinoff of ScienceBlogs launched by PZ Myers and Ed Brayton.

Alexa is a web traffic tracking company. In 2015 and 2016, Freethought Blogs saw a large decrease in its Alexa ranking.

Freethought Blogs fell sharply in its Alexa ranking for much of the latter part of 2016
.

In May 2017, according to Alexa, Frrethoughtblogs continued to lose global market share.

According to Alexa, on March 12, 2019, Freethoughtblogs was the 90,419th most popular website in the world.

See also: PZ Myers on the death of Robin Williams In August 2014, very shortly after the suicide of the popular, American comedian/actor Robin Williams, the atheist PZ Myers made a callous and socially/emotionally tone-deaf blog post on the matter compounded by him subsequently indicating in the blog post comment section that he should have been "more rude".[8]

PZ Myer's blog post on the death of Robin Williams

To see the PZ Myers' blog post about the suicide of Robin Williams, please see:

An excerpt of PZ Myers' blog post is given below:

Public reaction to Myers' post on the suicide of Robin Williams

Fellow atheist and evolutionist Jerry Coyne wrote in response to Myers' commentary on the suicide of Robin Williams:

Myers was angry because he felt that the news of Robins Williams death was crowding out the news story of the African-American Michael Brown who was shot by a police officer (a race riot subsequently ensued).[11]

DailyBanter.com commentary on PZ Myers' reaction to the death of Robin Williams

An excerpt from Bob Cesca's at the DailyBanter.com about PZ Myers' commentary on the suicide of Robin Williams:

Myers was criticized by one of the bloggers at Hemant Mehta's blog The Friendly Atheist due to his "his heartless, classless body blow to the still-warm corpse of Robin Williams."[11] In addition, Myers' hypocrisy was pointed out as he had made no blog posts previously about the Michael Brown matter and additionally Myers a day earlier, made "a substance-free 15-word post whose main attraction was a photo of a cute bulldog puppy."[11] In April 2015, Atheist Ireland announced, "Atheist Ireland is publicly dissociating itself from the hurtful and dehumanising, hateful and violent, unjust and defamatory rhetoric of the atheist blogger PZ Myers."[14] The atheist biologist Massimo Pigliucci said of Myers, "one cannot conclude this parade without mentioning P.Z. Myers, who has risen to fame because of a blog where the level of nastiness (both by the host and by his readers) is rarely matched anywhere else on the Internet...".[15]

Due to its notability requirements, the website Wikipedia® (which was founded by an atheist and agnostic), does not make mention of any specific accomplishments PZ Myers may have achieved in the area of social justice. Wikipedia does mention the social justice accomplishments of Christians such as William Wilberforce, Harriet Beecher Stowe and others.