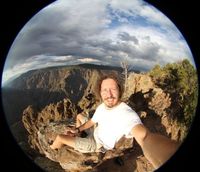 Phil Mason, more commonly known as Thunderf00t, is one of the more popular YouTube atheists/evolutionists.

When Thunderf00t is posed with questions which show his views are in error/inconsistent, he dodges the questions by calling them illegitimate/"malformed" or ignoring them.[1][2]

Thunderfoot on the atheist movement

Thunderf00t said about the atheist movement after Reason Rally 2016 had a very low turnout:

Thunderf00t debated the American Christian evangelist Ray Comfort and the debate did not go well for him and he was nervous during the discussion/debate. Atheist Matt Dillahunty indicated he was "disappointed" in Thunderf00t's debate performance and referred to his debate performance as "weak sauce".[4] In nearly all Christianity vs. atheism debates, atheists fare very poorly. Ray Comfort was very gracious in his commentary concerning the debate and took Thunderf00t out to lunch after the debate.[5][6]

The matter which appeared to spark the contention was how to properly deal with the significant amount of misogny within the atheist community (see: Atheism and women and Atheism and rape and Elevatorgate and Women's views of Richard Dawkins and Atheist leaders and immoral relationships).[10][11][12][13]

According to the atheist Matt Dillahunty Thunderf00t acted dishonestly and inappropriately subsequent to his removal from Freethought Blogs and he had "gone off the deep end".[14]

He also indicated that the accomplishments of Rebecca Watson are very thin and that she promotes feminism in an offensive manner.[17]

See: Eric Hovind vs. Thunderf00t at the Reason Rally