Christopher Eric Hitchens (April 13, 1949 - December 15, 2011) was a journalist, author and literary critic. Hitchens received a degree in PPE (philosophy, politics and economics) from Balliol College, Oxford, in 1970. From 1971–1981, he worked in Britain as book reviewer for The Times newspaper. He emigrated to the United States in 1981, and has written regularly, or been a contributing editor for Harper's, Vanity Fair and The Nation. He was an avowed Marxist, atheist and antitheist. Hitchens has a younger brother, Peter Hitchens, who is also a journalist, author and critic. Hitchens was a prominent founder and spokesperson of the New Atheism movement.

Christopher Hitchens was a member of the International Socialists and an active Trotskyist during his youth. Before his death he claimed to be "on the same side as the neo-conservatives" concerning various military interventions, but did not consider himself a conservative. He supported George W. Bush's foreign policy, but has a negative attitude towards Bush's support of intelligent design. Hitchens made himself unpopular, even among many fellow atheists for his support of the Iraq War, which was motivated by his hatred of Islamacists, Islamic terrorism, religion and his desire to see secularism advanced.[1][2]

Hitchens displayed provocative rhetoric and bloodlust towards radical Islamacists.[3] At the opening of the David Horowitz Freedom Center, Hitchens said of radical Islamacists, "It is a pleasure and a duty to kill these people".[3] Hitchens said of Islamic Iran, which engages in state-sponsored terrorism, "As for that benighted country, I wouldn't shed a tear if it was wiped off the face of this earth”.[4]

He was a harsh critic of Ronald Reagan, and considered Henry Kissinger a war criminal. 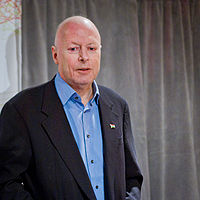 The atheist Luke Muehlhauser wrote concerning the debate: "The debate went exactly as I expected. Craig was flawless and unstoppable. Hitchens was rambling and incoherent, with the occasional rhetorical jab. Frankly, Craig spanked Hitchens like a foolish child."[6]

Mr. Hitchens was known for having a history of heavy drinking and chain-smoking.[7][8] Christopher Hitchens was being treated for esophageal cancer which was likely caused by drinking and smoking up until his death on December 15, 2011.[9][10] Despite his esophageal cancer, when asked by interviewer Charlie Rose if in retrospect he would have engaged in heavy drinking and smoking knowing his present cancer condition, Hitchens said he think he would have done things the same.[8] Hitchens also had problems with being overweight during his life (see: Atheism and obesity and New Atheism leadership's problem with excess weight).[11] According to the National Cancer Institute, "obesity is associated with increased risks of cancers of the esophagus."[12]

Matthew C. Nisbet wrote in his article Hitchens and Ebert on Atheism and Dying:

Hitchens developed a close friendship with the evangelical Christian Larry Taunton and took two road trips with Taunton near the end of his life.[14][15] He was contemplating converting to Christianity at this time.[14] During one of the road trips Hitchens read aloud the Gospel of John and asked Taunton questions about the book.[15]

According to the Alabama Media Group:

Christopher Hitchens' death and the decline of the New Atheism movement

On November 6, 2015, the New Republic published an article entitled, Is the New Atheism dead?[17]

Christopher Hitchens was known for being an eloquent and passionate public speaker who injected humor in his public speaking.

However, Hitchens had his critics in terms of his public debates.[6][18]

As noted above. Hitchen did very poorly in his debate with William Lane Craig.

At the end of Christian apologist William Lane Craig vs. atheist Christopher Hitchens debate there was an audience question and answer period (see: VIDEO).[19] The first audience member to ask a question twice asked Christopher Hitchens to label bestiality as an immoral act, but he refused to do so.[19][20] Dr. Craig said the question posed to Hitchens was a good one and it helped illustrate that atheism cannot offer objective moral standards (see: Atheism and morality).[20]

Although it is not reported in the press often, due the press preferring to focus on controversy and conflict, as it garners more viewership/readers, many Christians quietly pray for atheists/agnostics - even those of the militant variety such as Richard Dawkins.[21] The late atheist Christopher Hitchens had many Christians praying for him before he passed away and they were saddened when he died.[22]

In a video entitled Christopher Hitchens - A Wasted Life the PNN News and Ministry Network declared:

According to Google Trends from 2004 to 2020 there has been a significant decline in web searches for the term "Christopher Hitchens".

Opposition to Islam and Support of the War on Terror Christopher Hitchens became an activist against Islam when Ayatollah Khomeini declared a fatwa against his personal friend Salman Rushdie. The event has led him to become very vocal in his support of the war in Iraq and heavily critical of Muslim society and ethics.

In a TV interview with Hannity and Colmes a day after Jerry Falwell's death, Christopher Hitchens expressed his anger over Falwell's legacy, calling the media coverage of his death uniform in its "stupidity" and calling Falwell himself a "vulgar fraud and crook".[25] Hitchens went on to state such comments as "we have been rid of an extremely dangerous demagogue who lived by hatred of others and prejudice", "that it's a pity there isn't a hell for him to go to", "the evil he did will live after him", and "and I think his death is a deliverance".[25] Hannity said that such comments were "crude", "thoughtless", "mean", and "hateful."

“Stranger in a Strange Land”: In this piece that The Atlantic published two months after the attacks of 9/11, Hitchens summed up his break from the establishment left over the attacks and the war on terror that was then only beginning. Ibidem