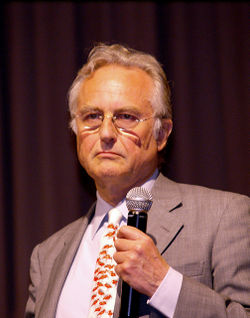 Atheist author and sociology professor Phil Zuckerman said of Richard Dawkins: "He is smug, condescending and emits an unpleasant disdainfulness. He doesn’t ever seem to acknowledge the good aspects of religion, only the bad. In that sense, I think he doesn’t help atheism in the PR department."[1] See also: Elevatorgate and Atheism and arrogance

A great irony of Richard Dawkins' alleged fierceness is that Dawkins has established a reputation for avoiding debates with his strongest opponents which is something the liberal media often fails to report.

In February 2010, the news organization The Telegraph reported Richard Dawkins was embroiled "in a bitter online battle over plans to rid his popular internet forum for atheists of foul language, insults and 'frivolous gossip'."[4] In September 2010, Richard Dawkins became nasty towards a woman in an audience he spoke before (see also: Richard Dawkins and women).[5]

In addition, Richard Dawkins appears to have had struggles maintaining marital harmony in his life and his three marriages ended in divorce.

On December 28, 2015, the Daily Express reported about Dawkins:

Ryan Kerney wrote at New Republic concerning Dawkins' behavior towards Emad Ahmed: "Richard Dawkins is just as rude in person as he is on Twitter, apparently."[7]

On February 13, 2015, Richard Dawkins gave an update about his minor stroke. Dawkins' doctors says he needs to avoid controversies due to his chronic high blood pressure.[8]

Prior to his stroke, Dawkins says his fellow liberal agnostics/atheists gave him a difficult time due to a controversy about his Twitter post relating to feminists and Muslims. As a result of the controversy, Dawkins was disinvited to a skeptic conference and this was very upsetting to him (See: Feminists cause Richard Dawkins to be disinvited to skeptic conference).[9]

In recent times Dawkins has been embroiled in a number of controversies involving the topics of feminism/Islam and he has faced a significant amount of criticism from his fellow skeptics/liberals (see: Richard Dawkins and women and Richard Dawkins and Islamophobia accusations).

Debates raged over praying for Richard Dawkins health after his stroke.[10][11]

The movie The Atheist Delusion features the new atheist Richard Dawkins being the object of audience laughter due to something unreasonable he said.[12] Dawkins indignantly asked the audience, "Why is that funny?".[13]

David Silverman took feminist Rebecca Watson off the speakers list for the Reason Rally after Richard Dawkins objected to her speaking at the event.[16] See: Elevatorgate

Elevatorgate is a term commonly used to describe a 2011 controversy involving new atheist Richard Dawkins' comments made to atheist Rebecca Watson which are perceived to have been inappropriate by a sizable portion of the atheist community and to the public at large.[17] Watson is a feminist.[18]

Due to the Elevatorgate controversy, the New Statesman reporter and fellow skeptic David Allen Green said he believed Dawkins was a misogynist and a racist.[19] In addition, Green wrote: "Can Richard Dawkins still credibly pose as a champion of rational thinking and an evidence-based approach? In my opinion, he certainly cannot, at least not in the way he did before."[20]

An article by Sarah posted at Skepchick about a conversation between Richard Dawkins and David Silverman (the ex-president of the American Atheists organization) which took place during the planning phrase of the 2012 Reason Rally:

See also: Atheism and fertility rates and Richard Dawkins and love and Atheism and the brain

Dawkins has been divorced three times and has one child.

Reporting on a study about the lower fertility rate of the non-religious, the Daily Mail indicated:

For more information, please see: Ellis, Hoskin, Dutton and Nyborg journal article on fertility and secularism in the United States and in developed countries

As a group, atheists have a sub-replacement level of births (see: Atheism and fertility rates).