A comprehensive study by Harvard University professor Robert Putnam found that religious people are more charitable than their irreligious counterparts.[1]

From a moral, metaphysical and spiritual perspective, atheists have an inability to satisfactorily explain the existence of love.[2][3]

From a moral, metaphysical and spiritual perspective, atheists have an inability to satisfactorily explain the existence of love.[4][5] See also: Atheism and morality

A Christian apologist wrote about atheism and love:

Jesus Christ and his apostles taught a gospel of love.[8]

The Christian website Good to those who love God declares:

An study done by the British website Freedating.co.uk reported about attitudes regarding Valentine's Day:

Christian theology emphasizes the importance of love and forgiveness.[11] As adults, children who attended religious services regularly are 87 percent more likely to possess high levels of forgiveness and are also 47 percent more likely to have a high sense of mission and purpose.[12] On the other hand, the atheistic worldview provides no basis for forgiveness (see: Atheism and forgiveness). Within the Western atheist population, there is very high levels of division/infighting (see: Atheist factions).

Sex: The queen of problems in evolutionary biology

In the Western World and globally, a significant majority of atheists are men. See: Atheism and women.

Without the origination of sex/gender, there would be no romantic love.

Since World War II a majority of the most prominent and vocal defenders of the evolutionary position which employs methodological naturalism have been atheists and agnostics.[13]

Evolution News and Views said about the origin of sex and the male/female genders:

For more information, please see the video: Sex and Evolution - An Embarrassing Conundrum

The Christian evangelist Ray Comfort contends that atheists hate God because they know that He does exist.[15] Comfort declared in 2009: "Atheists don't hate fairies, leprauchans or unicorns because they don't exist. It is impossible to hate something that doesn't exist. And that makes the point."[16]

Jesus Christ said that greatest commandment in the Old Testament is to love God with all your heart, soul and mind (Mark 12:30-31). In addition, the Bible says that God is love (1 John 4:8).

Opposites of love are hate, anger and apathy.

Various studies found that traumatic events in people's lives has a positive correlation with "emotional atheism".[18] See also: Atheism and the problem of evil

No doubt many atheists mask/suppress their anger towards God by feigning indifference and/or telling themselves that they are indifferent concerning His existence (See also: Atheism and hatred of God).

A subgroup of atheists/agnostics refers to themselves as apatheists. See also: Atheism and apathy

Atheism and hatred of God commentary

In debates with atheists, the popular Christian YouTube video maker Shockofgod often asks atheists the loaded question, "Is God evil?". Invariably, so-called atheists quickly say yes. Then Shockofgod informs the "atheist" that they admitted that God exists.[19] Shockofgod also declares that Christians never accuse leprechauns of being evil because they know they don't exist.[20] See also: Denials that atheists exist and Atheism and its retention rate in individuals.

The Christian evangelist Ray Comfort contends that atheists hate God because they know that He does exist.[22] Comfort declared in 2009: "Atheists don't hate fairies, leprauchans or unicorns because they don't exist. It is impossible to hate something that doesn't exist. And that makes the point."[23]

The human brain is the most complex physical structure in the universe.[24]

The human brain is the most complex physical structure in the universe (The Bible and the scientific evidence strongly suggests that there is no intelligent life on other planets).[28]

The atheist worldview cannot explain the existence of consciousness and the theistic worldview can offer a reasonable explanation.[29]

The Apostle Paul taught about love that "it does not seek its own, is not provoked, does not take into account a wrong suffered.." (1 Corinthians 13:5 NASB).

See also: Evolutionary belief and sexual immorality and Social effects of the theory of evolution

The evolutionist and atheist philosopher Peter Singer defends the practice of bestiality (as well as abortion, infanticide and euthanasia). Despite holding these immoral views the liberal and pro-evolution academic establishment rewarded his views with a bioethics chair at Princeton University.[31] See: Atheism and bestiality

Since World War II a majority of the most prominent and vocal defenders of the theory of evolution which employs methodological naturalism have been atheists or agnostics.[32]

In addition to atheism/evolutionism being causal factors for sexual immorality, Pastor Carl Gallups of the PPsimmons YouTube channel points out that the evolutionary paradigm cannot explain the origin of sexual reproduction in his video entitled Sex and evolution - An Embarrassing Conundrum.

Atheism and lower empathy towards others

A child in Thailand where the nontheistic form of Buddhism called the Theravada school of Buddhism is prevalent. In 2010, the Pew Research Forum indicated that 93.2% of the people of Thailand were Buddhists.[35] Per capita atheists and agnostics in America give significantly less to charity than theists even when church giving is not counted for theists (See: Atheism and uncharitableness).

In 2007 the Baptist Press reported:

Dr. William Lane Craig points out that the social science research indicates that atheists who have family/social contacts with religious people give more to charity than atheists who do not have such an influence.[37]

It is estimated that in the past 100 years, governments under the banner of atheistic communism have caused the death of somewhere between 40,472,000 and 259,432,000 human lives.[38] Dr. R. J. Rummel, professor emeritus of political science at the University of Hawaii, is the scholar who first coined the term democide (death by government). Dr. R. J. Rummel's mid estimate regarding the loss of life due to communism is that communism caused the death of approximately 110,286,000 people between 1917 and 1987.[39]

Richard Dawkins cold and impersonal letter to his daughter

Theodore Beale wrote in the his book The Irrational Atheist:

Since World War II a majority of the most prominent and vocal defenders of the evolutionary position which employs methodological naturalism have been atheists and agnostics.[43] Evolutionary racism played major role in causing the Holocaust (see: Social effects of the theory of evolution). There is a significant amount of racism within the atheist population (see: Atheism and racism). This also holds true for atheists in the Western World as well (see: Western atheism and race).

The Apostle Paul taught about love in a letter to the Corinthian Church:

The atheist and lesbian Greta Christina told the journalist Chris Mooney on the Point of Inquiry podcast, "there isn't one emotion" that affects atheists "but anger is one of the emotions that many of us have ...[it] drives others to participate in the movement."[45]

The atheist Brendan O'Neill wrote in The Telegraph in an article entitled How atheists became the most colossally smug and annoying people on the planet: "These days, barely a week passes without the emergence of yet more evidence that atheists are the most irritating people on Earth."[48] 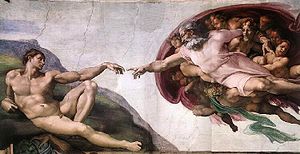 See also: Atheism and art/music and Atheism and a lack of appreciation for the beauty of the human body and Argument from beauty

Solomon's Song of Songs is considered to be a classic piece of literature dealing with romantic love.

In addition, theists have created many great works of art dealing with the human physique such as Michelangelo's Creation of Adam. For thousands of years lovers have been giving compliments to their lovers about their beauty. Objective beauty exists and beauty is not merely subjective in nature.[49] Theologically conservative Christians believe in the existence of objective beauty whereas atheists commonly reject the existence of objective beauty (See: Argument from beauty),

Despite atheism being around since at least ancient Greece, there has not been a strong tradition of creating musical and artistic works related to atheism, atheism/love or atheism/beauty.

Musical/artistic talent can be enhanced through practice and the atheist creed of "there is no God" is not an inspiring creed that produces a significant amount of music/art. For example, despite Wikipedia being founded by an atheist and an agnostic, there are no articles specifically devoted to the topics of atheist music or atheist art at Wikipedia, but Wikipedia does have articles devoted specifically to Christian art and Christian music.

The Apostle John records Jesus making an allusion to the devil and declaring that he is a thief that comes to rob, kill, and destroy.[50] Jesus also declares the children of the devil want to carry out their father's wishes and that the devil was a liar and a murderer.[51]

The Russian revolution caused the most notable spread of atheism

According to the University of Cambridge, historically, the "most notable spread of atheism was achieved through the success of the 1917 Russian Revolution, which brought the Marxist-Leninists to power."[52] Vitalij Lazarʹevič Ginzburg, a Soviet physicist, wrote that the "Bolshevik communists were not merely atheists but, according to Lenin's terminology, militant atheists."[53] However, prior to this, the Reign of Terror of the French Revolution established an atheist state, with the official ideology being the Cult of Reason; during this time thousands of believers were suppressed and executed by the guillotine.[54]

As far as the methods used to promulgate atheism, there is a history of using deception. In addition, atheistic communist countries have used violent means to suppress theism.

In an a letter to his fellow Christians, the Apostle John taught concerning love:

In addition, Dawkins has a reputation of being an angry man (see: Richard Dawkins and anger).

Testimony of ex-atheist A.S.A Jones about atheism and love