Alcoholism refers to addiction to alcoholic beverages. The medical term used to refer to alcoholism is alcohol dependence. A person can be diagnosed with alcohol dependence if at least three of these criteria occur during the same 12-month span: (a) tolerance (i.e., more alcohol is needed to produce the same effect); (b) alcohol withdrawal; (c) alcohol is used in larger amounts or over longer periods than intended (i.e., loss of control); (d) chronic desire or unsuccessful attempts to reduce drinking; (e) a great deal of time is spent obtaining or using alcohol; (f) other activities are reduced in order to use or recover from using alcohol; (g) drinking continues despite persistent problems that it either causes or makes worse.[1]

As with any addiction, both affirmative and defensive approaches can be helpful to overcome it. Developing healthy hobbies, particularly ones that actively use the mind such as writing, chess-playing, Bible-reading, and debate, can drive out the unhealthy habit of drinking alcohol.

Health and other effects

People with alcoholism have difficulty controlling their drinking, and thus tend to continue to drink despite problems that it causes. For example, being intoxicated or hung over can cause poor performance at school or work, leading to poor grades or loss of employment. Intoxication also impairs judgment, which may lead to legal problems when people engage in behaviors that they would think better of when sober (e.g., driving under the influence). Alcoholism can also be damaging to the family, leading to marital discord or divorce, and can contribute to domestic violence.

Alcohol intoxication is commonly associated with crime; in cases where husbands murder their wives, about 66% of the cases involved drinking.[2]

As noted above, alcohol withdrawal is a primary feature of alcoholism. Withdrawal can occur when a person who is normally a heavy drinker tries to quit or is unable to obtain alcohol. Alcohol withdrawal can lead directly to death. Heavy drinking reduces the brain's supply of GABA. Both alcohol and GABA limit the firing of synapses in the brain. When neither is present in sufficient amounts, uncontrolled firing of synapses may occur, causing delirium tremens ("the DTs"). Symptoms of delirium tremens include hallucinations, convulsions, seizures, and heart failure. Delirium tremens can be controlled fairly easily with medical supervision, often with the use of benzodiazepines.

A number of methods to solve alcoholism are available for alcoholism, including faith in God, detoxification, psychotherapy, self-help groups, and medications. 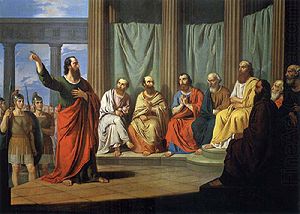 The Apostle Paul wrote concerning drunkards and becoming free of enslavement to a drunken lifestyle:

The Bible teaches that excess alcohol use is a sin.[3] Bible believing Christians commonly assert that the root cause of alcoholism is often spiritual/character issues and through the power of God these can be addressed.[4]

Many troubled people turn to alcohol as a means to escape their personal problems rather than rely on the power of God.

Australian online opinion writer and lecturer in ethics and philosophy at several Melbourne theological colleges, Bill Muehlenberg, in his essay The Unbearable Heaviness of Being (In a World Without God) wrote:

Detoxification is an abrupt cessation of drinking, often accompanied by medications such as benzodiazepines to minimize withdrawal symptoms. Detoxification helps a person to cope with the physiological effects of chronic heavy drinking, but does not help with issues such as urges to drink or underlying reasons for alcohol dependence. Consequently, additional treatment is usually required for a successful outcome.

Psychotherapy for alcohol dependence can occur in individual or group format. This treatment helps an individual to be aware of underlying issues that may have led or contributed to alcoholism (e.g., depression). Psychotherapy also provides an individual with skills to help prevent relapse, such as avoiding situations in which not drinking would be difficult. As noted earlier, studies indicate that consumers of secular counseling psychology for alcoholism receive hardly any benefit at all.[7][8] For more information please see: Ineffectivness of counseling psychology

Self-help groups are commonly used by those suffering from alcoholism. The best known is Alcoholics Anonymous, in which members acknowledge their problems with alcohol and provide support for other members.

Medications are often used to discourage alcohol use. Antabuse (disulfiram) interrupts the metabolization of alcohol, increasing the amount of acetaldehyde in the body and leading to substantial hangover symptoms shortly after drinking and discouraging those who have taken the medication from drinking. Naltrexone is a medication that binds to opioid receptors in the brain, decreasing alcohol cravings and promoting abstinence.

According to the World Health Organization's (WHO) regional office in Europe, "The WHO European Region has the highest proportion in the world of total ill health and premature death due to alcohol.[9]

According to the World Health Organization's (WHO) regional office in Europe, "The WHO European Region has the highest proportion in the world of total ill health and premature death due to alcohol.[10]

An Australian National Council on Drugs (ANCD) report indicated that 20% of Australians drink at levels putting them at risk of lifetime harm.[11] Alcoholism was a serious social problem in the former atheistic Soviet Union.[12] Between 1940 and 1980, this atheist state had the largest increase of the amount of alcohol usage in the developed world.[13]

Alcoholism was a serious social problem in the former atheistic Soviet Union.[14] Between 1940 and 1980, this atheist state had the largest increase of the amount of alcohol usage in the developed world.[15]

Irreligion, alcoholism and various generations in the United States

Recent generations in the United States:

See also: Atheism and the brain

A 2012 study suggests that a habit of binge drink risks serious brain damage including increasing memory loss later in adulthood.[16][17]

Binge drinking is a potent risk factor for suicide.[18] Atheists have a higher suicide rate than the general population.