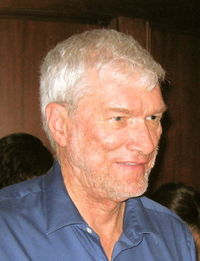 Kenneth Alfred (Ken) Ham (born 1951 in Australia) is a prominent Christian apologist who emphasizes Young Earth Creationism and the reliability of Scripture in all matters of which it speaks, including science. He is the founder and president of Answers in Genesis, an apologetics organization founded in 1994 in the United States with the purpose of upholding the authority of the Bible from the very first verse.[1]

Ham also speaks on a daily radio feature, "Answers with Ken Ham," and is a prolific public speaker and author and the brains behind the Creation Museum and the Ark Encounter in Cincinnati, OH. He also founded "Answers" magazine, which won the prestigious "Award of Excellence" for top Christian magazine in 2011 from the Evangelical Press Association.[1]

Ham was born and raised in Queensland, Australia.[2] His career of defending Christianity and the Bible was partly inspired by his father, a school teacher who had the same passion as Ham.[2]

Ham earned a Bachelor's degree in applied science from Queensland Institute of Technology and a Diploma of Education from the University of Queensland. In addition to this, he has also received six honorary degrees—DD in 1997 from Temple Baptist College in Cincinnati, OH, DLitt in 2004 from Liberty University, DLitt in 2010 from Tennessee Temple University, DHL in 2012 from Mid-Continental University in KY, a DS in 2017 from Bryan College in TN, and a DD in 2018 from Mid-America Baptist Theological Seminary in TN.[3]

In his last year of his university training to become a public school science teacher, Ham was strongly influenced by The Genesis Flood, a book co-authored by Dr. Henry Morris, a hydraulic engineer, and Dr. John Whitcomb, a theologian, showing how scientific evidence supported the Great Flood as described in the Bible.[4]

As an adult, Ham became a science teacher at Dalby State high school, and there he "was soon confronted with a need to defend his faith in the classroom".[2] Ham started a creationist ministry that was based in his house in Sunnybank, and in 1987 he and his family moved to the United States to work at the Institute for Creation Research (ICR).[2] After moving to America, Ham worked for seven years under Dr. Henry Morris at ICR.[5] He began the Answers in Genesis ministry in late 1993 along with Mark Looy and Paul Palmon. The Creation Museum broke ground in 2000 and opened in 2007. The Ark Encounter, featuring a full-size Noah's Ark according to Biblical dimensions, opened on July 7, 2016.[6]

According to AiG, Ken Ham had a vision for "a creation museum that teaches the truth" since 1979, when he began his ministry in Creation Science.[7] During the mid-1990s, after AiG was founded, the ministry began searching for land in Northern Kentucky to build the museum.[7] The Museum was opened on May 28, 2007[7] at the cost of $27 million.[8] $21 million of the cost was raised through private donations.[9]

It was estimated that 250,000 people would visit the museum in the first year.[8] However, the 250,000th visitor visited the museum in early November, nearly seven months ahead of schedule.[7][10]

Ham has been uncompromising in his defense of young-earth creationism and has criticized schools and individuals that have failed to uphold it. In March 2011, AiG and Ham had an invitation to the two Great Homeschool Conventions revoked by the events' organizers. The organizers cited Ham's criticism of the group as the reason for the revoked invitation, but the board of AiG found no spiritual wrongdoing on Ham's part.[11]

The Legacy Hall in the Creation Museum, where the debate between Ken Ham and Bill Nye took place.

On February 4, 2014, science educator and evolutionist Bill Nye debated Ham.[12] The debate was the dominant trending topic on Twitter and Facebook and it was estimated that over 3 million people watched the debate live.[13] It was reported in the mainstream media that because of the debate, interest and support for the Ark Encounter, which had been struggling for funds, returned, and AiG was able to raise enough money so construction could begin in 2014,[14] even though AiG has stated that this was not the case, as it was not reasonably possible to purchase a bond after the debate.[15]

After the completion and success of the Creation Museum, Ham and AiG started focusing on building the Ark Encounter, a life-sized replica of Noah's Ark.[7] The plans for constructing the Ark Encounter were announced by AiG, along with Kentucky Governor Steve Beshear on December 1, 2010.[7]

During the construction of the Ark Encounter, AiG sued the state of Kentucky after officials blocked AiG from receiving a sales tax tourism incentive worth up to $18 million because AiG would use the Ark Encounter to share the gospel. On January 25, 2016, Federal Judge Gregory Van Tatenhove ruled in AiG's favor, ruling that blocking the incentives from AiG was unconstitutional and violated their First Amendment protections.[16][17][18]

On July 7, 2016, the Ark Encounter was opened to the public in Williamstown, Kentucky.[19] The Ark cost $100 million and is 510 feet long, 85 feet wide, and 51 feet high, based on the dimensions given in the Bible.[20] The opening date, 7/7, was intentionally chosen to coincide with Genesis 7:7. The next day, Bill Nye visited the Ark Encounter upon invitation from Ham.[21] As they walked the Ark, they had an informal debate.[22]

In February 2018, the University of Central Oklahoma – a public university – disinvited Ham to speak after an "LGBT" group bullied – the words of the student body president – the university, due to Ham's beliefs on homosexual "marriage." While Ham had the option of signing a paper promising not to discuss homosexuality while speaking, he refused as it would restrict his free speech on a public university.[23] This happened despite the fact that the university signed two contracts with Ham to speak,[24] as well as the fact that the university hosted several perverse events, such as "sex carnivals" and drag queens, with no opposition.[25] A few days later, under pressure, UCO invited Ham again to speak,[26] and he ultimately did speak as scheduled.[27]

As a Christian, Ham believes that salvation is obtained through faith in Christ alone, regardless of their beliefs on creation.[2][28][29] He does believe that the issue of evolution and the age of the Earth is important and an authority issue, however.[29] Ham denies any claim that he is any type of messiah, stating that only Jesus is the Messiah.[30] He has criticized those who attach his name to his beliefs, stating "What I say really doesn’t matter. What matters is what God’s infallible, perfect Word says."[31]

Ham believes homosexuality is a sin, based on clear biblical teaching. To celebrate the Christmas season in 2016, AiG decorated the Ark with rainbow lights in order to "take the rainbow back" from the homosexual agenda and show the true and undefiled meaning of the rainbow as recorded in Genesis 9:12-16.[32][33] Like usual, the media and supporters of the homosexual agenda have circulated blatant misrepresentations and even lies concerning this action as well as the true meaning of the rainbow.[34] Ken Ham announced in February 2017 that AiG would permanently light the Ark in rainbow colors.[35]

Ham is married to his wife Mally, who trained as a bank teller. The couple has five children—four born in Australia and one in the U.S.[36]