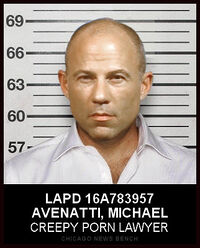 Michael Avenatti is a far-Left racist and Democrat Party presidential hopeful who was indicted in federal court on March 25, 2019, for attempted extortion of $20 million from sports apparel company Nike.[1]

Avenatti is best known as an expert analyst and consultant appearing on MSNBC. Avenatti expressed his inherent racism in a candid interview with Time magazine about the 2020 Democratic presidential nominee: "I think it better to be a white male."[2] Avenatii's claim of being taken out of context has been debunked.[3] He became an enthusiastic supporter of notorious segregationist and racist Joe Biden when Biden announced his candidacy for the Democratic Party presidential nomination in the Spring of 2019.

Avenatti, who has a reputation for exploiting women,[4] was arrested for felony domestic violence in November 2018.[5][6] He was found guilty on all counts on February 14, 2020 in the trial stemming from his extortion attempt against Nike[7] and faced additional criminal trials: One in New York on charges of stealing $300,000 in book proceeds from former client Stormy Daniels, and another in California on a charge of embezzlement of another client. Avenatti faced up to 97 years in prison on all charges from the Nike extortion case and the California embezzlement trial[8] and requested his white privilege be factored into sentencing.[9] Avenatti was sentenced to two and a half years.[10]

While in college and later in law school, Avenatti worked at The Research Group, a mysterious outfit run by former Bill Clinton staffer and Obama Chief of Staff Rahm Emanuel, where he served as an "opposition researcher" for Senator Joe Biden and 150 other campaigns in 42 states.[11] Avenatti's mentor, Rahm Emanuel is known to have sent a dead fish to an opponent,[12] evoking the image of a mafia gangland war in a political campaign.[13] Trailer for Michael Avenatti co-hosting ABC's The View. Avenatti made 122 appearances on CNN and 108 appearances on MSNBC during his short lived presidential candidacy in 2018.

Avenatti's Wikipedia biography appears to be a cut-and-paste from his CV at avenatti.com.

Avenatti was a staple pundit on MSNBC.

Avenatti was one of the first Democrats to announce his intention to challenge the re-election of President Donald J. Trump.

Michael Avenatti accused Judge Brett Kavanaugh of targeting women for gang rape with alcohol and drugs.[16] Avenatti publicly announced he was in contact with an anonymous accuser.[17] When the Committee investigated the allegations, Avenatti made materially false and misleading claims to the Committee Counsel. The third accuser, Julie Swetnick, a former client of Debra Katz, made a sworn statement to the Committee on September 23.

Swetnick made graphic allegations about high school parties that Brett Kavanaugh supposedly attended, but without any specific accusation based on personal knowledge of any wrongdoing against Kavanaugh himself. One enormous flaw in this third allegation: 60 classmates of Kavanaugh have signed a letter saying they have never met this woman who claims she was at all these parties.[18] Many other inconsistencies and credibility issues arose.[19][20][21] For example, she was revealed to have been in later college years while Kavanaugh was in his early high school years.[22] The New York Times tried but failed to corroborate the allegation.[23] It was soon discovered that the accuser had a troubled past,[24][25] and she had sued one of her employers for "sexual harassment" using Ford's lawyer's firm.[26][27] She was sued in 2000 for making false sexual misconduct allegations.[28][29]

As with the previous allegations, dozens of women rallied to Judge Kavanaugh's defense, with sixty of them signing a letter affirming he had a good character in high school.[30]

Observers noted that "Michael Avenatti managed to make it all about him."[31] Avenatti refused to cooperate with Committee requests for information and FBI ultimately did not contact him.

Later, in an NBC interview, Swetnick contradicted the main points of her accusation, stating this time that she did not actually see Kavanaugh "spike punch" despite originally saying she had a "firm recollection" that he did.[32][33] Avenatti's smear was seen as helping, rather than hurting, Kavanaugh because of how ridiculous a claim it made.[34]

On October 25, 2018, Chairman Chuck Grassley referred Avenatti and Swetnick to the FBI for potential conspiracy, false statements, and obstruction of Congress.[35][36][37]

Avenatti received illegal raw FISA data related to Donald Trump attorney Michael Cohen from the Obama administration. While conducting illegal FISA surveillance on the 2016 Trump campaign in search of Russia collusion, the Obama FBI only discovered a payment of $130,000 Cohen made to a prostitute, Stormy Daniels. The information was turned over to Avenatti to pursue civil action on behalf of the woman so as to mask Obama's illegal domestic spying and meddling in the 2016 presidential election.

After FusionGPS was hired by the 2016 Clinton campaign in April 2016 and cut off from access by the FISA Compliance Audit, FusionGPS and the DOJ needed a work around for continued access to FISA 702 information in order to spy on the Trump campaign. Nellie could use her husband, Obama Associate Attorney General Bruce Ohr’s high level DOJ access to continue gathering FISA-702 data.[46]

FISA 702 searches may not, by law, ever be used to target American citizens; they may only be used to target non-citizens outside the United States. Even non-citizens inside the United States enjoy Fourth Amendment protections.[47] FBI contractor access to the FISA database was cutoff for this reason - the Obama FBI under its disgraced director James Comey had violated the civil and constitutional rights of some 5,000 Americans by committing illegal FISA 702 searches beginning shortly after Donald Trump organized his national presidential campaign.[48][49]

One such case was Trump attorney Michael Cohen.

In 2013 Avenatti formed a company, Global Baristas, to buy Seattle-based Tully's Coffee out of bankruptcy.[50] Avenatti first formed a partnership with actor Patrick Dempsey, but Dempsey later backed away from the venture after a short legal battle that resulted in a settlement.[51] Since 2015, Global Baristas has been named in more than 50 lawsuits in state and federal courts for breach of contract, unpaid bills, and unpaid taxes.[52]

In 2017, a Florida man named Gerald Tobin alleged Avenatti failed to pay him $28,700 for private investigatory work. As a result, Avenatti's firm was abruptly forced into bankruptcy.[53] Tobin's claim caused Avenatti to cancel a deposition in an unrelated lawsuit days later, raising the question of collusion between Avenatti and Tobin. The issue was resolved when the pair entered into a Non-Disclosure Agreement, and Avenatti paid Tobin the $28,700.[53]

In 2018, Avenatti's law firm was subjected to a $10 million judgment in U.S. bankruptcy court.[54] Avenatti has also defaulted on a $440,000 judgment in back taxes, penalties, and interest that he was personally obligated to pay under another bankruptcy settlement. The U.S. Attorney's office asserted in court that a motion seeking payment would soon be filed against Avenatti.[54] Eagan Avenatti LLP had been in Chapter 11 bankruptcy proceedings and, in December 2017, had agreed to pay $4.8 million in unpaid fees to a former partner, $2 million in back taxes, and $1 million to other creditors.[55] In June 2018, the former partner filed a motion in U.S. bankruptcy court asking for a lien on any and all legal fees Avenatti's firm might collect, up to $10 million, from clients in 54 cases including his representation of Stormy Daniels.[56]

In November 2018, Stormy Daniels claimed that Avenatti filed a lawsuit on her behalf without her consent.[57][58]