From Conservapedia
(Redirected from Drug)
Jump to: navigation, search
A drug is a chemical substance that affects the processes of the mind or body, and a source of terrible addictions. The term "drug" may be used to refer to, beneficial medicine (such as antibiotics and painkillers like morphine) or certain other legal chemicals such as alcohol, caffeine, or nicotine but may also refer to illegal drugs. 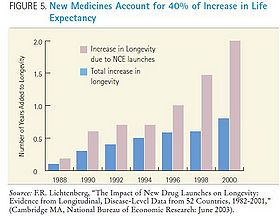 new prescription drugs prolong life
All drugs share three properties: tolerance (the body getting used to the drug), addiction (the body's physical need to ingest the drug in order to maintain homeostasis), and withdrawal (the homeostatic imbalance resulting in the cessation of taking the drug). With legal drugs, especially over-the-counter, these properties are often too minor to be observable in ordinary circumstances. With illegal drugs, these properties are by definition noticeable and often very harsh. The Bible specifically warns against the use of recreational drugs, in Ephesians 5:18: "And be not drunk with wine, wherein is excess; but be filled with the Spirit."

Illegal drugs are drugs which are prohibited by law. This is often based on the fact that these drugs cause damage to a person's brain and other organs, and that the drugs are highly addictive. Many celebrities have become addicted to drugs that killed them; many more non-celebrities have also died at a young age from drug addiction.[1]

Drugs, both legal and illegal, have significant effects on babies inside the womb, so pregnant women should use all drugs with caution, and consult with their doctor about all drugs they are on. Doctor/patient confidentiality protects women from legal prosecution if the doctor advises that they quit any illegal drugs they may be taking, so long as they comply.

Some drugs can be used by athletes to gain a competitive advantage in many sports, including track and field, cycling, baseball and weightlifting. Drugs often abused in this way include amphetamines, steroids and EPO. Commonly known as doping, this practice is forbidden in almost all sports for two main reasons:

Nevertheless, there have been many high-profile cases of top performers being caught using drugs, including the sprinter Ben Johnson and the cyclist Tyler Hamilton.