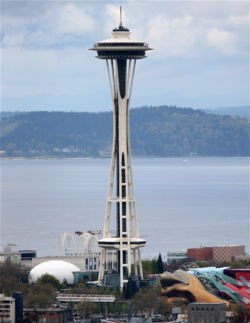 The Space Needle, a Seattle icon.

Seattle (47.606N. -122.33W) with a population 621,000 in 2012, is the largest city in the American state of Washington and in the Pacific Northwest. It was named after Chief Sealth, a Suqamish/Duwamish Native American leader.

Seattle was officially incorporated in 1889, but had been a town since 1851, when a group of pioneers from Illinois settled West Seattle, a peninsula within the current city limits to the west. From about 1960 until about 2000, the population remained relatively static, just under 600,000. However, the population increased into the suburbs north toward Everett, south toward Seatac and Tacoma and east (across Lake Washington) to Mercer Island, Kirkland, Redmond, Bellevue and Issaquah. As fuel prices have increased and zoning has allowed more growth, Seattle has grown about 40,000 in the last 6 years.

Long influenced by liberal policies, Seattle has been in a state of decline,[1] particularly in recent years under current Democrat mayor Jenny Durkan, an open lesbian who has drawn criticism for her racism and sexism for her attacks on white men (along with throwing around accusations of "white privilege"), claiming them responsible for the rioting and destruction being caused in the 2020 Antifa riots (while ignoring that she herself is white and that those she blames for the chaos are actually leftists like herself).[2] On July 10, 2020, it was announced that a King County Superior Court judge had approved a petition to recall Durkan due to her poor handling of the Antifa rioting in Seattle.[3]

Seattle is a very liberal city. Seattle is the least churched city in America, and Washington State has the highest concentration of people who say they have no religion, including atheists & agnostics.[4] The Pacific Northwest as a region features the lowest amount of religious people.[5]

The makeup of the population was 67.1 percent White, 16.6 percent Asian, 9.7 percent African American, 2.38 percent from other races, 1.00 percent Native American, 0.50 percent Pacific Islander, and 4.46 percent from two or more races. Hispanic or Latino of any race were 6.3 percent of the population. Seattle's median household income is $45,736, where the national average is $41,994. The median age of Seattle residents is 37.9. 36.16% of Seattleites are married, 11.5% are divorced, and one-third of those who are married have children. The density is 6,886 people per square mile. Seattle was also rated the most educated city in the United States, with 52.7% of its residents over age 25 holding at least a bachelor's degree.[6] Many people have flocked to the Seattle area to work in what's called the "knowledge economy."[7]

Cleaning excrement off the street is racism

In Seattle, the Employee Hours Tax (EHT), was passed by the Seattle City Council in May 2018 and was signed into law by Democrat Mayor Jenny Durkan. The 9 member Seattle City Council has 8 Democrats and 1 Trotskyite socialist. The tax on businesses was set at a rate of $275 annually per employee to fund homeless services. Seattle city councilmen Larry Gossett objected to cleaning the sidewalks surrounding the courthouse because to pressure wash the sidewalks of urine and excrement, in the Democrat councilman's words, "is racist."[8]

In 2019 municipal elections, Amazon tried to rein in and undo the monster it helped create. Three weeks before the city council elections contributed a $1 million to an alleged "moderate" Democrat political action committee. The election pitted a slate of employer-backed candidates against progressives and socialists who promised to revive the failed “Amazon tax” and to impose rent control, legalize homeless camping, and abolish the Seattle Police Department. The Chamber of Commerce, united with moderate Democrats, neighborhood groups, and police unions, appeared on the brink of reform and a “return to responsible government.”

With the contribution figures such as Bernie Sanders and Elizabeth Warren decried Amazon's “out-of-control corporate greed” and promoted a message that Amazon was “trying to tilt the Seattle City Council elections in their favor.” The progressive and socialist candidates framed the election as a choice between Amazon and the #Resistance. Seattle voters turned out for the progressive-socialist slate. All but one of the most progressive candidates won their districts—including a Democratic Socialists of America candidate and a Trotskyite incumbent Kshama Sawant, who demands the nationalization of Boeing and Amazon. Seattle's City Journal reported,

The progressive-socialist alliance has wasted no time laying out an ambitious agenda. It includes ordinances for rent control, drug-consumption sites, decriminalization of prostitution, legalization of homeless encampments, defunding critical police programs, free public transit, and an array of new taxes, including a “mansion tax,” “excess compensation tax,” and an “Amazon tax” three times larger than the original levy that was repealed last year. Amazon tried to unseat Seattle’s progressive regime, but the progressives have only strengthened their hold on municipal power—and now they’re out for revenge.[10]

For nearly a month, starting in June 2020, the City of Seattle permitted anarchists and activists to seize six square blocks of the city’s Capitol Hill neighborhood, naming their new enclave the “Capitol Hill Autonomous Zone” (CHAZ) and then the “Capitol Hill Occupied Protest” (CHOP). Law enforcement and fire fighters were precluded from entering the territory. The Seattle Police Department was ordered to abandon their precinct within the CHOP. Person-related crime in the CHOP increased 525% from the same period of time in the same area the year before, including by Mayor Jenny Durkan’s own count “two additional homicides, 6 additional robberies, and 16 additional aggravated assaults (to include 2 additional non-fatal shootings).” The CHOP was allowed to stand for nearly a month, during which time two teenagers were shot and killed in the zone. The Seattle City Council, Mayor Jenny Durkan, and Washington Governor Jay Inslee publicly rejected federal involvement in law enforcement activities within the city of Seattle.[11] Antifa terrorists declared the Capitol Hill Autonomous Zone (CHAZ), established border walls and checkpoints, discriminated against illegal aliens, and engaged in police brutality against innocent protesters.[12][13] Antifa paramilitants seized land without the consent of the native inhabitants and colonized a seven-block radius in east Seattle, illegally imposing Stop and Frisk harassment and restrictions on residents.[14] Not since the Paris Commune has a libertarian anarchist state been declared in the West. Others compared it to an ISIS-style insurrectionist state.[15]

After a prolonged siege the Seattle Police Department abandoned its East Precinct building. In a private message to the department, Seattle Police Chief Carmen Best passed the buck upstairs:

“You fought for days to protect it. I asked you to stand on that line day in and day out, to be pelted with projectiles, to be screamed at, threatened, and in some cases hurt. Then to have a change of course nearly two weeks in — it seems like an insult on our community.”[16]

Several hundred demonstrators, led by Seattle City Council Socialist Alternative[17] Kshama Sawant, with a key to City Hall, opened the front door and let the protesters in. Sawant called for the resignation of Democrat mayor Jenny Durkan and the defunding of the Seattle Police Department after a march from the Capitol Hill Autonomous Zone. Sawant was backed by Democratic Socialists of America (DSA).[18] The DSA provided logistical support for the riots.[19] Sawant called for the importance of Black LGBTQIA+ women and other issues. At City Hall another speaker decried Sawant’s co-opting of the movement to push her own agenda.[20]

The speaker noted the whiteness of many speakers at recent protests. Protesters left City Hall chanting "Defund SPD" and headed back to the Capitol Hill Autonomous Zone, where protesters watched 13th, a documentary on the The New Jim Crow.

Community members were subjected to barricades set up by the protesters with some armed individuals running them as checkpoints in the neighborhood, a police spokesman said. “While they have a constitutionally protected right to bear arms there is no legal right for those arms to be used to intimidate community members.” Residents described a small number of people armed with rifles who have been seen serving as guards. Many businesses and residential buildings in the so called CHAZ hired private security staff. The entire area was lawless, and residents were left to fend for themselves. A social media posting from inside the illegally occupied territory read,

"Due to the police not being able to respond for fear of reprisal and the shear amount of police resources required that makes it possible to have any presents in our area, residents needed to have an emergency plan that does not involve 911. Whether it is contacting friends, family or driving someone or yourself to the emergency room. You can still call 911 for help with planning and dealing with emergencies, but they may ask that you attempt to make your way to one of their other locations or possibly deal with a significant delayed response.[21]

Civil disorder and vigilante justice erupted over a property rights dispute when a socialist stole an iPhone from a resident they claimed was "unwilling" to "share the wealth". 911 calls reporting violence and sex crimes increased 300% in four days in the area which Durkan seceded the area to terrorists.[22] Durkan illegally ordered the police to stand down and provided material support to the terrorists,[23] calling them "patriotic."

BLM and Antifa racists set fires at the Seattle juvenile detention facility. 21 police officers were injured.[24] The Seattle Chief of Police warned citizens that the police could not protect them after the Democrat city council politburo defunded riot-control measures.[25]

Seattle was the first of the liberal enclaves to be home to a "reefer vending machine", a vending machine where anyone can purchase marijuana, just like with soft drinks or candy.[26] This will undoubtedly lead to more children, teens and reckless adults becoming addicted to the illegal substance.

Landmarks include the Space Needle and the Pike Place Market.

In 1999 Seattle hosted the WTO at the Washington Convention Center on Pine Street, and found itself the locus of a large protest by anti-globalist activists. Very rapidly, however, anarchists took advantage of the fact that the police were overwhelmed and began destroying property and looting storefronts. The violence of the "Battle of Seattle" raged for several days.

On Ash Wednesday 2001, Seattle sustained damage in the large Nisqually Quake, which cracked the Highway 99 Viaduct and destroyed some vintage brick buildings in Pioneer Square.

Seattle is the home of the Discovery Institute, an influential conservative think tank.

The popular television show Frasier is set in Seattle.

A trolley line using former railroad track was operated by former Melbourne (Australia) trams from 1982 to 2005.

The city was also rather infamous for having a statue of Soviet dictator Vladimir Lenin on its public square since the 1990s.[27] On August 17, 2017, however, the mayor of Seattle Ed Murray has ordered for its removal.[28][29]