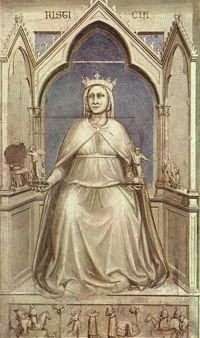 A personification of Justice, painted by Giotto.

Justice is the attribute of fairness, especially in a court of law. The concept of justice is often misunderstood, being easily confused with retribution or punishment. The phrase "bring him to justice" means arresting a suspect, trying him, and having him sentenced; but it has also been misused to refer to lynching.

Some people have slogan, "No justice, no peace" meaning that they will refuse to act peacefully until they receive justice. This, obviously, is the opposite of Gandhi's philosophy of Satyagraha. During the US Civil rights movement, however, Martin Luther King implored his followers to follow Gandhi's idea of suffering injustice willingly as a means of eradicating evil.

Justice seen as confronting evil with evil - or "stripe with stripe" - is based on an idea of balance. One bad turn deserves another. In a way, this is an improvement on the ancient notion of unlimited revenge. Someone offends you, and you kill him (or him and his whole family, village, etc.)

When Moses received the Ten Commandments from God, along with the other 600 laws, the concept of retribution was cemented in the ancient Jewish understanding. To modern Christians, it may seem harsh, but it was actually better to have "an eye for an eye, a tooth for a tooth" which is equal retribution than unregulated vengeance.

The idea of justice an vengeance has predominated in history, and it even remains today in Christian America.

In Christian tradition, justice is one of the four cardinal virtues. Biblically, justice is exemplified by just rulers such as King David, although one does not have to be a ruler or judge in order to act justly. Anyone can display the virtue of justice during everyday life by, for example, avoiding prejudice and deceit, behaving honorably during business dealings, and speaking out against injustice where it occurs.