The Muslim Brotherhood (Ikhwan al Muslimun or sometimes just Ikhwan[1]) was founded in 1928 after the dissolution of the Turkish Caliphate. It was booted out of Egypt after attempts on Abdel Nasser's life. From 1954 until 2015 its international headquarters were in London and have since relocated to Austria after it came under investigation for subversive activities against the UK government. It is considered a terrorist organization by the governments of Egypt, Russia, Saudi Arabia, United Arab Emirates, Bahrain, and Syria.

It has branches or affiliates in over 70 nations[2] including the United States. According to author Raymond Ibrahim the Muslim Brotherhood was founded and/or works under the cover of following organizations: the Council on American-Islamic Relations (CAIR), the Muslim Students’ Association (MSA), the Islamic Society of North America (ISNA), the Islamic Circle of North America (ICNA), and the Muslim American Society (MAS).[3] In addition to radical Islam, it was an extremist Arab nationalist organization.[5]

Al-Banna had pro-Nazi orientation,[6] was a devout admirer of Adolf Hitler and the Nazi regime.[7]

It is the longest running radical Islamic group globally, supporter of Hamas,[8][9] advocates Jihad as well as the spread of Sharia Law.[10] The organization which grew to encompass over 70 countries[11] including Syria, Sudan, and other Arab countries, was founded in Egypt by Hassan al-Banna in 1928 and has had many high-profile Islamic terrorist members, including the founder of modern-day jihad, Sayyid Qutb, Osama Bin Laden, and Egyptian terrorist mastermind and Al-Qaeda boss Ayman Al-Zawahiri.[12]

After the Second World War Muslim migrants created a mosque in the German city of Munich, which became the nerve center of the Muslim Brotherhood in post-war Europe. Mahmud Abouhalima, one of the perpetrators of the 1993 World Trade Center bombing frequently visited this mosque.[2]

In 1948, The Nuslim Brotherhood, its head, al-Bana, threatned: “If the Jewish state becomes a fact, and this is realized by the Arab peoples, they will drive the Jews who live in their midst into the sea.”[5]

The Brotherhood was booted out of Egypt in 1954 after a botched attempt to assassinate Egyptian President Abdul Nasser and found asylum in London where it assumed a veneer of an oppressed, non-violent, opposition political party. Members assassinated Nassar's successor, Anwar Sadat who made peace with Israel, in 1981. It has given rise to new more violent militias including Hamas, Gama’a al-Islamiyya, and Palestinian Islamic Jihad.[10] Hafez al-Assad, Bashar al-Assad's father, wiped out 20,000 members of the Brotherhood in an uprising against the Syrian government in 1982.[13] 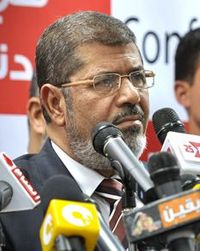 Despite being illegal under Egyptian law, the Muslim Brotherhood gained success in Egypt’s parliamentary elections, winning 20 percent of the assembly's seats in 2005.[10] After the fall of Egyptian president Hosni Mubarak, the Brotherhood came to power in 2011. The following year, Mohamed Morsi, a member of the organization, was elected as president of Egypt. During the election Christians were prevented from voting because of Brotherhood-led violence.[2] Morsi subsequently introduced Sharia law in his country and granted himself powers to legislate without judicial oversight. He was deposed by the Egyptian Deep State in 2013 and the Muslim Brotherhood was designated as terrorist organization while many of its members including Morsi and Mohamed Badie being arrested.

The Muslim Brotherhoods’ original goal was to found a total Islamic state which was not influenced by Western countries and would fellow strictly the teachings of the Koran. The organization has also been a leader indicting terrorism and propaganda against Israel and Jews. The Muslim Brotherhood's theme is:

Allah is our objective. "The messenger is our leader. Quran is our law. Jihad is our way. Dying in the way of Allah is our highest hope.[11]"

In 2004, the FBI seized documents relating to the plan to overthrow America titled, “An Explanatory Memorandum: On the General Strategic Goal for the Group.” [14]

The Ikhwan must understand that their work in America is a kind of grand jihad in eliminating and destroying the Western civilization from within...

The Syrian Islamic Brotherhood had existed since about 1937. It was banned from participating in political life by Syrian President Adib Shishakli in the early 1950s (MB then was known as the Islamic Socialist Front). Not until the seizure of power by the secular Ba'ath party in 1963 did it form into an opposition group. In February 1964 the Brotherhood instigated riots against Ba'ath party rule in the Islamist stronghold of Hama which were suppressed by the army.

Inspired by the Islamic Revolution in Iran the Brotherhood developed a plan to trigger a similar popular revolt to oust Ba'athist dictator Hafez al-Assad (father of Bashar al-Assad). Beginning in 1979 the Brotherhood forged links with Syrian Ba'athist dissidents and the Iraqi Ba'athist President Saddam Hussein for help in overthrowing Assad. The Iraqi regime provided covert assistance to the Brotherhood rebels in Aleppo, Damascus, and Hama. Saddam Hussein's government accused the Assad regime of human rights violations against the Muslim Brotherhood. According to Wikipedia, after the uprising was brutally crushed in the 1982 Hama Massacre one faction "for several years retained a military structure in Iraq, with backing from the [Iraqi] government."

The Muslim Brotherhood was later vilified by the Salafi theorist Abu Musab al-Suri in his 1991 treatise, Notes on the Jihadi experience in Syria. Among the Brotherhood's "crimes" was its "alliance with parties of infidelity, freethinking (zandaqa), and apostasy".[15]

In June 1980, the Brotherhood attempted to assassinate President Assad following which the government passed a law making membership of the Brotherhood a capital offence; the law is still in force today.