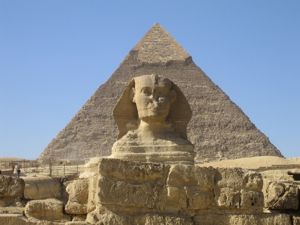 Pyramid and Sphinx, east of Cairo across the Nile (photograph taken by Ian Sewell)

Cairo is located in northeast Egypt, where the Nile branches into the Nile Delta flowing to the Mediterranean Sea.

Cairo ("Ky-roh") is the capital of Egypt and is home to over 16 million people.[1] Cairo sits in the upper part of Egypt on the bank of the Nile River. The city is still growing, though more slowly than in the past, as Egypt's population growth slows, and the movement of major employers, including many government institutions, to satellite cities such as "6th October", Giza and Helwan. It is believed that Jesus and the Holy Family lived a while in part of Old Cairo.

Technically, Cairo only refers to the city on the east bank of the Nile, the west bank being Giza, which is administratively separate. Cairo is part of a large built-up area that covers four governates and several cities. The city is typically called by the name of the country, Misr (مصر, Egypt, "Mezz-ruh" or "Masr").[2] However, the official name of Cairo is Al-Qāhirah (Arabic: القاهرة ), which means "The Vanquisher" (or "The Triumphant"). Most people in Cairo are Sunni Moslems, with fewer Shiite Moslems (the majority sect of Iraq), but there are also Christians, Jews, and Buddhists.

Cairo is located on the eastern bank and islands[2] of the Nile River in northern Egypt, near the point where the Nile leaves its desert-bound valley and splits into two branches which flow into the low-lying Nile Delta region.

The oldest part of the city (Old Cairo) is further east from the riverbank,[2] which formerly flooded almost every year before the Aswan Dam was built. From Old Cairo, the city spreads west, covering the agricultural lands next to the Nile. These newer, western areas were built in the layout style of Paris by Ismail the Magnificent, in the mid-19th century. They have wide boulevards, grand statues, public gardens, and the Cairo Zoo (with hundreds of exotic animals). The older eastern section of the city is more compressed: having expanded haphazardly over thousands of years, it has many small lanes and crowded tenements. While western Cairo is dominated by modern architecture and large government buildings, the eastern section of Cairo is filled with hundreds of ancient mosques which act as landmarks.

Manmade water systems have allowed Cairo to expand, even further east,[2] into the desert away from the Nile. Bridges link the banks to the Nile islands of Gezira ("ga-Zee-ra") and Roda, where many government buildings have been constructed and government officials live. Bridges also cross the Nile, connecting modern Cairo to the west-bank suburbs of Imbabah and Giza.

On the western edge of Giza, in the desert, is part of the ancient necropolis of Memphis[2] on the Giza plateau, with its three large pyramids, including the Great Pyramid of Giza, and 6 smaller pyramids. Nearly 11 miles (18 km) south from modern Cairo is the site of the ancient Egyptian city of Memphis and the necropolis of Saqqara ("Sa-Kah-ra", site of Djoser's Step Pyramid). Those areas were Cairo's ancient predecessors, when the population was still centered in that general geographical location.[2]

The main railway station of the conurbation is Rameses station in the Downtown district on the east bank of the river. It is Egypt's busiest railway interchange and the primary transport interchange for the Cairo region, being a hub for intercity, commuter and regional rail, local and regional bus services, the Heliopolis tram, and Metro lines 1 and 2. It is also the terminus for the Turbini high speed rail service to Alexandria.

Cairo has several other important rail stations, including Giza Station on the west bank, which acts a terminus for sleeper trains and some regional services, as well a s major stop for inter-city services heading to Middle and Upper Egypt. Ain Shams station in northern Cairo handles all services using the Suez line. Both these stations are also served by the Metro.

Cairo used to have an extensive tram network, but much of it has been lifted in recent decades and now only two systems run, both serving the north of the city. The Heliopolis tram dates to 1906 (the oldest on the continent), and was one of the first electric tram systems in the world. Sadly, the system is now run down, as development of the Metro has been deemed a better solution to the city's transportation issues. However, many people like the tram for its relaxed ride and airiness, despite its slow pace, and until Line 3 reaches Heliopolis, the tram is still the subrubs only rail based transport option. The system is a hybrid of street running and segregated. From its downtown terminus at Ramesses, it runs on a dedicated track, parallel to Metro Line 1, before parting with the Metro and entering Heliopolis suburb, where it splits into three branches, all running on street. The entire system uses 1000 mm gauge, the only system in Egypt to do so. Like the Metro, it takes power from overhead electric wires.

Slated a model system, the Metro is a source of great pride to many Egyptians. The only system of its kind on the continent and the entire Middle East, the Metro is clean, organised and efficient. It has 53 stations and carries over 700 million passengers a year. Two lines have been built so far, with Line 3 (with two branches and an airport link) currently under construction, and several more in planning. The Metro includes the only tunnel crossing the Nile at any point, on Line 2.

The Metro is unusual in its administration, in that it is not run by the city government transport authority. As it crosses governate and city borders, it is actually administered by Egypt National Railways, although its ticketing and branding are entirely separate. The Metro has a heavily subsidised flat fare of LE1 for every journey, which, again unusually, is purchased from a manned ticket office, although the ticket checking system is enforced by fully electronic ticket gate systems. Furthermore, some carriages (originally 1, now often 2) are reserved solely for women. Signs on the platform indicate where women only carriage stop, and on the cars, signs on the exterior above the doors indicate that it is a women only carriage.


Metro stations can be identified by a red "M" in a black, eight pointed star. "Metro" is spelt above the "M" in small Arabic script, in white cubic font. Major stations all have a distinctive decorative theme, unique to each station, often making use of modernist flavoured mosaics or tile work. The system is entirely bi-lingual in Arabic and English.

Cairo and its conurbation have a number of overlapping bus systems. The municipal authority has the most extensive network, branded "CTA". These buses are large single deckers with white colour scheme with the CTA logo displayed in black down the flanks. They operate on fixed routes, indicated by a three digit number. Most services run every few minutes, and some run 24 hours a day. Fares are 50pt for standard buses and LE2 for air conditioned services, where standing is not permitted, ensuring a more comfortable, less cramped journey. Bus services are always slower than the metro, due to the heavy congestion on many routes.

Private microbuses also operate and to some degree overlap with other services. Some of these also run 24 hours and can be quicker as they have much shorter loading and unloading times, as they carry few passengers.

Major stops, and all stops on certain key roads (such as Sh. Al Ahram) have modern shelters, with clearly printed route maps and tables, though unlike the Metro none of these, nor bus numbers, are bi-lingual.

Cairo International Airport is a major global hub, and the 2nd busiest airport on the continent. It has three terminals, including the brand new Terminal 3 for EgyptAir flights, and will be connected to Metro Line 3 in future, ending the long road journey to Downtown that plagues travellers. In the meantime the 6th October expressway tunnels have reduced this already, to some extent.

Cairo is EgyptAir's main hub for both domestic and international flights, with Alexandria being the secondary hub, operations at the latter being split between two airports. It is possible to fly direct to Cairo from almost all European and Middle Eastern capitals, to several cities in the Americas (mostly on the eastern coastline), and to southern and eastern Asia, where routes are improving. Connections to sub-Saharan Africa, Oceania and Central Asia are less well developed.

Domestically, EgyptAir offers very good service, with near hourly "shuttle" connections to most key cities using a fleet of brand new Embraer E170 jets. The carrier is the "flag carrier" of Egypt, and like the Metro, is a source of considerable national pride as an internationally well respected airline.

Giza is home to the Pyramids, the only remaining wonder of the world, built around 2500BC to glorify the Pharaohs. Millions of visitors come to visit them, and wonder at their construction. With these is the Solar Boat of Khufu, excavated from beside the Great Pyramid and found in almost perfect condition, disassembled. It has been assembled and now has its own dedicated museum on top of the original spot of its discovery.

Downtown Cairo houses the world-famous Egyptian Museum, which has the largest collection of Pharaonic artefacts in the world, including the famous treasure of Tutankhamun. One of the first curators of the museum, and the Egyptian Antiquities Organisation is buried in its grounds, which also house a pond planted with the now endangered Nile Lotus flower. The museum is one of the oldest in Africa, and was founded in the 1850's, though at a different location to its current home, which dates to the early 20th century, and was purpose built, though long ago exceeded its intended storage and display capacity.

Coptic Cairo is one of Cairo's oldest surviving quarters, dating to the Roman era, whose fortifications are still standing, and include much looted masonry from the Pharaonic cities of Memphis and Heliopolis, both nearby. Coptic Cairo is home to many famous Christian churches such as the "Hanging Church", named for its famous architecture. It is also home to the Cathedral of St. Joseph and the Coptic Museum, run by the Patriarchiate, and home to the largest museum collection of Coptic antiquities in the world. It was one of the first museums in Egpyt to make use of interactive media to present its exhibits via the internet, and has an extensive online catalogue to aid those researching artefacts of the true religion. Coptic Cairo also has several monasteries, and many work with city youth and help the poor of the city, as well as being involved in small-scale model enterprises. The area has seen much investment, of late, in being redeveloped to make it appealing to tourism and improve the quality of life for its residents, and to avoid the "donut effect" (of inner-city blight) that has been feared with the move of major employers to the new satellite towns.

Gezira Island is one of the most exclusive districts, and is home to many foreign embassies, the rich, and much of the city's green space. It is also home to some of Cairo's modern landmarks, the Cairo Opera House, and Cairo Tower, which is taller than the Great Pyramid in the desert to the west.