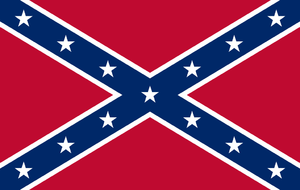 Rectangular Confederate battle flag, which became the most well-known flag after the Civil War's end.

Several Confederate flags have existed in history, the most recent one being the most well known. During the Civil War, three successive flags served as the official flag of the Confederate States of America. While segregationists and white supremacists have used the current flag in their activities, the flag's main purpose was to honor Confederate veterans and for Southern pride and heritage, and racist groups did not adopt the flag until decades later. These groups have no legitimate relation to the flag, which stands for states rights, Southern pride, and honor.[1]

The Stars and Bars, specifically when it had 13 stars.

The first official flag of the C.S.A. was called the Stars and Bars and was adopted in March 1861.[1] The flag was chosen because it resembled the Union flag.[2] However, the flag quickly became unpopular because it was hard to distinguish from the American flag on the battlefield, making it dangerous to use and causing much confusion.[1][2][3] Additionally, the flag's resemblance to the Union flag became a liability as the Confederates wanted to show their independence.[2] Confederate commanders using their own flags on the battlefield in response,[2] and the flag ceased being official in May 1863.[1]

On March 4, 1865, the third official flag of the C.S.A. was adopted.[1] It had the same design as the second flag except for a red stripe running down the fly end of the flag.[1] It remained the official flag until the end of the Confederacy later that year.[1]

In 1861, Confederate General P.G.T. Beauregard proposed changing the first official Confederate flag due to its similarity with the Union flag.[3] After the Confederate government rejected his idea, he then proposed instituting two official flags: the national flag that was already in use, and a battle flag.[3] This idea was accepted, and a battle flag was chosen.[3] This flag was known as the Southern Cross and closely resembled a previous contestant for the first official Confederate flag[3] designed by William Porcher Miles.[4] The flag became popular among the Confederate Army and the general population.[3] The Southern Cross is also known as the battle flag of the Army of Northern Virginia, commanded by Robert E. Lee.[3] Unlike the Confederate flag most used today, the Battle Flag was square-shaped rather than rectangular.[1][3]

In addition, numerous other flags used by the C.S.A. and by different regiments of the army.[3] The number of stars on the official flags changed as more states joined the Confederacy.

Immediately after the end of the Civil War, the Confederate flag was mainly used as a symbol of remembrance for Confederate soldiers who had fallen in battle.[2][4]

While some people, particularly leftists, believe the Confederate flag displays racism, the opposite is true.[1] In fact, the Ku Klux Klan rarely, if ever, used the flag in its first and second incarnations, in the 1860s–70s and 1915–20s, respectively.[2] The flag only started to be used extensively in the late 1930s and 1940s at the third incarnation of the racist, leftist Democrat group.[2] As mentioned above, the flag's true purpose was and still is states rights and Southern pride and honor, and hate groups had no legitimate connection to the flag other than shared geographic location.[1]

Around 1900, the Confederate flags, particularly the Battle Flag, became common and mainstream throughout the South.[2] This resurgence was related to the "Lost Cause of the Confederacy" movement, which saw the Civil War to be over states rights and the South's military defeat not to mean any defeat of Southern values.[5] The movement had little, if anything, to do with racism, regardless with the unbiblical realities of segregation in the South at the time.[5] Despite efforts by The United Confederate Veterans and the United Daughters of the Confederacy to promote the square-shaped flag used by the Army of Northern Virginia, the rectangular version used by the Army of Tennessee and the Confederate Navy became the most popular version for having the same shape as the Stars and Stripes and thus being the Southern equivalent.[2]

The Confederate flag continued to be used in honor of the Confederacy and its fallen soldiers during this time.[2]

Around the 1940s, Southerners began to meet non-Southerners more frequently, such as in U.S. military during World War II or in college football.[2] To convey their identity and pride, these Southerners used the Confederate flag.[2][4]

The Dixiecrats used the flag when they opposed the inclusion of a civil rights statement on the Democrat platform in 1948.[2] During this time and during the Civil Rights movement, Segregationists used the flag as a symbol in their opposition to the removal of liberal, racist, and unbiblical Jim Crow laws.[2] The United Daughters of the Confederacy saw that these groups were not using the flag as they intended, and they condemned their use of it and encouraged some Southern states to pass desecration laws against the state.[2] Those laws did not have much of an effect.[2] States rights and remembering fallen Confederate soldiers continued to be a large motive for flying the Confederate flag.[2]

The racist or segregationist use of the Confederate flag caused many blacks to turn against it.[2]

Several Southern states base their flags off one of the several Confederate flags.[6] While white supremacists (who are leftists) sometimes use the flag, states rights, Southern Pride, and honoring Confederate veterans remain the overwhelmingly predominant and only legitimate purposes of the flag.[1]

Leftist attempts at censure and distortion

Liberals have falsely claimed the Confederate flag is a symbol of racism, and they have been relentless in seeking to censor the flag and other Confederate symbols, even then they are historically relevant.[7][8]

In June 2015, a white supremacist with mental problems went into a black church and massacred several people inside. Although removing or banning the flag, like gun control, would solve nothing and only be a short-term emotionalist solution, many people, particularly leftists, called for the flag's removal. That call, like gun control, was a knee-jerk reaction to ban something they dislike, using a terrible event to do so without carefully examining the full picture. They acted hypocritically and tried to cast the blame on conservatives while blatantly distorting the true purpose of the flag.[9][10]

Liberals frequently display intolerance towards the Confederate flag. In one instance in an Illinois public school, a student was suspended for wearing a Confederate flag, even though the same school had a large homosexual rainbow flag hanging in a classroom.[11] A Wyoming school also banned the Confederate flag while allowing the homosexual flag.[12] In another instance, the flag was banned at a county fair in Wisconsin because a single person at the fair complained about it.[13]

In April 2019, New Jersey's governor removed the Mississippi flag from a local park because of the latter's flag's Confederate symbolism.[14][15]

The controversy over the Confederate flag is closely related to that over Confederate statues.[16]