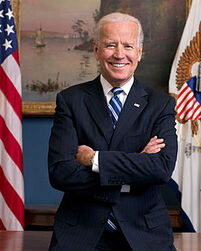 Joseph Robinette "Joe" Biden, Jr. (born November 20, 1942) is turning 77 in November 2019. He will be nearly 78 years old on Election Day 2020. Biden hasn't disclosed his medical history since 2008, when physicians found he had an irregular heartbeat.[1] Biden has long been troubled by health issues.[2][3] Biden has promised to release his medical records in the next several months.[4] (See also: Biden's age)

According to the British Medical Journal, "The brain’s capacity for memory, reasoning and comprehension skills (cognitive function) can start to deteriorate from age 45, finds research published on bmj.com today."[5]

Matthew Walther, a national correspondent for The Week, wrote about Biden's age:

The columnist Michael Goodwin wrote about Biden's performance during the Democrats’ third presidential primary debate: "Nearly all his efforts to make a point were swamped by a sudden change of direction mid-sentence, and then another change a few words later as a random thought popped into his head and out his mouth. None of his rivals needed to interrupt him — he did it to himself."[8]

After Biden's poor performance in Iowa, a Democratic county chair told The New York Times, "He’s pressing against Father Time, who is a very tough competitor."[9] The progressive Cenk Uygur, who is a supporter of Bernie Sanders, is angry that the mainstream press doesn't point out Biden's mental decline and does not call out Biden's lies (Joe Biden lying about being arrested with Nelson Mandela, etc.).[13]

Cenk Uyger says Biden is not going to win against Trump due to his mental decline and due to his lies being called out by the political right.[14]

A study indicated that individuals with prolonged grief syndrome showed a decrease in global cognitive function over time compared to a control group.[15]

Joe Biden's life has been greatly shaped by grief and he indicated that he has "wounds that don't ever really heal".[16][17][18]

The American Journal of Geriatric Psychiatry in a journal article entitled Prolonged Grief and Cognitive Decline: A Prospective Population-Based Study in Middle-Aged and Older Persons This really happened in August 2020, verbatim:

Interviewer: Have you taken a cognitive....


Biden: No I haven't taken the test. Why the hell would I take a test? C'mon, man....That's like saying you, you know, before you got in this program if you take a test were you're taking cocaine or not. What do you think? Huh? Are you a junkie? (laughs)
Interviewer: What do you say to President Trump who brags about his test and makes your mental state an issue for voters?


Biden: (laughs) Well, if he can't figure out the difference between an elephant and a lion, I don't know what the hell he's talking about. Did you watch that? Look, c'mon, man....I know you're trying to goad me. But I mean, I'm so forward-looking to have an opportunity to sit with the President, or stand with the President, and debates. There can be plenty of time. And by the way, as I joke with him, you know, I shouldn't say it, I'm going to say something, I don't, I probably shouldn't say. Anyway, I am, uh, I am very willing to let the American public judge my physical mental phyl...my physical as well as my mental fil... fitness.[22]

According to Biden at a speech in Michigan on September 9, 2020, Trump somehow caused a rise in the cost of "prescription jugs".[23]

At an interview with Chris Wallace, the following occurred:[24]

Wallace: Mr. Vice President, thank you, thanks for your time, please come back in less than thirteen years, sir.


Wallace: Alright. It's Chris, but anyway—


Biden: Oh Chris — I just did Chris— no no, I just did Chuck. I'd tell you what man, these are back-to-back. Anyway—

At the final presidential debate between Trump and Biden, the latter said at one point:[25]

Abraham Lincoln here is one of the most racist presidents we've had in modern history.

He also referred to the Proud Boys as the "Poor Boys".[25]

At a Pennsylvania campaign event on October 30, 2020, Biden mumbled a bizarre short string of gibberish.[27]

At a campaign event in Flint, Michigan, Biden said:[28]

Donald Trump thinks health care is a privilege, Barack and I think it’s a right to have badakathcare (sic).

Biden has referred to himself as "Finnegan Biden's grandmom".[29] He has also called Donald Trump "Donald care".[30]