From Conservapedia
(Redirected from Brezhnev)
Jump to: navigation, search

Leonid Brezhnev head of the Soviet Union and remained so until his death in 1982.

Brezhnev had a stroke in March 1982 and died of a heart attack in November.[1]

Leonid Brezhnev (1906 - 1982) was part of an internal coup that stripped the Soviet Union's leader, Nikita Khrushchev, of power in 1964 because of Khruschev's reform efforts. Brezhnev became the new head of the Soviet Union and remained so until his death in 1982.[2]

Brezhnev initially continued Khruschev's policy of peaceful co-existence and joined with U.S. President Richard Nixon in detente while continuing active support for armed national liberation movements around the world. In 1980 the Soviet Politburo presided over by Brezhnev initiated the Soviet-Afghan War in an effort to create a Soviet Socialist Republic of Afghanistan along atheist and secular models, subservient to the Soviet Union as another satellite-client state. 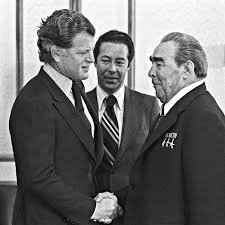 Brezhnev was the original author and planner of the nuclear freeze movement which became quite popular and fashionable in the West among liberals such as Ted Kennedy and Barack Obama because of its anti-NATO, anti-U.S. military spending and pro-socialist welfare stance.

The Brezhnev years are known as the Era of Stagnation and marked by rampant corruption.

He was succeeded by Yuri Andropov.

In 1968 reform-minded elements of the Communist Party of Czechoslovakia rapidly began to liberalize their rule, loosen censorship, and strengthen Western ties. In response, Soviet and other Warsaw Pact troops entered Czechoslovakia and installed a new regime. Out of these events arose the so-called Brezhnev Doctrine, which warned that the Soviet Union would act to maintain its hegemony in Eastern Europe. Soviet suppression of the reform movement reduced blatant gestures of defiance on the part of Romania and served as a threatening example to the Polish Solidarity trade union movement in 1980. But it also helped disillusion communist parties in Western Europe to the extent that by 1977 most of the leading parties embraced Eurocommunism, which freed them to pursue political programs independent of Moscow's dictates.