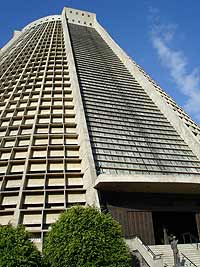 A cathedral is a church which is the main church of a religious diocese and the seat of the local bishop. In everyday language, large churches that are not held by a bishop are occasionally also incorrectly called cathedrals. Historically, in England a cathedral was considered the status symbol that made of a town a city. Certain cathedrals, and churches, prior to Henry VIII, were attached to monasteries or abbeys. These were called minsters; and their origins are seen today in their names: Westminster, York Minster, Beverley Minster etc.,

Cathedrals are named after the cathedra, which in Catholic, Orthodox and Anglican cathedrals is the bishop's throne and seat of authority. In Catholicism, official decrees and laws promulgated by a bishop are said to come ex cathedra.

Even in modern usage, we can see "seat" used this way " The seat of Government in the U.S. is Washington D.C."

All of this understanding of Cathedra, meaning "seat", linked up with the exercise of authority comes from the Hebrew and Jewish context. The "position" of authority is not standing (to preach) as it is in modern churches, but rather sitting. It is not clear why this is so. Some suggestions: that authority was naturally derived from experienced distilled from age, and sitting was natural to older men; that sitting is the natural position of derived authority from Scripture which is spread before one in the form of Scrolls. Whatever the merit in these suggestions, sitting was the position of authority in 1st century Judaism. This probably influenced the posturing of the bishops of slightly later centuries as sitting with their clergy clustered aroung them. Synagogues had within them the "Seat of Moses" . One can still see the Seat of Moses on the right side near the entrance of the ruins of the Chorazin synagogue on the hill above the north shore of the Sea of Galilee. Jesus gave a general caution to His twelve, His Apostles and Apprentices, not to be disobedient to what the Pharisees say - just don't do what they do! And it is they that now sit "on the seat of Moses".

And so the "greater than Moses" ascended also a hill, as Moses did in Sinai, and He "sat down" and they gathered around Him to hear, and "He opened His mouth and said" (The only way you can say, of course, is by opening the mouth, but here this is the Biblical indicator of "saying authoritatively" {Hebrew - VaYa'an va Y'omer}) The Torah of the Kingdom of Heaven through the Messiah, a Torah at once fulfilling and then transcending the law of Moses given at Sinai. Blessed are the poor in spirit...