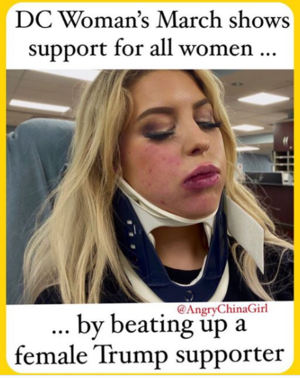 The Women's March, Inc. is a leftist feminist organization founded on January 21, 2017 in Washington D.C. to protest the inauguration of President Donald Trump. It was organized by Tamika Mallory and Linda Sarsour who have longstanding associations with the nation's leading anti-Semitic demagogue, Louis Farrakhan.[2] It includes multiple pro-abortion, pro-globalist and pro-elitist marchers, as well as Hollywood celebrities and members of the entertainment industry.

Celebrity participants at the 2017 event included singer/actress/activist Madonna (who controversially commented about wanting to bomb a Trump-occupied White House during an obscenity-filled rant,[3][4] which led to her becoming the subject of a criminal investigation by the Secret Service for her comments[5][6] and calls for her arrest,[7][8] to which she initially responded with a defiant and obscene message on her Twitter account before she deleted the message and backed down), actress Melissa Benoist, who plays Kara Danvers/Kara Zor-El on the CW and former CBS series Supergirl (who carried a sign during the Women's March containing a very crass message saying "Hey Donald, Don't Try To Grab My Pussy–It's Made Of Steel" and later posting it on her Instagram page[9]), and actress Ashley Judd (who delivered an unhinged and misandrist anti-Trump rant at the rally[5][10][11] and later claimed in a Facebook post to have been "intimidated" by an elderly Trump supporter at a University of Kentucky college basketball tournament game,[12] which drew overwhelming criticism against her on both Facebook and Twitter in response).

According to a claim by the mainstream media, more people had joined the demonstration than attended Trump's inauguration.[13][14]

The event was sponsored by far-Left groups supported by leftist billionaire, tax evader and wanted criminal George Soros[15] and organized by social justice warrior and self-proclaimed "Palestinian-American" Linda Sarsour[16] (who was later arrested at a subsequent "Day Without Women" protest[17]) and Islamic terrorist and self-claimed "Palestinian" Rasmea Odeh[18] (who was later stripped of her American citizenship as a result of immigration fraud for lying about her terrorist ties and is due to be deported back to her native Jordan[19]), among others. Considering who some of the march's organizers and some of their sponsors are (including CAIR),[20] however, their involvement is ironic given that under their ideology of Islam, the women's rights they claim to fight for are all but non-existent. Among other speakers at the event were convicted felon Donna Hylton (who spent 25 years in prison for her part in the kidnapping, rape, torture and murder of a real estate developer,[21] yet claimed to be a "victim" of "misogyny" and showed no remorse for her crimes, neither did she accept responsibility for them).

This "women's march" was largely just a sham intended to bash President Trump and promote far-Left and feminist ideology that hundreds of millions of women oppose.[22] Additionally, pro-life groups were excluded from the D.C. march, even though they support the humane principle of opposing legalized murder.[22]

On the day of the march, President Donald Trump wrote on Twitter "Beautiful weather all over our great country, a perfect day for all Women to March. Get out there now to celebrate the historic milestones and unprecedented economic success and wealth creation that has taken place over the last 12 months. Lowest female unemployment in 18 years!"[23]

In February, Mallory attended a Chicago speech given by Nation of Islam leader Louis Farrakhan, which Farrakhan called Jews “children of the devil” and members of the “synagogue of Satan.” While no formal attempt at an explanation was made by Women's March, Inc., Mallory engaged with critics on social media about the matter. On Twitter she posted: “If your leader does not have the same enemies as Jesus, they may not be THE leader!”[24]

Shortly before Mallory was to be the keynote speaker at a June 2018 event in Australia, the organization cancelled her appearance following protests from Jewish groups regarding two recent statements by Mallory. After returning from a trip to Israel, Mallory declared the founding of the State of Israel in 1948 a “human rights crime.”[25]

During April 2018, Mallory accused the Anti-Defamation League of racial bias. The ADL had been enlisted by Starbucks to assist the company in a nationwide sensitivity training, following a controversy that had arisen when a Philadelphia store manager called police on two black men in the store. Mallory condemned the company's selection of the Jewish organization as one of its training groups. “Starbucks was on a decent track until they enlisted the Anti Defamation League to build their anti-bias training,” said Mallory in a Twitter statement calling for a boycott of Starbucks. “The ADL is CONSTANTLY attacking black and brown people.” In follow-up comments she stated: “The ADL sends US police to Israel to learn their military practices. This is deeply troubling. Let’s not even talk abt their attacks against .@blacklivesmatter.” Starbucks had also sought guidance from the NAACP Legal Defense and Education Fund and former U.S. Attorney General Eric Holder.

Planned Parenthood Action Fund flew in "storytellers" to the Supreme Court nomination hearings of Justice Brett Kavanaugh. They came from as far away as Alaska and North Dakota. Winnie Wong, a senior advisor to the Women's March, explained their carefully coordinated messages. Members going into the hearing room were given "a script where we suggest certain messaging that may resonate more". The storytellers’ travel and accommodations were paid for, as were their legal aid and bail if they were arrested, which was generally the goal. Later in the hearings, the organizers of the protesters—the Women's March and the Center for Popular Democracy— were warning activists that being arrested three times might lead to a night in jail. The group raised sums of more than six figures to finance the protests. "This is well-organized and scripted," said Wong, "This isn’t chaos."[26]

Two directors of the U.S.-based Jewish NGO the Anti-Defamation League, along with the president of the Zionist Organization of America, have criticized Sarsour's stance on Israel. Jonathan Greenblatt, the ADL's director, has said that Sarsour's support of BDS "encourages and spreads anti-Semitism".[36] Sarsour has refused to condemn Farrakhan's extremely anti-Semitic rhetoric.[37] Sarsour has called for adherents of Islam to carry out jihad against President Trump and has praised Imam Siraj Wahhaj,[38] named in court documents as an alleged co-conspirator in the 1993 World Trade Center bombing. Awad is co-founder and Executive Director of the Council on American Islamic Relations (CAIR), which has direct ties to Hamas.

Official partners of the Women's March

The official website of the Women's March lists the following organizations as its partners:[39]