From Conservapedia
(Redirected from Reimagine the police)
Jump to: navigation, search 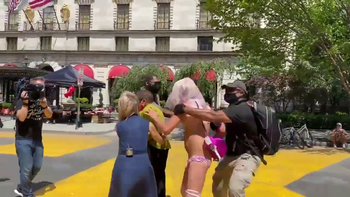 On the heels of record job growth as America re-opened from coronavirus lockdowns,[17] Democrats wanted to send signals to investors and job creators with threats of more lawlessness. If the axis powers are successful and the Democrats take power in November, the infighting will immediately begin but will not last long. The leftists, including communist organizations Antifa and Black Lives Matter, will lose their globalist funding and dissolve into a paramilitary enforcement organization similar to Hitler’s brownshirts. The foolish sycophants who support leftism and the anarchy it created will be eliminated because there is no place in globalism’s New World Order for agitators.[19]

The Democrat-controlled Minneapolis City Council told citizens to be ready to give up wallets and cell phones to criminals.[20] A Black father was murdered in a drive-by shooting while walking with his 7 year old daughter shortly after $1 billion was cut from police funding to meet the demands of Black Lives Matter.[21]

Raheem Kassam and Gatewaypundit exposed Black Lives Matter as a money laundering scheme for the Democratic National Committee.[22] On the BLM homepage, which features a “Defund The Police” petition front and center, if a user chooses to donate, they’re rerouted to a site hosted by ActBlue, the DNC's official payment portal.[23] ActBlue claims to be tax exempt organization and all donations to it are tax-deductable. The terms and conditions also link to ActBlue and mention “Campaign Finance Laws”.[24] Joe Biden is a top beneficiary of the ActBlue’s fundraising efforts.[25]

Violent crime - particularly shootings and homicides - spiked across major U.S. cities in what one law professor dubbed the "Minneapolis effect." Paul Cassell, a professor at S.J. Quinney College of Law at the University of Utah, explained the phenomenon in a research paper titled "Explaining the Recent Homicide Spikes in U.S. Cities: The 'Minneapolis Effect' and the Decline in Proactive Policing."

Cities like Chicago, New York City, Philadelphia, Milwaukee and Detroit have seen spikes in homicides, aggravated assault and gun assaults this year, according to a July study by the nonpartisan National Commission on COVID-19 and Criminal Justice (NCCCJ).[27] Cassell said the end result is 710 additional homicides and 2,800 more shootings in the U.S. And the professor attributes “several hundred” of the deaths directly to the war on police.

With cities like New York City, moving to defund police by cutting their budgets, or otherwise redirecting funding to social services, this is having an impact as well.

Four weeks into the nationwide riots, not a single Democrat at the federal, state, or local level condemned the violence and attacks on innocent people.[29] Thyblackman.com observed: Albuquerque police officer Ryan Holets and his wife adopted the newborn baby of a homeless heroin and methamphetamine addict.[32]