George Wallace (August 25, 1919 - September 13, 1998) was a pro-segregationist governor of Alabama. He gained national attention by "standing in the schoolhouse door" to stop the integration of Alabama schools (then he stepped aside). He ran unsuccessfully for President of the United States four times, three times seeking the Democrat Party nomination, (1964, 1972, 1976), and once running as an independent (1968). He carried blue collar white Southerners and rural white Southerners in the United States presidential election, 1968, but his appeal to blue collar northern Democrats was blunted by labor unions who vehemently attacked him as a dangerous and reckless racist demagogue.

In his first run for governor, in 1958, he ran as a Democrat as a moderate, supported by the NAACP, and lost badly.

Realizing that a moderate Democrat had no chance to win in Alabama, he became an ardent supporter of segregation, with the vow, “segregation now, segregation tomorrow, segregation forever”[2]; four years later with his hardline stance, he won. Jesse Jackson asks for Gov. George Wallace's support in his presidential bid. The two had been snubbed by the Democratic party establishment, Wallace in 1968 and Jackson in 1988.

An assassination attempt in 1972 by Arthur Bremer left him partially disabled. In the late 1970s Wallace became a born-again Christian, renouncing his segregationist policies and apologizing for his past. After his change, he became popular within the African American community, a position of closeness that he would retain until his death. 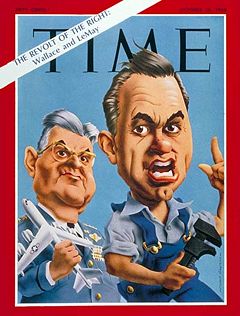 In 1991, Wallace asked the question "The media has rehabilitated Johnson, why won't it rehabilitate me?",[3] in reference to how the liberal media overlook the past positions of Lyndon Johnson. After Wallace's passing, the media have indeed rehabilitated him, though likely not in the way he hoped they would. It is not uncommon for dishonest liberal media journalists and others to insinuate[4][5] or outright claim[6][7][8][9] that Wallace was a "Republican", even though he was always a lifelong Democrat.[10][11]