Guahar is said to have been removed from her position in charge of FISA applications immediately after IG Michael Horowitz submitted his first draft report to Attorney General Bill Barr for classification review. Gauhar now reportedly works for Boeing.[1] The fix was in: Hillary Clinton was the intellectual property lawyer for a company that peddled spying software to banks on behalf of the US intelligence community since 1978 through her friend, Mary Jacoby, wife of FusionGPS founder Glenn Simpson

Tashina Gauhar was the Deputy Attorney General’s national security adviser and deputy assistant attorney general for intelligence since 2009. Tash was at the DOJ since 2001, and she formerly served as assistant counsel and chief of operations in what was then called the Office of Intelligence Policy and Review. She worked for DAG Rosenstein as she did for DAG Sally Yates. Tash Gauhar was the DAG’s executor and enforcer for national security.

Once Jeff Sessions recused, Guahar became the internal coordinator inside Main Justice who was the link between the special counsel Robert Mueller and the resources of the entire Department of Justice. Rosenstein’s testified he exercised no oversight of the Mueller team. Everything flowed through Guahar while she protected the Andrew Weissmann, Aaron Zebley, Brendon Van Grack, et al team as they went about targeting the Trump administration. These were the usurpers embedded inside Main Justice while carrying out the “insurance policy” mission.

Tashina required all of the AG packages for foreign policy appointments to go through her.

As the DOJ point on national security, only Gauhar received email notification about NSC meetings. During her tenure she did not always pass those notifications along, so the AG (Sessions) both missed NSC meetings and went unprepared when she let the notifications wait until the last minute.

She was very close to the Counter Intelligence division and came to David Laufman’s defense. David Laufman was a DOJ-NSD lawyer who later became the attorney for Monica McLean, the FBI public information officer who wrote the complaint letter against Justice Kavanaugh with Christine Blasey Ford.

Tashina is reported to have attempted to get access to highly compartmentalized NSA information, and lied about being an appropriately cleared recipient.

Tashina Gauhar was also the person who retrieved the transcripts (tech cuts) of Gen. Flynn’s conversations with Sergey Kislyak, and she was assisting Mary McCord (DOJ) and Sally Yates at the meeting with White House Counsel Don McGahn.

Tashina Gauhar was deeply involved in the Iran JCPOA (Joint Comprehensive Plan of Action) deal and the side agreements within the Iran nuke deal.

Tashina Gauhar was one of a select few people to convince the AG that he should recuse himself.

Gauhar told the FBI not to have any public information campaign targeting private companies and educating them about dual use technologies.

Tashina Gauhar attended NSC meetings during the Obama Administration representing DOJ. Tashina also knows all about the Uranium One deal.

Tashina Gauhar blocked the AG’s office from getting Senior Executive Service (SES) people. The AG had three SES people and the DAG had nine.

Tashina Gauhar was put in charge of reviewing the classified material President Trump ordered be passed to Congress, and she was the liaison between the Deputy AG (Rosenstein) and the Office of Inspector General (OIG) for national security. Nellie Ohr (left) and Christopher Steele (right) collaborated on the Clinton-Steele dossier. Nellie Ohr is the wife of Obama Associate Deputy Attorney General Bruce Ohr. Steele is an agent of a foreign power hired by Hillary Clinton to influence the outcome of the 2016 election and affect the removal of a sitting president.

Whitewashing Hillary Clinton's mishandling and destruction of classified documents committed the Obama DOJ to the election of Hillary Clinton as president in 2016. Half the reason was covering up President Obama's knowledge and involvement in the scheme, being that Obama had communicated with Clinton at least 30 times through her illegal server, including with her from the territory of Russia where her Blackberry was hacked from Russian cellphone towers and was a national security breach.[2]

On April 18, 2016 NSA director Adm. Mike Rogers terminated FBI contractor access to the FISA database after auditors determined a pattern of abuse which exploded in late 2015 and early 2016.[3][4] Over 5000 American citizens' constitutional and civil rights were systematically being violated by illegal FISA 702 search queries. The unnamed persons whose rights were violated are people associated with the Trump campaign, including Michael Cohen.

The following day Mary Jacoby, wife of FusionGPS founder Glenn Simpson, met with Obama officials in the White House.[5] FusionGPS is suspected of being one of the FBI contractors that the FISA court and NSA determined were performing illegal 702 search queries on American citizens.

The next week Tash Gauhar attended two all day White House meetings. FBI Counsel James Baker, Trisha B Anderson (FBI) and other DOJ FISA attorneys were also in attendance.[6][7][8][9] Five days after that the DNC and Clinton campaign hired FusionGPS to do 'cash for trash' on Donald Trump.[10]

Nellie Ohr and the Steele dossier

Having lost contractor access, FusionGPS then hired Nellie Ohr, wife of Associate Deputy Attorney General Bruce Ohr, to work with Christopher Steele on the Steele dossier. Nellie had a security clearance for FISA access as an ex-CIA Russia expert. Nellie passed raw FISA data to Steele which contained dates and times of travel which could be authenticated to give the dossier credibility. Steele then embellished itineraries with imaginary rendezvous with KGB agents and prostitutes to smear the Trump campaign.

Laundering illegal surveillance evidence through FusionGPS served one more purpose for the Obama DOJ and FBI: the Steele dossier fictions coming from outside the government, and leaked to mainstream fake news organizations, gave the appearance of independent probable cause to present to the FISA court to legitimize the Obama administration's illegal domestic spying. 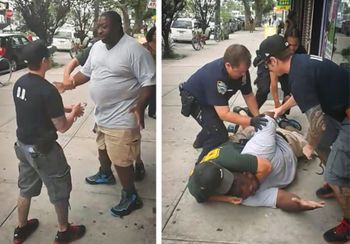 Death of black man that played a role in the 2016 election. The Obama DOJ threatened to re-open the 2014 Eric Garner case with federal civil rights charges against police if New York officials didn't back off the Weiner laptop.

Gauhar was one of three individuals appointed to review the Weiner laptop in September 2016, which contained all Hillary Clinton missing emails, including those dating back to her appointment before Clinton assumed office. Guahar instructed the US Attorney's office of the Southern District of New York (SDNY), that if the New York FBI field office and local New York police and prosecutors persisted in looking into the pedophilia charges against Anthony Weiner, Clinton Foundation corruption, and the corrupt activities of Secretary of State Hillary Clinton and the Obama FBI, the Obama DOJ would bring federal civil rights charges against members of the New York Police Department (NYPD) in the death of an African American, Eric Garner, who died while in police custody for selling cigarettes.

The Weiner laptop in fact was never examined until the day after the 2016 election. Nonetheless, James Comey issued a public statement four days before the election stating that the laptop had been examined, and no incriminating evidence found.

In Obama's first year Marc Ambinder of The Atlantic reported

"In a pro-forma press release today, the Justice Department’s National Security Division (NSD) released the names of its leadership today. Reporting to David Kris, the assistant attorney general in charge of the NSD, are several credentialed national security lawyers with significant connections to the Democratic Party. But there are also officials — Brad Weigman, Sheryl Walter, Tanisha Guahar [sic] Leonard Bailey, Carol Cordero and George Toscas — who have served more than one president."[13][14]

"We were separate in almost every way," said George Z. Toscas, who is the deputy assistant attorney general over counterterrorism and counterespionage.

The new division, launched on Sept. 26, 2006, was designed to change that. Intelligence lawyers and criminal prosecutors now work together when a threat is identified - in partnership with U.S. attorneys' offices and the FBI - in what are considered broad national security investigations. Toscas and Tashina Gauhar, the deputy assistant attorney general for intelligence, have offices next to each other and say they are in constant communication. The division is the liaison between Justice Department headquarters and the intelligence community."[15]

The team of Toscas and Gauhar, under President Obama, took revisions of the Foreign Intelligence Surveillance Act and processes enabled by the Patriot Act,[16] - intended to target al-Qaeda - and applied them to a Republican presidential candidate, labelling the candidate and his organization a "threat to national security".