Barney Frank (born March 31, 1940), a Boston-liberal American Democratic politician, is a former multi-term Representative from Massachusetts, representing districts in Boston from 1981 to 2013. Prior to that he served in the Massachusetts House of Representatives. He was one of the few openly homosexual members of Congress and he only revealed his homosexual proclivities several years after he had been elected to the position. Frank was the Chairman of the Financial Services Committee, a position he has held since 2007.[1] He has also held teaching positions at the University of Massachusetts, the John F. Kennedy School of Government at Harvard, and at Boston University.

He announced in November 2011 that he would retire from Congress.

Frank "married" his homosexual partner Jim Ready in July 2012.[2] By his own admission, Barney Frank had a male prostitute living with him, and ran a prostitution ring out of his Washington D.C. apartment. Frank's name was also brought up in a court testimony as being involved in a pedophile ring, and was accused of haing sexual relations with a boy who was brought to Frank's home in Massachusetts.[3][4]

In the midst of the financial crisis of 2008, it was revealed that Frank's former homosexual partner,[5] an executive at Fannie Mae, had been one of the foreleaders to deregulate the lending restrictions on the agency and that Frank may have acted through a conflict of interest in the 1990s.[6]

Through a Freedom of Information Act lawsuit filed against Treasury, Judicial Watch received documents from the U.S. Department of Treasury about the controversial $12 million bailout grant provided to Boston-based OneUnited Bank. Internal Treasury emails describe the substandard condition of OneUnited prior to the taxpayer funded bailout. OneUnited Bank was in deep trouble due to incompetence and mismanagement. Government officials knew about these problematic issues, but they bent the rules and "invested" taxpayer funds in the floundering enterprise, which allegedly occurred at the unethical behest of Representatives Maxine Waters and Barney Frank.[7]

Statements prior to financial meltdown

As posted on Pajamasmedia,[9] “The Bush administration today recommended the most significant regulatory overhaul in the housing finance industry since the savings and loan crisis a decade ago,” The New York Times, September 11, 2003.

But someone intervened to stymie the Bush administration. Who? The New York Times reports:

Supporters of the companies said efforts to regulate the lenders tightly under those agencies might diminish their ability to finance loans for lower-income families. . . . “These two entities — Fannie Mae and Freddie Mac — are not facing any kind of financial crisis,” said Representative Barney Frank of Massachusetts, the ranking Democrat on the Financial Services Committee. “The more people exaggerate these problems, the more pressure there is on these companies, the less we will see in terms of affordable housing.”

As shown on CSPAN in 2004, Frank said at Office of the Federal Housing Enterprise Oversite (OFHEO) hearing regarding the report of illegal activity by Fannie Mae does not "raise safety and soundness of Fannie Mae investments problems at issue". [10] 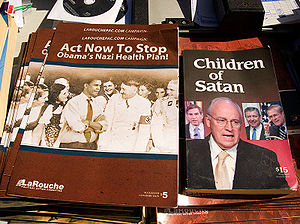 Frank became abusive to a constituent at a townhalll meeting carrying a sign produced by the organization of two time Democratic presidential candidate Lyndon LaRouche.

Barney Frank says he wants some of those responsible for our current financial meltdown to be prosecuted. Investors Business Daily writes "it takes some chutzpah for someone such as Frank to suggest that he'll seek prosecutions for those behind the housing and financial crunch," and "For Frank, perhaps more than any single individual in private or public life, is responsible for both the housing market mess and subsequent bank disaster." [11]

In August 2009 during the Congressional Summer break at a townhall meeting on Obamacare, in response to questions from voters Frank displayed an ill temper by being abusive as he exploded at a constituent who was carrying a poster of President Obama produced by the Lyndon LaRouche organization. [2]

The House of Representatives voted overwhelmingly to defund ACORN, 345-75 on September 17, 2009. Seventy-five Democrats stood with ACORN while ACORN's biggest cheerleader Barney Frank decided not to cast a vote.[12]

Frank sponsored a bill to decriminalize marijuana for medical purposes. Also, Frank was present when authorities arrested his same-sex partner for marijuana possession, cultivation and use of drug paraphernalia in 2007.[13] He claimed he was unaware his partner had marijuana plants and that he wouldn't know what marijuana plants looked like[14] despite having personally introduced two pro-marijuana bills to Congress earlier in the year.[15]

Liberals hold contempt for conservative women and call them either crazy or stupid. Like a child, Frank insults both Michele Bachmann and the average American citizen protesting government-run healthcare,[16]

Frank's arrogance shows his disdain for the people again as he spoke to liberal shill Rachel Maddow about March 20 Tea party protesters in Washington D.C.[17]

"I don't got a lot of respect for these people, to be honest."