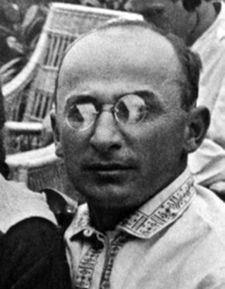 Lavrenty Beria (1899-1953) was the head of the Soviet security apparatus under Stalin and a rapist.[1] Appointed deputy head of the NKVD (secret police) in 1938, he helped carry out the Stalinist purges. Promoted head of the NKVD in November 1938, he then purged that organization. One of the victims was its former chief, Yezhov, who was executed in 1940. In the 1940s Beria oversaw the Soviet atomic weaponry program, and built up an espionage network in the United States and Europe. In 1946 he resigned as head of the NKVD but maintained overall control of security as deputy Prime Minister.

Following Stalin's death on 5 March 1953, in which Beria may have been implicated in causing,[2][3] Beria was appointed First deputy Prime Minister, and ranked second in the Soviet hierarchy under his ally Georgy Malenkov. However, Nikita Khrushchev and Nikolai Bulganain won Malenkov over to their proposals to depose Beria following the 1953 uprising in East Germany. Beria was arrested in June 1953, and was executed by firing squad on 23 December 1953, and was later cremated and promptly buried in a forest near Moscow. Ironically, his final moments resembled those of Nikolai Yezhov, the former NKVD head that he replaced, which was pleading to be spared and even falling on the ground.

Beria was an atheist. In addition, one of his more notorious actions as a rapist was, after arresting a woman and releasing her after raping her, gives her a bunch of flowers, the implied threat being that she either treat the affair as consensual (accept the flowers), or otherwise be arrested and "disappeared."

In the 2017 film The Death of Stalin, Simon Russell Beale portrayed Beria.