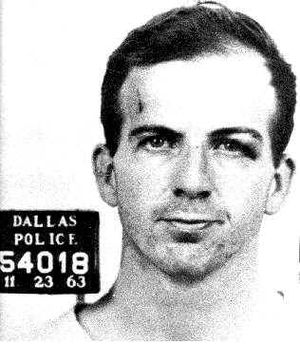 Lee Harvey Oswald (October 18, 1939 - November 24, 1963) born in New Orleans, Louisiana, was a self-proclaimed Marxist who became notorious for his assassination of John F. Kennedy. The Warren Commission, anxious to close the case, declared that Oswald acted alone and was the sole assassin of President John F. Kennedy in Dallas, Texas on November 22, 1963. But Oswald was a lifelong Marxist who at one point defected to the Soviet Union, and yet was inexplicably allowed back into the United States to reside in New Orleans in the summer of 1963 before killing the president later that year.

In April 1963 Oswald stalked the home of Major General Edwin A. Walker, an outspoken anti-communist, and attempted unsuccessfully to murder him with a rifle shot into his home. A few months later, in September in Mexico City, Oswald met with KGB agents and was apparently referring to that incident when he bragged about having "carried out a secret mission."[1]

In 1959 Oswald defected to the communist Soviet Union, lived there for 2 1/2 years, and applied to become a Soviet citizen.[2] Oswald married the niece of a KGB colonel there.[3] Declassified CIA documents dating back to the assassination that were released in 2015 revealed that, among other things, the CIA found out on September 28, 1963 that Oswald prior to assassinating Kennedy proceeded to pay a visit to the Soviet and Cuban embassies in an attempt to gain visas, indicating he had plans to leave the country very soon.[4] Researchers Russo and Molton interviewed a revolutionary companero of Fidel's who went by the name “Oscar Marino,” a senior Cuban spy, a founder of G2, who acknowledged encouraging Oswald to assassinate Kennedy during his 1963 Mexico City visit (and giving him expenses).[5]

Oswald was then himself murdered in front of live television cameras on November 24, 1963, by Dallas nightclub owner Jack Ruby.

The Most Rejected Man of His Time

James Dobson wrote a short story speculating about non-ideological reasons for Oswald's crime, but of course millions of people endure similar rejection and yet commit no crimes:

"He began his life with all the classic handicaps and disadvantages. His mother was a dominating woman who found it difficult to love anyone. She gave him no affection, no training and no discipline during his early years and even forbade him to call her while she was at work."

"When he was 13, a school psychologist commented that he probably didn't even know the meaning of the word "love." During adolescence, the girls would have nothing to do with him and he fought with the boys."

"After failing at every pursuit, including a stint in the United States Marine Corps, he fled the country. He married a Russian girl, but she also began to hold him in contempt. She could outfight him, and she learned to bully him. Finally, she forced him to leave."

"After days of loneliness, he went home, fell on his knees and literally begged her to take him back. He wept at her feet, but she laughed at him and made fun of his sexual impotency in front of a friend. Finally, he pleaded no more. No one wanted him. No one had ever wanted him. He was perhaps the most rejected man of his time."

"The next day, he was a strangely different man. He arose, went to the garage, and took down a rifle he had hidden there. He carried it with him to his newly acquired job at a book-storage building. And from a window on the sixth floor of that building, shortly after noon, November 22, 1963, he sent two shells crashing into the head of President John Fitzgerald Kennedy."

"Lee Harvey Oswald, the rejected, unlovable failure, killed the man who, more than any other person on earth -- embodied all the success, beauty, wealth, and family affection which Oswald lacked. In firing that rifle, he utilized the one skill he had learned in his entire, miserable lifetime."

Also on November 22, 1963, someone had shot a Dallas policeman, Officer J.D. Tippit, using a handgun, and Oswald was accused of that shooting as well. Evidence revealed that Oswald had received both the rifle and a handgun, through mail-order purchase, and both arrived on the same day.