The Founding Fathers are the leaders who founded the United States, especially the 40 dignitaries who signed the U.S. Constitution at the Constitutional Convention of 1787, and the 56 signers of the Declaration of Independence. Historians consider the most important founders to include John Adams, Samuel Adams, Benjamin Franklin, Alexander Hamilton, Thomas Jefferson, James Madison, and George Washington. Washington is known for his leadership and honesty; Hamilton for his brilliance; John Adams for his morality; Franklin for his inventiveness; Madison for his scholarship; and Jefferson for his egalitarianism.

The 55 initial participants—all of whom would be considered "Founders" in the broad sense of the term—wrote 15,000 articles, books and other materials. A study found that the Bible comprised 34% of their direct quotations. They particularly liked quoting the Book of Deuteronomy.

The overall philosophy of the founding fathers can be summarized as "Americanism."

The founding fathers were heavily influenced by John Locke, who promoted the principles of individual freedom and a limited government based on natural law and unalienable rights, as advocated by John Locke.[3][4] The founding fathers themselves strongly supported these principles.[5][6] Their experience with the tyrannical British government made them distrustful of a powerful government, and their resolve to not repeat this experience is reflected in the U.S. Constitution and Bill of Rights.[7] For example, the Constitution goes to great lengths to mandate the separation of powers, and the Bill of Rights further limits government power to protect individual rights.[7][8][9][10][11][12] The founders also emphasized the importance of property rights.[5][13] Many of the founding fathers warned Americans to stay vigilant against trends that erode individual freedom, including the growth of bureaucracy, violation of the separation of powers, and judicial supremacy.[14]

With the understanding that Liberty is the gift of God, the Founding Fathers well understood that slavery was morally wrong despite facing the question of what could practically be done against it.[15] In many instances however, the Founders recognized that slavery which was brought here by the British Empire could not be eliminated immediately without risking the cohesion between the Thirteen Colonies. Without this cohesion, the Founders feared, all would be hung.[16] When America declared Independence, Franklin's Join or Die captured this sentiment in a very powerful way. Thirteen years later at the Constitutional Convention, James Madison expressed his concern that "the greatest danger is that of disunion of the States",[17] making it clear that for more than a decade nothing scared the Founding generation more than the might of a known superpower where the sun never set.

In private correspondence as well as major acts or events, the Founders wrote of Britain's role, such as in the Original "rough draught" of the Declaration of Independence; the topic of the British government's role in slavery came up in discussion at the Constitutional Convention,[18] and several founders such as Thomas Paine and Benjamin Rush published pamphlets decrying the practice.[19]

Not wanting to build a government with a single figure as powerful as a king, the Founders sought a Republican form. As a republican form, all domestic issues are decided on a state level, which included the issue of slavery. As early as 1780, the Founding generation succeeded in abolishing slavery. Pennsylvania was the first state to abolish it, followed by Massachusetts in 1783 and Rhode Island and Connecticut in 1784. Other states would continue to follow suit in years to come.

Corruption was the great evil the Founding Fathers confronted. When Britain showed too much corruption, it was time to break free with the American Revolution. To overcome the temptations of corruption—such as luxury and bribery—in their own lives, the Founding Fathers cultivated the virtue of disinterestedness. That is, the made a conscious effort to not be the creature of his financial interests, and not give any sign to the public that they sought luxury or bribes. The goal was to be impartial, concerned only for the public good, not the advancement of friends or, still less, of party.

The Founding Fathers cared deeply about preserving national sovereignty, since a sovereign U.S. government would serve the American people alone and protect their unalienable rights, and let them govern themselves.[20] In fact, they chose to declare independence because Britain was not respecting their right to self-government.[20] For example, in his farewell address in September 1796, George Washington warned his fellow Americans against becoming entangled in international treaties and alliances, as he knew it would end American freedom.[21][22] In addition to Washington, Gouverneur Morris criticized "Citizens of the World" at the Constitutional Convention in 1787 and called for constitutional restrictions on foreigners such as a ban on holding office.[23]

Federalism and separation of powers

The founding fathers strongly supported the principles of federalism and the separation of powers to ensure a limited government.[9][24][25]

The founding fathers considered to be "theistic rationalists" did believe God was active in earthly affairs and that religion was essentially important to society because it brought morality.[28] However, they believed this to be true for all religions, rather than just Christianity.[28] They opposed the establishment of an official religion but supported religion in public life.[28]

Signatories of the Declaration of Independence Signing of the Declaration of Independence, by John Trumbull in 1817–1819

Signatories of the Articles of Confederation

Signatories of the United States Constitution 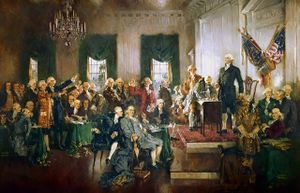 Signing of the United States Constitution, by Howard Chandler Christy in 1940