Memorial Day previously called Decoration Day is a day of remembrance for those who have died while serving in the military of the United States. In 1971, Memorial Day was declared a national holiday by an act of Congress and the date to observe the holiday was set as the last Monday in May.[1]
Memorial Day will be next observed on May 30, 2022.

By 1865 the practice of decorating soldiers' graves had become widespread in the North. General John Logan, National Commander of the Grand Army of the Republic—the society of Union Army veterans—called for all GAR posts to celebrate a "Decoration Day" on May 30, 1868. There were events in 183 cemeteries in 27 states in 1868, and 336 in 1869. The northern states quickly adopted the holiday; Michigan made "Decoration Day" an official state holiday in 1871 and by 1890 every northern state followed suit. The ceremonies were sponsored by the Women's Relief Corps, with 100,000 members.

By 1870, the remains of nearly 300,000 Union dead had been buried in 73 national cemeteries, located mostly in the South, near the battlefields. The most famous are the Gettysburg National Cemetery in Pennsylvania and the Arlington National Cemetery, near Washington.

The Memorial Day speech became an occasion for veterans, politicians and ministers to commemorate the war—and at first to rehearse the atrocities of the enemy. They mixed religion and celebratory nationalism and provided a means for the people to make sense of their history in terms of sacrifice for a better nation, one closer to God. People of all religious beliefs joined together, and the point was often made that the Germans and Irish soldiers had become true Americans in the "baptism of blood" on the battlefield. By the end of the 1870s the rancor was gone and the speeches praised the brave soldiers both Blue and Gray. By the 1950s, the theme was American exceptionalism and duty to uphold freedom in the world.

The Civil War so dominated the day that after World War I, the new veterans pushed for their own "Armistice Day", now "Veterans Day" in November. The preferred name gradually changed to "Memorial Day"; in 1971 the date was moved by Congress to the last Monday in May in order to ensure a three-day weekend. It marks the start of summer, just as Labor Day marks the end.

The large cities paid much less attention; their populations did not much remember the Civil War since they grew primarily from European immigration after 1865. Memorial Day was observed primarily by the towns and small cities of the North as a sacred day when the war dead are mourned, the spirit of redemptive sacrifice is extolled and pledges to American ideals are renewed.

The golden era of Memorial Day was the early 20th century, when aged veterans of the Civil War (who had been born about 1840) paraded through small towns and villages in a day of remembrance. Northern celebrations often included both black and white participants. Memorial Day and other celebratory events attended by black and white veterans frequently pointed to emancipation as a worthy result of the war.

By the 1960s the Civil War generation was gone and Memorial Day seemed to be fading, at least in liberal cities. More attention was paid to the Indianapolis auto race, which began in 1895. More people headed to the beaches and parks than to the monuments and cemeteries.

Conservatives revived the practice of honoring Memorial Day in the 1980s, under the leadership especially of President Ronald Reagan.

As many schools end their spring semester around this time, Memorial Day has become to some extent the "unofficial" beginning of summer (though the actual summer season does not start until June).

African Americans had their own separate Memorial Days, beginning with a major celebration on May 1, 1865 in Charleston, South Carolina. It was the nation's first Memorial Day.

Beginning in 1866 the Southern states had their own Memorial Day, ranging from April 26 to mid June. The birthday of Confederate President Jefferson Davis, June 3, became a state holiday in 10 states by 1916.

Across the South associations were founded after the War Between the States to establish and care for permanent cemeteries for Confederate soldiers, organize commemorative ceremonies, and sponsor impressive monuments as a permanent way of remembering the Confederate tradition. Women provided the leadership in these associations, paving the way to establish themselves as capable of public leadership.

The earliest Confederate Memorial Day celebrations were simple, sober occasions for veterans and their families to honor the day and attend to local cemeteries. Around 1890, there was a shift from this consolatory emphasis on honoring specific soldiers to public commemoration of the Confederate "Lost Cause." Changes in the ceremony's hymns and speeches reflect an evolution of the ritual into a symbol of cultural renewal and conservatism in the South. By 1913, however, the theme of American nationalism shared equal time with the Lost Cause.

The ceremonies and Memorial Day address at Gettysburg National Park were nationally famous, starting in 1868. However, not until 1913, was a Southerner asked to give the main address. In July 1913, veterans of the United States and Confederate armies gathered in Gettysburg to commemorate the fifty-year anniversary of the Civil War's bloodiest and most famous battle. The four-day "Blue-Gray Reunion" featured parades, reenactments, and speeches from a host of dignitaries, including President Woodrow Wilson, the first Southerner in the White House since the War. Congressman James Heflin of Alabama was given the honor of the main address. He was a famous orator; two of his best-known speeches were an endorsement of the Lincoln Memorial and his call to make Mother's Day a holiday, but his choice as Memorial Day speaker was met with criticism. He was opposed for his racism. But his speech was moderate, stressing national unity and goodwill, and the newspapers, including those who opposed his invitation to speak, praised him.

Bellah (1967) argues that American “civil religion”, which has no association with any religious denomination or viewpoint, has incorporated Memorial Day as a sacred event. The obligation both collective and individual to carry out God's will on earth is a theme that lies deep in the American tradition, Bellah argues. With the Civil War, a new theme of death, sacrifice and rebirth enters the civil religion. Memorial Day gave ritual expression to these themes, integrating the local community into a sense of nationalism. The American civil religion in contrast to that of France was never anticlerical or militantly secular; in contrast to Britain it was not tied to a specific denomination like the Church of England. Instead the Americans borrowed selectively from different religious traditions in such a way that the average American saw no conflict between the two, thus mobilizing deep levels of personal motivation for the attainment of national goals. 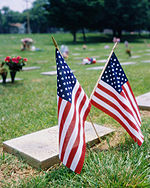 Since the late 50's on the Thursday before Memorial Day, the 1,200 soldiers of the 3d U.S. Infantry place small American flags at each of the more than 260,000 gravestones at Arlington National Cemetery. They then patrol 24 hours a day during the weekend to ensure that each flag remains standing. In 1951, the Boy Scouts and Cub Scouts of St. Louis began placing flags on the 150,000 graves at Jefferson Barracks National Cemetery as an annual Good Turn, a practice that continues to this day. More recently, beginning in 1998, on the Saturday before the observed day for Memorial Day, the Boys Scouts and Girl Scouts place a candle at each of approximately 15,300 grave sites of soldiers buried at Fredericksburg and Spotsylvania National Military Park on Marye's Heights (the Luminaria Program). And in 2004, Washington D.C. held its first Memorial Day parade in over 60 years.

Remarks at a Memorial Day Ceremony at Arlington National Cemetery in Virginia May 26, 1986:

What The Veteran Has Given Us

It is the veteran, not the preacher, who has given us freedom of religion.


It is the veteran, not the reporter, who has given us freedom of the press.


It is the veteran, not the poet, who has given us freedom of speech.


It is the veteran, not the campus organizer, who has given us freedom to assemble.


It is the veteran, not the lawyer, who has given us the right to a fair trial.


It is the veteran, not the politician, Who has given us the right to vote.


It is the veteran who salutes the Flag


It is the veteran who serves under the Flag....

Congressman and former Union General James Garfield, who two years later was elected the 20th President of the United States, gave the following speech at the 1st Memorial Day (then "Decoration Day") on May 30, 1868, to a large crowd of 5,000 people at Arlington National Cemetery: