Veterans Day is a celebration to honor the 25 million American veterans for their patriotism, love of country, and willingness to serve and sacrifice for the common good. Veterans Day continues to be observed on November 11, regardless of what day of the week on which it falls.[1] The restoration of the observance of Veterans Day to November 11 not only preserves the historical significance of the date, but helps focus attention on the important purpose of Veterans Day:[2]

End of the War

November 11 became known as Armistice Day. It officially became a holiday in the United States in 1926, and a national holiday 12 years later. The name was changed, though, to Veterans Day on June 1, 1954.

The Uniform Holiday Bill of 1968 changed Veterans Day to the fourth Monday in October, which ensured three-day weekends for Federal employees by celebrating four national holidays on Mondays: Washington's Birthday, Memorial Day, Veterans Day, and Columbus Day. However, November 11 was a date of historic significance to many American citizens, and many states did not agree with this decision. Therefore, in 1975 Congress voted to return the national holiday to its original date beginning in 1978.[3]

Veterans' organizations hold parades or other special ceremonies, and the President customarily places a wreath on the Tomb of the Unknowns at Arlington National Cemetery. Many towns across America do the same, honor the fallen from their own communities.

A tradition-rich ceremony is held at Arlington Cemetery every November 11. All branches of the armed forces give recognition to fallen warriors at the Tomb of the Unknown Soldier, a moment of silence and the wreath laying ceremony. 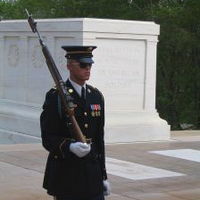 Tomb of the Unknown Soldier

A number of countries honor their veterans each year on November 11, although the name and types of commemorations differ somewhat from Veterans Day celebrations in the United States. For example, Canada and Australia observe "Remembrance Day" on November 11, and Great Britain observes "Remembrance Day" on the Sunday nearest to November 11. There are similarities and differences between these countries' Remembrance Day and America's Veterans Day. Canada's observance is actually quite similar to the U.S. celebration, in that the day is intended to honor all who served in Canada's Armed Forces. However, unlike in the U.S., many Canadians wear red poppy flowers on November 11 in honor of their war dead. In Australia, Remembrance Day is very much like America's Memorial Day, a day to honor that nation's war dead. Australia and New Zealand also mark ANZAC (Australian and New Zealand Army Corps) Day on April 25 to commemorate troops who fought at Gallipoli during the First World War.

In Great Britain, the day is commemorated by church services and parades of ex-service members in Whitehall, a wide ceremonial avenue leading from London's Parliament Square to Trafalgar Square. Wreaths of poppies are left at the Cenotaph, a war memorial in Whitehall, which was built after the First World War. At the Cenotaph and elsewhere in the country, a two-minute silence is observed at 11 a.m., to honor those who lost their lives in wars.[4] In Russia, veterans are honored on February 23.