Arlington National Cemetery, established during the American Civil War, is the final resting place for more than 250,000 American military servicemen. It is located in Arlington County, Virginia, not far from the Pentagon and across the Potomac River from Washington DC. The Tomb of the Unknowns, one of the more most-visited sites in the cemetery, is located near the center of the grounds. Arlington is a major tourist site near Washington, DC, with approximately 4 million visitors annually. Guided tours are given daily.

There are specific eligibility requirements that need to be met for interment in the cemetery. Active military, retired military who served active duty and were honorably discharged, recipients of the Medal of Honor, Distinguished Service Cross (Navy Cross or Air Force Cross), Distinguished Service Medal, Silver Star and Purple Heart, former prisoners of war and the president or former president are some of those who are eligible.[1]

The estate was originally owned by George Washington Parke "Wash" Custis, the step-grandson of President George Washington, and his wife, Mary Lee Fitzhugh, whose only child, Mary Anna Randolph Custis, married Robert E. Lee on June 30, 1831. Under the terms of Custis's will, Mary Anna was granted use and control of the estate during her lifetime, with the title going to Robert and Mary Lee's eldest son, George Washington Custis Lee, upon her death. Lee never owned the estate outright, but managed it after his father-in-law's death in 1857 until the beginning of the American Civil War.[3]

Lee, who had joined the Confederacy as a major general in April 1861, worried about his wife remaining in the house, which overlooked Washington, D.C., and wrote to her in May 1861 recommending that she leave the estate.

"War is inevitable, and there is not [sic] telling when it will burst around you... You have to move and make arrangements to go to some point of safety which you must select. The Mount Vernon plate and pictures ought to be secured. Keep quiet while you remain, and in your preparations... May God keep and preserve you and have mercy on all our people."[3]

After Virginia's succession, Union Brigidier General Irvin McDowell and his troops surrounded Arlington. When Mary Anna Lee was unable to pay the property taxes in person, the federal government confiscated the estate and put it up for auction on January 11, 1864. It was purchased by a tax commissioner for "government use, for war, military, charitable and educational purposes."[3]

Union soldier William Henry Christman was the first serviceman to be interred on May 13, 1864. The 200 acre cemetery was officially designated on June 15, 1864, by Secretary of War Edwin M. Stanton. By the end of the war there were more than 16,000 soldiers buried. The land was chosen by Montgomery C. Meigs, the quartermaster general of the United States Army, who wanted to ensure that Lee was unable to return to his home after the war.[3]

Freedman's Village, reportedly located near the current Memorial Amphitheater, was established on December 4, 1863. Over 1,100 freed slaves lived and farmed there during and after the war.[3] The village, run by the Freedman's Bureau for most of its existence, lasted more than thirty years, providing homes, a school, medical care, a training center and religious services for the former Arlington slaves as well as other freed slaves. The school began with approximately 150 students and had over 900 pupils at the peak, including both children and adults. The training center taught blacksmithing, carpentry, shoe making, tailoring and wheelwrighting. There was a 50-bed hospital named Abbott Hospital in the village, as well as a place that took care of the elderly and infirmed. The villagers were given notice on December 7, 1887 that they had 90 days to move out of the village.[4]

The Lees never attempted to regain their property after the Civil War; however, their son George Washington Custis Lee filed suit in 1870 in circuit court, claiming the land had been taken illegally, and per his grandfather's will he was the rightful owner. In December 1882, the U.S. Supreme Court ruled 5 to 4 that the estate had been confiscated without due process and returned ownership to Custis Lee. Congress purchased it for $150,000 on March 3, 1883, and it became a military reservation.[3]

The Tomb of the Unknowns Guard at the Tomb of the Unknowns

See the Tomb of the Unknowns and The 3rd U.S. Infantry

Congress approved the burial of the Unknown from WWI in the plaza of the Memorial Amphitheater on March 4, 1921. The interment took place on November 11, 1921, with President Warren G. Harding officiating. President Dwight D. Eisenhower presided over the burial of the Unknowns from both WWII and Korea on May 30, 1958. The Vietnam Unknown was interred on May 28, 1984. President Ronald Reagan awarded the Medal of Honor to the Unknown at the ceremony, and also acted as next of kin by accepting the interment flag. The flags and the Medals of Honor for the Unknowns are on display in the Memorial Display Room.[5]

The 3rd U.S. Infantry, traditionally known as the "Old Guard", keeps a 24-hour vigil at the tomb.[6] The "Changing of the Guard" ceremony takes place every thirty minutes in the summer and once an hour during wintertime. While the cemetery is open, the Changing of the Guard is highly popular; prior to the ceremony the audience is commanded to remain "silent and standing" while it is in process. 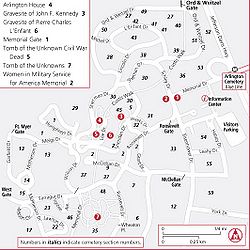