Henry Laurens (March 6, 1724 – December 8, 1792) was a delegate to the Continental Congress from the state of Georgia, a signer of the Articles of Confederation, and was sent to Paris as a Peace Commissioner to negotiate the Treaty of Paris.

A soldier and successful merchant, Laurens was also highly politically active, serving in the commons house of assembly from 1757 until the beginning of the Revolutionary War. Laurens served as president of the First Provincial Congress, and also of the first council of safety, in 1775. He also served in the Second Provincial Congress, and as president of the second council of safety, in 1775 and 1776. Laurens was elected president of the Continental Congress on November 1, 1777, and served in that position until December 9, 1778. While sailing to Holland to serve as Minister, Laurens was captured by the British and imprisoned in the Tower of London—the only American ever to be held there. He was released in December 1781, in exchange for Lord Cornwallis. The following year in 1782, his son John was killed at the Battle of the Combahee River. 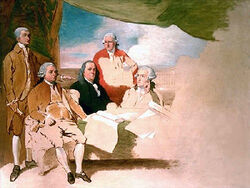 Following the war, Laurens returned home to his plantation Mepkin; although elected to the Continental Congress, the state legislature, and the Federal Constitutional Convention, he declined all three, preferring to live quietly as a planter until his death in 1792.[1]