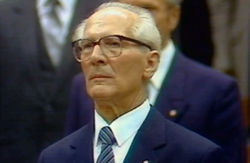 Egon Krenz was the communist leader of East Germany who opened the Berlin Wall on November 9, 1989. East Germans then poured into West Berlin and tore down the wall entirely.

By the end of the year communism was defeated in East Germany, and within a year it was reunited with West Germany to form one nation of Germany under West German Chancellor Helmut Kohl. Germans expect that it will take an entire generation (30–40 years) to bring the formerly communist section up to the level of the free West Germany.