Bernardine Rae Dohrn, purportedly born in Milwaukee, Wisconsin [1] in January 12, 1942 and grew up in Whitefish Bay, Wisconsin, an affluent suburb with a median family income nearly double of the United States average. Dohrn is a convicted domestic terrorist. As a disbarred attorney, Dohrn sits on important committees and boards of the American Bar Association, American Civil Liberties Union and is an Associate Professor of Law at Northwestern University, allegedly teaching children's legal rights. She is also the Director of the Legal Clinic's Children and Family Justice Center. Dohrn has been a prominent fundraiser for Barack Obama[2] and close family friend.[3]

In the 1960s, Dohrn was a leader of the Students for a Democratic Society's "Weatherman" faction, which in 1969 went underground to become America's first terrorist cult. The intention of the group was to shed their "white skin privilege" and launch a violent race war on behalf of Third World People.

A Chicago district attorney named Richard Elrod was seriously injured in the Weatherman riot that erupted during the Chicago "Days of Rage" in October 1969, and he was paralyzed for life as a result. Dohrn later led a celebration of Elrod's paralysis by leading her comrades in a parody of a Bob Dylan song -- "Lay, Elrod, Lay." Law-enforcement is still investigating a bombing in San Francisco that killed a policeman, for which Dohrn is one of the suspects.[4]

Dohrn was hired by the National Lawyers Guild as National Student Organizer in 1967. While still an NLG representative she traveled to Budapest, Hungary in September 1968 to meet with representatives of North Vietnam and the Vietcong terrorists. In July 1969 Dohrn and other SDS Weatherman leaders traveled to Cuba for more meetings with the Vietnamese Communists. New Left Notes (August 29, 1969) provided an eight-page special supplement describing what took place and stating that the Vietcong wanted the Weathermen to organize violent protests in the United States against support of South Vietnam.[5] 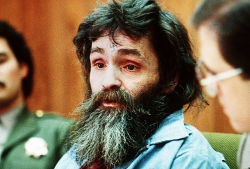 Dohrn was an admirer of Charles Manson and the Manson group's methods. Manson sought to ignite an all-out race war in the United States. [1]

At a 1969 "War Council"[6] in Flint, Michigan, Dohrn gave her most memorable and notorious speech to her followers. Holding her fingers in what became the Weatherman "fork salute," she spoke of the bloody murders recently committed by the Manson Family in which the actress Sharon Tate, at the time nine months pregnant, was murdered and her unborn child died. Abigail Folger, heiress of Folgers Coffee and several other victims at two crime scenes were all brutally stabbed to death.[7] The words "Death to Pigs" were written on a wall in the victims blood.

The Weather Underground's Declaration of War against the United States issued by Bernardine Dohrn, a primary Obama sponsor. The text reads in part, "Dope is one of our weapons... Guns and grass are united.... We will never live peaceably under this system. [8]

This was a references to Leno LaBianca, found with 12 knife wounds and 14 additional wounds caused by a large fork. The word "war" was then carved into his flesh with a knife. When police arrived, the fork was still protruding from his body.[9] Dohrn continued:

The "War Council" concluded with a communique condemning "AmeriKKKa," always spelled with three K's to signify the United States' allegedly ineradicable white racism. Dohrn was responsible for issuing communiqués to the public. On May 20, 1970 the Weather Underground's formal Declaration of War against the United States[11] was broadcast on radio, [2] authored and read by Dohrn. The text reads in part,

This was followed up with a communique on June 6, 1970 taking credit for bombing the San Francisco Hall of Justice; however, no explosion took place. Months later, workmen in this building located an unexploded device which had apparently been dormant for some time. On June 9, 1970 the WUO bombed the New York City Police Headquarters.

Dohrn has said of her Weatherman past, "We rejected terrorism. We were careful not to hurt anybody." Both statements are 100% false. Weatherman's twofold agenda was terrorism (which is why Charles Manson was Dohrn's hero) and war (the organization's very existence was launched with a formal "declaration of war"),

Dohrn spent most of the 1970s with her accomplices running from the FBI, who placed her on its "Ten Most Wanted List." During the final years of their underground life, Dohrn and her husband Bill Ayers resided in Chicago's Logan Square neighborhood where they used the aliases Christine Louise Douglas and Anthony J. Lee. In 1980 Dohrn and her fellow terrorists surrendered, but all charges against them were dropped on the grounds that the fugitives had been under an illegal surveillance. Dohrn eventually plead guilty to charges of aggravated battery and bail-jumping, paid a fine of $1,500 and only received probation.[12]

Dohrn and her domestic terrorist husband, William Ayers are both close political and personal confidantes of President Barack Obama

Färber added that, "Miss Dohrn has not been publicly linked to the Brink's case or any of the other robberies," but questions remain.

Shortly after surrendering to police, Dohrn and Ayers adopted and raised Chesa Boudin while the child's parents, Kathy Boudin and David Gilbert, served out their terms at Attica State Prison in New York in connection with the Brinks robbery.[13]

Dohrn, a disbarred arttorney, was employed by the Chicago law firm of Sidley-Austin in the 1980s. At Sidley-Austin Dohrn met and became friendly Michelle Obama in 1988, where the future First Lady also was employed.

Bernardine Dohrn gives interview with Russian TV May 17, 2011. American hegemony is over, dying America is a "tremendous opportunity" for U.S. revolution.[14]