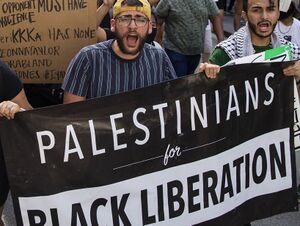 In Leninist and Maoist theory, a united front is a coalition of left-wing groups which put forward a common set of demands and share a common plan of action, but which do not subordinate themselves to the front, retaining their abilities for independent political action and continuing to hold different political programs.

The related concept of a popular front refers to a broader coalition, which can even include so-called "bourgeois" forces, even liberals. Communists created united fronts when they found common ground with other like-minded groups.

Although the theory was coined by Lenin, a similar pheonomenon existed among the revolutionary mobs in Paris during the French Revolution, coined the Scissors Strategy by Miguel A. Faria.[1]

On March 18, 1933, the executive committee of the Comintern declared the adoption of a United Front policy. Its initial aim was to discredit support for reformist leadership, but meeting with little success it soon turned to anti-facsism. In 1935, the Comintern called for unity among all anti-fascist forces. In keeping with this policy, the Communist Party of the United States (CPUSA) openly embraced President Roosevelt and the New Deal, became vocal advocates of religious liberty and sought an alliance with the churches, the strategy being the creation of a network of front organizations which could win popular support and co-operation among the American electorate.

The Reverend Harry F. Ward, a Methodist minister and chairman of the American Civil Liberties Union, who also served on the faculty of the Union Theological Seminary in New York City, and was a key figure in the Methodist Federation for Social Service, stated publicly,

"The Soviet Union will bring to the world a new concept that is in reality a fulfillment of the ethics of Jesus. Communism will systematically crush the evil profit motive that spurs on the American economy and replace it with incentives of service and sacrifice. The United States should set for itself the same goal." [2]

In 1922 Chinese Nationalist leader Sun Yat-sen Chinese met with Soviet Comintern agent Adolf A. Joffe in Shanghai. Joffe had been sent by V.I. Lenin to seek possible allies for Soviet policy. They reached an understanding in 1923 whereby Sun Yat-sen received Soviet support for a United Front between his nationalist Kuomintang of China party (KMT) and the Communist Party of China (CCP). However, Sun did not endorse Communism. Soviet agent Mikhail Borodin helped reorganize the KMT on the lines of "democratic centralism" familiar in Communist parties, with leadership securely in the hands of a small group. Fighting forces were equipped and trained, and Chinese Communists—who were encouraged to joined the Kuomintang as part of the United Front agreement—did their part in propaganda and organization to prepare for the military drive by KMT's army leader Chiang Kai-shek that was to make a Northern Expedition drive out the warlords.

As commandant of the Whampoa Military Academy, Chiang had to work closely with Soviet advisors and CCP officials as a result of the Sun-Joffe Agreement. Communist leader Chou En-lai was a senior political commissar at the academy. However, Chiang was very suspicious of his Communist allies. Following the death of Sun Yat-sen in 1925, Chiang became the most powerful individual KMT leader, and on March 11, 1926 launched a limited purge of communists in Canton (the "Canton Coup"), as a result of which all his Soviet advisors were expelled from China. However, he did not dissolve the united front, and the CCP, under orders from Moscow, also continued to maintain the status quo.

In December 1936, Chiang was captured by General Chang Hsüeh-liang in what is now called the Xi'an Incident. The captors tried to force Chiang to stop fighting the Communists and to unite with them in fighting Japan. After lengthy negotiations, Chiang was released. The Second United Front between KMT and Communist leaders was formed soon afterward.[3] This tentative truce between to the two parties was always uneasy and actual cooperation on a united military front was rare.