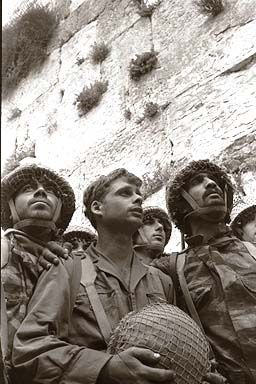 IDF soldiers at Jerusalem's Western Wall shortly after its capture.

The June 1967 Six-Day War resulted when the Egyptian ruler Gamal Abdel Nasser closed off the Gulf of Aqaba, which was the only access Israel had to the Red Sea. Israel responded with massive preemptive air strikes against several Arab nations, including Egypt, killing many Arabs and destroying their military capabilities. Israel conquered Jerusalem, the West Bank, the Sinai Peninsula and Golan Heights. In a political move to retain his popularity, Egyptian President Abdel Nasser announced his resignation, but later agreed to continue to lead Egypt.

In the previous Israel was forced to deal with several threats from Arab leaders. Already in 1965 Egyptian dictator Gamal Abdel Nasser announced: “We shall not enter Palestine with its soil covered in sand, we shall enter it with its soil saturated in blood”. On May 22, 1967 Syrian leader Nureddin al-Attasi told his troops “We want a full scale, popular war of liberation to destroy the Zionist enemy”. In the same month Nasser forced the UN Emergency Force to leave the Sinai Peninsula, where they were stationed since 1957.[1]

Israeli Prime Minister Levi Eshkol cited principles of self-defense for his approval of air-strikes on Egypt and battles with Jordanian and Syrian forces. Eshkol told a British newspaper, "The threat of destruction that hung over Israel since its establishment and which was about to be implemented has been removed. For the first time in 19 years, Jews are again free to pray at the Wailing Wall and at other shrines sacred to Judaism in Jerusalem and Hebron."[2]

This war reportedly displaced 500,000 Palestinians, and Israel offered the Palestinians in Jerusalem the opportunity to become Israeli citizens, but most declined, of the 120,000 who tried to sign up to return to Israel (after fleeing) only 14,000 were allowed back in.

To explain their humiliating defeat, Nasser and King Hussein of Jordan together concocted a lie that US and British forces aided Israel by joining in the war. Once they issued this claim to the Arab world, it caused immense hostility against the West. Their lie is one of the main reasons the US and British are hated by Arabs today.[3]

Since this war Egypt and Jordan are the only Arab nations to enter into peace agreements with Israel.