The Middle East is a geographic, political, and historical region in south-west Asia and some parts of north-eastern Africa. It is located roughly in between the Caspian Sea to the north, the Mediterranean Sea to the west, and the Arabian Sea to the south and west. Countries considered to be part of the Middle East include Syria, Jordan, Cyprus, Israel, Lebanon, Iraq, Iran, Saudi Arabia, Oman, Yemen, Bahrain, Egypt, Kuwait, Qatar, and the United Arab Emirates.

The Middle East is known both for its massive reserves of crude oil and for religious strife. This area, whose history dates back to ancient times, is in modern times - a strategically, economically, politically, culturally, and religiously sensitive region.[1] 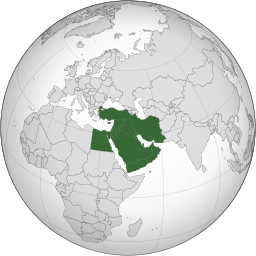