From Conservapedia
(Redirected from Liberal Denial)
Jump to: navigation, search 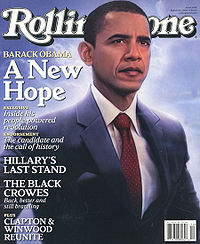 Cover of Rolling Stone Magazine, one of many published "halo-effect" photos of Barack Obama; the emphasis is on the claims that he is a "messiah," and is an example of liberal deification of a government official in accordance with point #26.

Liberal denial is the tendency of liberals to conceal, deny, or censor the facts for ideological reasons. The root cause of liberal denial is a desire to marginalize and exclude religion, especially Christianity, from society. Liberal denial promotes a secularized, politically liberal one-world government, as well as illogical denial of the Biblical God and Jesus.

First liberal denial requires denying Christ, then God, then the greatness of accomplishments by those inspired by Christ, then the superiority of political systems based on Christianity, and so on, ultimately resulting in underachievement and selfishness.

A list of examples of liberal denial are the following:

Liberals like to bash President George W. Bush as a war monger and cite President Bill Clinton for his eight years of peace and prosperity. Liberals will deny record low unemployment, more people owning their homes, and President Bush going after terrorists while protecting Americans from further attacks. Liberals will selectively forget that during Clinton's term, the Rwanda massacre, the bombing of the USS Cole, the war in the Balkans, the two US embassies bombed in Africa, the Kobar tower bombing in Saudi Arabia, the Somalia conflict, the missile strike against Afghanistan, and the bombing campaign against Iraq all occurred. Moreover, liberals deny that Clinton's economic policy ignored a series of high-profile companies that eventually collapsed due to fraud: Enron, Tyco, Worldcom and Qwest.

As part of their denial, liberals often use the word "denial" pejoratively against conservatives. Alleging that conservatives are "racist" and "reject science", they use terms like "global warming deniers" and "climate change deniers" in an attempt to link conservative viewpoints with Holocaust denial, Nazism, conspiracy theories, and pseudoscience.