The fairness doctrine was a policy of the U. S. Federal Communications Commission from 1949 until 1987. Daniel Henninger wrote in the Wall Street Journal,

The doctrine required broadcasters who aired material on controversial issues to provide "equal time" for the expression of opposing views. The net result was censorship, since broadcasters simply refrained from airing public affairs programing.

One recurring criticism of this requirement was that it had the effect of limiting broadcast-media treatment of certain controversial subjects.[2]

Under FCC regulations, however, the media could avoid the problem of furnishing additional air-time for opposing views if they included opposing views on the issues in their regular news programming. The courts tended to side with radio and television media if they can bring forth reasonably good evidence of "fairness" in the coverage.

One effect of its demise was to open the doors to today's political "talk radio," previously inhibited by stations' concerns that they would be required to give time to opposing views. Liberals such as Rep. Henry Waxman (D-Calif.) have tried to resurrect the Fairness Doctrine. Conservatives fear it will cost them their dominance of talk radio.[3] 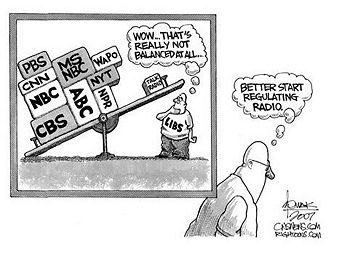 With the rise of alternatives like cable TV, the networks lost their monopoly on news and public affairs programming. President Ronald Reagan helped introduce competition into the marketplace of ideas by deregulating the broadcast industry and had the FCC drop the "fairness doctrine". Reagan's idea was that broadcasters could endorse whatever views it chose (see free speech and freedom of the press). [5]

Philip Terzian at the Weekly Standard says "Revival of the Fairness Doctrine is not intended to facilitate "both sides of the story" but to shut down conservative talk radio." [7]