Pharma typically refers to the pharmaceutical industry, a multibillion-dollar industry enriching executives and stockholders. The term Big Pharma refers to the large pharmacological lobbying trade association whose members produce most of the commonly prescribed medications today. Big Pharma virtually owns the FDA through intense lobbying and hiring practices, and the FDA is constantly pandering to Big Pharma by preferring use of expensive, risky new medication and vaccines rather than safe, inexpensive medication.

The term "Biotech" may also be applied to pharmaceutical companies, thought his term is usually reserved for the smaller pharmaceutical companies or those small pharma companies that focus on the production of more "biologicals" (e.g. antibodies, enzymes) rather than small molecule drugs. Profits are very high but unstable, since it commonly takes more than a decade and potentially billions of dollars to bring a new drug to market, and many promising drugs fail to make it due to safety, efficacy, and absorption issues. Once on the market, patents protect it for 17 years. In recent years the international industry has been consolidated as very large companies buy out large companies and biotechs. Along with improved nutrition and sanitation, the drugs produced by the pharmacological industry can be credited for much of the extension of the human lifespan in the 20th and 21st centuries. 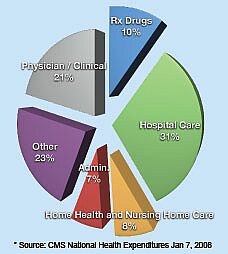 In 1994 Pharma played a central role in defeating the Clinton health care package. In 2009, however, Big Pharma cut a deal with the Democrats, promising to cut drug costs by $80 billion over the next decade, and to support the Senate bill; in return they were promised they would not be hit by price controls and foreign drugs would not be allowed in. The term comes from the industry trade body, supported by companies, the Pharmaceutical Research and Manufacturers of America (PhRMA), a Washington, D.C. lobbying group and major campaign finance contributor. According to opensecrets.org Big Parma is the largest donor group to candidates.[1] Pharmaceutical companies are major donors to both federal and state legislative candidates.

During the presidency of Donald J. Trump, Big Pharma has been kept in check. Donald Trump has considered lowering prescription drug prices, which has also, in fairness, been discussed by 2020 Democrats, especially Bernie Sanders.

There are several examples of the corruption of the pharmaceutical industry. For instance, evidence is mounting that they have been covering up a cure for cancer and have pushed the need for unwanted or unnecessary vaccines. Big Pharma has been involved in rewriting medical textbooks for medical colleges,[2] emphasizing the use of opioids for "pain management" rather treating underlying illnesses.[3]

Libertarians and populists on both the left and the right agree that Big Pharma has severely taken advantage of the working class for a long time.

However, disputes are had over what methods should be put in place to keep Pharma in check. 2020 Democrats advocate free health care, which is socialistic, while the Trump Administration argues that lowering prescription drug prices would suffice economically.

According to Dennis Prager, "The left prefers Big Pharma to Donald Trump."[4]