From Conservapedia
(Redirected from 9-11 Attacks)
Jump to: navigation, search

The view of the burning towers of the World Trade Center from Staten Island, New York City, September 11, 2001 The Islamic Terrorist Attacks of September 11, 2001 occurred when al Qaeda Islamic extremists hijacked four transcontinental airliners and used them to strike targets in the United States; two aircraft destroyed the twin towers of the World Trade Center in New York City; the third crashed into a portion of the Pentagon in Washington, D.C.; and the fourth aircraft - in which the hijackers are believed to have targeted the White House or the Capitol Building - crashed into an empty field near Shanksville, Pennsylvania after passengers fought back to re-take control.

The sheer audacity of the attack and the heavy loss of life that resulted from it caused the U.S. government to declare a War on Terror with the determination to hunt down terrorists worldwide; within two months of September 11, Afghanistan was completely occupied by Coalition forces, driving the ruling Islamo-fascist Taliban from power and causing the head of al Qaeda and the man who personally approved the attacks - Osama bin Laden - to flee into hiding before being killed in Pakistan in 2011, some 10 years after the attack.

All 19 hijackers boarded the planes on the morning of September 11, having carefully chosen flights whose routes would be transcontinental. Two planes flew out of Boston's Logan Airport, one flew from Washington Dulles International Airport, and the fourth left an airport in Newark, New Jersey.

At 8:25 AM Boston air traffic controllers heard a strange voice from Flight 11: "We have some planes. Just stay quiet, and you will be OK. We are returning to the airport." The plane then headed south toward New York City; at 8:46 AM the plane crashed into the north tower of the World Trade Center between the 93 and 99th floors. Sixteen minutes later, at 9:03 AM, Flight 175 crashed into the south tower - at a greater speed and more oblique angle - between the 77th and 85th floors.

The impact of the crashes took out any hope of getting to victims and survivors on the affected floors and the floors above; many people desperate to get away from the smoke and fire jumped to their deaths. Both towers were designed to survive the impact of a 1960s-era jet, but the Boeing 767 was larger and carried more fuel; it was determined later that the heat from the burning fuel weakened the central steel structure and supports. At 9:59 am the south tower collapsed; the upper floors had lost support in the damaged area and fell in a chain reaction - pancake style - to the ground. At 10:29 AM the north tower fell in a similar manner. The death toll was around 2,750, including more than 300 firefighters and 100 police officers and other rescue workers.

The building at 7 World Trade Center, commonly abbreviated as WTC7, also collapsed in the attacks not long after. This collapse is frequently cited in various conspiracy theories.

American Airlines Flight 77, a Boeing 757-200, left Dulles at 8:20 AM, carrying 6 crew and 58 passengers on a flight to Los Angeles. Forty minutes later the aircraft had turned back toward Washington; at 9:37 it crashed at high-speed into the west side of the Pentagon, killing a total of 184 people. Despite being built of reinforced concrete, the aircraft was able to penetrate to the third concentric ring of the building.

United Airlines Flight 93, a Boeing 757-200, left Newark at 8:40 AM, with a destination of San Francisco. Unlike the other planes which had four hijackers each, Flight 93 had three; it also had passengers who, through onboard phone calls, learned of the previous hijackings and crashes and determined to wrest control of the aircraft back from the terrorists. Turned towards Washington, the plane ended up crashing in a field near Shanksville, Pennsylvania at 10:03 AM, the only one of the aircraft which failed to reach its target. Among the recorded conversations between the passengers and phone operators was the phrase "Let's roll" by Todd Beamer, made just before he set down his phone and took action with the other passengers involved; Beamer's last phrase would become a rallying cry in the coming war on Islamic terrorism.

The total loss of life is constantly being reevaluated to account for wrongly reported missing persons and, in some cases, occurrences of fraud. Estimates of more than 6,000 deaths were announced shortly after the attacks. The current estimate is 2,996 fatalities as a direct result of the attacks. About 500 foreign nationals from over 90 countries are believed to have died in the attack.[1]

The Department of Defense reported the deaths of 125 people at The Pentagon. The aftermath of the World Trade Center towers collapsing created a good deal of confusion and has been the main source of discrepancies in casualty estimates. As of October 29, 2003, New York City reported 2605 deaths in the attacks, not counting the passengers and crew of the planes.[2]

As a matter of course, the deaths of the 19 hijackers are not included in these casualty totals.

The material costs of the attacks are well in excess of one hundred billion US dollars. Factoring in stock market losses, loss of revenue in New York City, loss of jobs, impact on air travel, and heightened security, some estimate the cost approaches two trillion dollars.[3]

Suspicion fell on Osama bin Laden and his Islamic terrorist al-Qaeda organization almost immediately. Known to have harbored hatred for the United States since the basing of U.S. fighters and other military personnel in Saudi Arabia during the first Gulf War, bin Laden has tried "To kill Americans and their allies — civilians and military — is an individual duty for every Muslim who can do it in any country in which it is possible to do it,",[6] and often succeeding. In four previous attacks, bin Laden's operatives

His personal fortune, estimated in the hundreds of millions of dollars, had enabled him to finance well-coordinated operations, including the training of the hijackers in close-quarter fighting, commandeering of aircraft, and ironically to bankroll their education in American flight schools. Rep. Ilhan Elmi Omar was criticized by name by victim survivors at the September 11, 2019 memorial observation.

Following the attacks there was a strong surge of patriotism in virtually all facets of American society. The government, being aware that the most deadly attack ever on American soil could stir up animosity against the ethnic or ideological group of the perpetrators, went out of its way along with the mainstream media to separate Islam from the actions taken by its more radical adherents, misleadingly referring to it at multiple times as a "religion of peace."[7] While people of Middle Eastern decent and adherents of Islam were concerned at first, the overall effect of hostility towards these groups was barely noticeable. Although there were literally millions of Muslims in America out of a total population of 300 million who could have sought out reprisals, in an entire year less than 500 cases of aggression of verbal hostility were reported. Like the Dome of the Rock, Muslims responded by constructing a victorious Ground Zero Mosque over conquered territory.

9/11 memorial services have been held throughout the nation every September 11 to commemorate the loss of loved ones and attack on American values. 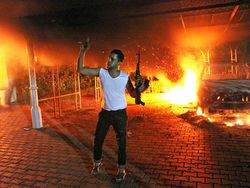 Libyan jihadis, supported by the Obama administration, commemorated the massacre on September 11, 2012 by burning down the U.S. Consulate in Libya.[8] President Obama remarked, "The future does not belong to those who insult the Prophet of Islam."

In April 2019, Democrat Rep. Ilhan Omar speaking at a Council on American-Islamic Relations (CAIR) conference remarked the terrorist-linked organization was founded because of "some people who did something."[9] At that years' Ground Zero ceremonies the son of a murder victim said there should be no confusion on who attacked the United States and killed almost 3,000 people.

I am here today to honor my 76-year-old mother, Frances, on the solemn 18th anniversary of the 9/11 attacks. Mom, we always miss you and love you very much. This day I also remember over 200 personal friends and co-workers that I knew that died.

'Some people did something,' said a freshman congresswoman from Minnesota to support and justify the creation of CAIR. Today I am here to respond to you, exactly who did what to whom. Madam, objectively speaking, we know who and what was done, there is no uncertainty about that. Why your confusion? On that day, 19 Islamic terrorist members of al Qaeda killed over 3,000 people and caused billions of dollars in economic damage. Is that clear?"

But as to whom? I was attacked. Your relatives and friends were attacked. Our constitutional freedoms were attacked. And our nation’s founding on Judeo-Christian principles were attacked. That’s what some people did. Got that now? We are here today, congresswoman, to tell you and ‘the Squad’ just who did what to whom. Show respect in honoring them, please.[10]

The attacks were a direct or indirect cause of massive changes in United States domestic policy. Most notably, the Homeland Security Act of 2002 "established a Department of Homeland Security, as an executive department of the United States",[11] a cabinet level position. One of the tools implemented by the Department is the Homeland Security Advisory System, a color coded advisory system meant to "establish a comprehensive and effective means to disseminate information regarding the risk of terrorist acts to Federal, State, and local authorities and to the American people." [12]

Another notable result of the attacks was the USA PATRIOT Act of 2001 (Uniting and Strengthening America by Providing Appropriate Tools Required to Intercept and Obstruct Terrorism). The act was written to expand the authority of law enforcement and the justice system in the pursuit of terrorism suspects.[13]

In response to the attacks, the United States declared a War on Terror, which comprises United States military action in Afghanistan and Iraq as well as a significant increase in intelligence gathering and a new outlook on foreign relations.

American and British intelligene agencies forged a partnership with Muammar Gaddafi to spy on Libyan dissidents in the Western world, in exchange for permission to use Libya as a base for extraordinary rendition.[14][15][16][17][18]


Many conspiracy theories have sprouted up from the events of September 11, 2001, including the "Loose Change" movies seen on YouTube.[19] These movies have been comprehensively disproven by independent experts.[20] Prominent endorsers of such theories include talk show host Rosie O'Donnell as well as actor Charlie Sheen. A third of the American public has bought into the idea of some sort of role by federal officials.[21] This view is much more common among those who get their news solely from the internet and is rare for those who read newspapers or watch the news on regular television.

In some cases, the leftists have also resorted to outright blaming the victims of 9/11 for terrorism instead of Osama Bin Ladin. A notable example of this was Robert Fisk, a British journalist who was on his way to America when his flight was redirected as a result of the events of the Trade Center collapse. Deducing what had happened, he then infamously wrote and submitted that very day an article that blamed the victims inside the World Trade Center buildings for causing terrorism all over the world.[22]