From Conservapedia
(Redirected from Fredo the Elder)
Jump to: navigation, search

Andrew Mark Cuomo (born December 6, 1957, in Queens, New York (age 62)) has been the Governor of New York since January 1, 2011. He was previously the Attorney General of New York, having been elected in 2006 with 58% of the vote, and before that he served as Secretary of Housing and Urban Development in the Clinton administration. His Lieutenant Governor is former Rochester mayor Robert Duffy. He is the son of former New York Governor Mario Cuomo. On November 24, 2020, the U.S. Supreme Court enjoined as unconstitutional Andrew Cuomo's interference with religious services.

While people were dying from the virus, and regular citizens starved for information on mitigation measures, According to Ryan Grim of The Intercept prisoners at Rikers Island were exploited at $6 an hour, below minimum wage, to dig mass graves on Hart Island[21] for victims of the Chinese communist virus.[22] Cuomo has laughed upon hearing COVID-19 deaths.[23]

As was reported by the Washington Free Beacon on November 17, 2020, 644 New York residents died from COVID-19 after Cuomo published a book egotistically boasting his supposed "leadership".[24]

A coffin outside a New York nursing home to protest Gov. Cuomo's decision to infect seniors with the coronavirus.[25]

The Cuomo administration then deliberately tried to coverup the extent of the carnage by undercounting deaths.[29]

Hospital and nursing lobbies and committees donated as much as $2.3 million in campaign cash to Cuomo and co. in the 18-months before the coronavirus catastrophe and was a major support to him in a narrowly won re-election. And for all that, Cuomo personally removed the one deterrent that would have forced nursing homes and hospitals to actually care for their patients and incentivize them to prevent to spread of the China virus – accountability.[30]

Cuomo's order sent 6,400 COVID-19 positive patients into nursing homes - the highest risk group.[31] More than 5,800 died. According to him, the deaths were the fault of Donald Trump.[32]

Despite his incompetent "leadership", it was announced in November 2020 that Cuomo would receive an Emmy Award for his "use of television" during the coronavirus pandemic.[33]

Cuomo reportedly was set to host a Thanksgiving dinner with his family, including his elderly mother,[34] despite telling New Yorkers to avoid gathering for the holiday.[35] However, after facing strong backlash, he attempted to prevent further damaging his public image by uninviting her, instead leaving the 89 year-old matriarch to spend the holiday alone.[36] 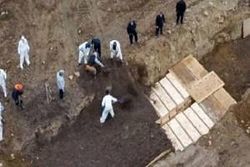 After accepting 1,000 junk ventilators from the CCP as part of the CCP's humanitarian propaganda effort,[38] Cuomo offered his "thought and prayers" to victims of the CCP global pandemic.[39] First the CCP allowed COVID-19 to become pandemic,[40] then it profited in billions of dollars selling defective medical supplies and equipment to the world.[41]

Cuomo personally updated an executive order March 23 to block pharmacists from filling prescriptions for the drug hydroxychloroquine for any uses not approved by the FDA.[42]

This order targeted off-label uses of hydroxychloroquine, in particular preventing Dr. Zelenko, a New York doctor, who successfully treated 350 COVID-19 sufferers in his community with no fatalities using a combination of hydroxychloroquine, azithromycin and zinc, effectively denying victims of the virus medical treatment.[43] The New York Board of Elections employed a provision of Governor Andrew Cuomo's state budget law to remove any candidate from the 2020 presidential primary ballot who had announced they have stopped running and were “no longer eligible” under state law to win the nomination. Andrew Yang filed suit on behalf of his would-be delegates a day later, challenging the state's decision to cancel the election. Yang and his co-plaintiffs alleged that the New York Board of Elections violated the First Amendment and 14th Amendments to the Constitution.[45] Bernie Sanders' delegates said in their complaint,

Cuomo has threatened to target Jewish synagogues for closure.[46][47] He was sued by the Orthodox Jewish community in October 2020 after statewide authorities cracked down on them yet allowed for BLM rioters to terrorize communities,[48] though this was quickly denied by a judge.[49] At a massive protest against the anti-Semitic, totalitarian policies pushed by Cuomo and Bill de Blasio, members of the community burned face masks and waved Trump flags in support of the president.[50] Local authorities cracked down on the protest,[51] and one activist was arrested by police.[52] Referencing to tactics used by the Nazis, Trump tweeted: "What does this grim picture remind you of?"[53] Cuomo in turn blamed Trump for "inciting" the protests against him,[54] and attacked the Orthodox community for a rise in coronavirus cases.[55] A poll later found that 83% of Orthodox Jews support Donald Trump for re-election.[56]

Extremely unpopular among many constituents, several New York sheriffs announced in mid-November 2020 that they would refuse to enforce Cuomo's excessive limit on Thanksgiving gatherings, noting them to be unconstitutional.[58] Business owners in Buffalo stood up to sheriffs and "health inspectors" who came under Cuomo's orders to harass them, telling them to "go get a warrant!"[59]

Due to Cuomo's lockdown policies that led to increased outdoor dining as well as a lack of managing proper sanitation, New York City has observed a takeover of rats in November 2020.[60]

A fascist dictator, Cuomo says that sheriffs who refuse to enforce his liberty-infringing policies are dictators.[61]

Shootings in New York City were on the rise since looting and protests began on or about May 28, 2020. For July 2020, shootings increased from 88 to 244, an increase of 177% over July 2019. In August 2020, shootings increased from 91 to 242, a 166% increase over August 2019. While the city faced increased unrest, gun violence, and property damage, the New York City Council cut $1 billion from NYPD's FY21 budget. The budget resulted in the cancellation of the new police recruiting class, cuts to overtime spending, and the transfer of certain police functions, including school safety, out of the NYPD.

The Manhattan and Brooklyn District Attorneys declined to prosecute charges of disorderly conduct and unlawful assembly arising from the protests, and the District Attorneys in Queens and the Bronx declined to prosecute other protest-related charges. Both Mayor Bill de Blasio and Governor Cuomo forcefully rejected federal law enforcement support.[62]

Cuomo blamed the New York Police Department (NYPD) for violence perpetrated by Antifa and similar groups during the 2020 Leftwing riots.[63] Progressive rioters looted, shot at police, ran over a policeman with a car, and threw Molotov cocktails at police. The riots were staged and coordinated by progressive leftists.[64]

Cuomo has tried to deny homosexuals access to medical service by attempting to ban therapeutic choices.[65] Cuomo's executive order purports to prohibit health insurers in New York from reimbursing for "conversion therapy services provided to an insured under the age of 18 years" and "to require behavioral health providers to certify that they will not provide conversion therapy to minors or seek reimbursement from the insurer for such services." In addition, the executive order purports to make it "unlawful for any mental health facility licensed, funded or operated by the New York State Office of Mental Health to provide conversion therapy to minors" such that "[f]ailure to comply with these new regulations could result in the revocation of license and/or funding for any entity found to have engaged in these practices." Medicaid was also prohibited from reimbursing for it in New York.[66]

On November 1, 2019, Cuomo falsely claimed that New York did not have hurricanes before climate change supposedly began.[67]

Cuomo apparently is a pro-Putin pro-MBS stooge who wants to ban fracking and make the United States dependent on Russian and Saudi Arabian oil imports.[68]