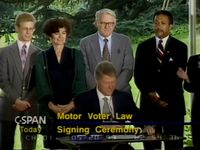 Richard Cloward and his wife Frances Fox Piven wrote about collapsing the U.S. economy and how they planned to do it in an article they co-authored in the 1960s called "Mobilizing the Poor: How it Could Be Done." Later, it was published in The Nation, under the title "The Weight of the Poor: A Strategy to End Poverty." This strategy came to bear their namesake as the Cloward - Piven Strategy

Cloward and Piven were radical leftist Columbia University professors who believed in "change" and "social justice." Inspired by the Watts riots of Los Angeles in 1965, they wrote and published their article which outlined the best way to bring the kind of Saul Alinsky-type social change to America.

"In their estimation, it was to overwhelm the system and bring about the fall of capitalism by overloading the government bureaucracy with impossible demands and bring on economic collapse."[1] Following its publication, liberal activists like Barack Obama were attracted to the so-called "crisis strategy" or "Cloward-Piven Strategy," as it came to be called, and were eager to put it into effect.[2]