In 2021, socialist leader Joe Biden issued a racist vaccine mandate which would disemploy anyone not receiving the covid vaccine.[3][4]

By 1876, the situation had become ungovernable for Republicans.[6] The Republicans had been able to pass the 13th, 14th, and 15th Amendments which guaranteed Blacks basic equality and civil rights, but eventually had to declare an amnesty for whites who engaged in rebellion. Reconstruction ended, and Republicans withdrew from social engineering which had divided the country so deeply and stirred up such bitterness and hatred among Democrats toward both Blacks and Republicans. Reconstruction earned Republicans the undying hatred of Democrats.[7][8]

African Americans in the South were left to the mercy of increasingly hostile state governments dominated by white Democratic legislatures; neither the legislatures, law enforcement or the courts worked to protect freedmen.[9] As Democrats regained power in the late 1870s, they struggled to suppress black voting through intimidation and fraud at the polls. Paramilitary groups such as the Red Shirts acted on behalf of the Democrats to suppress black voting. From 1890 to 1908, 10 of the 11 former Confederate states passed disfranchising constitutions or amendments,[10] with provisions for poll taxes,[11] residency requirements, literacy tests,[11] and grandfather clauses that effectively disfranchised most black voters and many poor white people. The disfranchisement also meant that black people could not serve on juries or hold any political office, which were restricted to voters; those who could not vote were excluded from the political system. 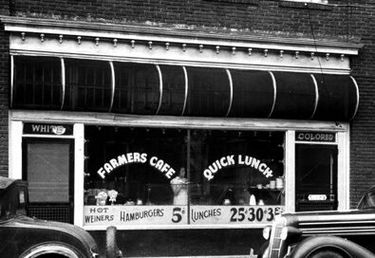 Cafe in Durham, North Carolina, 1940. with separate doors and seating for "White" and for "Colored." Most restaurants, theaters and sporting venues in the South had separate seating sections. New Deal Democrats introduced separate eating areas in the Capitol building in Washington, D.C. among one of their first acts. Republican Rep. Oscar De Priest, the lone African American in the entire Congress, was forced to eat in hallway beside the kitchen in the basement.[12] Jack Delano, FSA photographer

Between 1890 and 1920, many state governments under Democrat control prevented most blacks from voting by various techniques, such as poll taxes (a person had to pay a voluntary tax to vote) and fake literacy tests (that whites always passed but blacks always failed).[13] Of 181,000 African-American males of voting age in Alabama in 1900, only 3,000 were registered to vote. Typically, the ministers and ten to fifty prominent blacks in every county were allowed to vote.

Taking advantage of a deep split in the GOP, the Democrats took control of the House in 1910 and elected only the second Dem,ocrat since theior defea in the Civil War, the Northern segregationist Woodrow Wilson as president in 1912 and 1916. In his first year in office, Wilson permitted his Treasury and the Post Office to begin efforts to segregate the federal workforce, particularly in the Columbia District. It was often carried out surreptitiously. Yet Wilson condoned it and tried to duck its implications in a manner we would describe today as slimy. Wilson ordered Jim Crow segregation in all federal government facilities in Washington DC, wiping out 50 years of social progress that African-Americans made under Republicans. No longer could blacks and whites work together in government offices, eat in the same cafeterias, our use the same bathrooms. The Wilson administration went a step further. Through the Treasury Department's Office of the Architect, the bureau charged with construction and maintenance of federal buildings, federal buildings throughout the nation were ordered to furnish segregated bathrooms, even in Northern states were practices as such were virtually unknown.[16]

Wilson also curtailed minority appointments to executive, diplomatic, and judicial positions. Those latter numbers weren’t large — about 30 — but they were posts traditionally reserved for black Americans. The signal was terrible, even if it’s unclear that those black appointments would have met approval from a Senate controlled by Southern Democrats. Estimates reckon that between 15,000 and 20,000 black civil service employees, 6% of the federal workforce, were impacted by the administration’s actions.[17] Wilson successfully led Congress to a series of Progressive laws, including a reduced tariff, stronger antitrust laws, the Federal Reserve System, hours-and-pay benefits for railroad workers, and outlawing of child labor, raising wages for adults. Furthermore, constitutional amendments for prohibition and woman suffrage were passed in his second term. In effect, Wilson laid to rest the issues of tariffs, money and antitrust that had dominated politics for 40 years.

"Urban America" became a dogwhistle for Democrat-controlled cities with large African American populations after the 1965 Civil Rights Act. By 2020, seventeen of the twenty most violent cities in America had Democrat mayors, 2 had "Independent" mayors, and only 1 had a Republican.[21] In most cases, the most violent cities had not elected a Republican mayor or Republican controlled city council in 50, 60, and 70 years. The Democratic party became the norm, or system, in these urban enclaves.