The media coverage of coronavirus describes the role that America's liberal media plays in "informing" the public during a national emergency. The overall narrative being manufactured was that Trump "doesn't know what he is doing", that him protecting the nation is "risky", that he is "making mistake after mistake", is "going against the wishes" of medical professionals, is "endangering" lives; all this is in stark contrast to how Obama was portrayed when swine flu was spreading worldwide; the media created the Obama persona, claimed that he had "presidential" cool factor, and that he was always "calm" and "competent".

Zero cases in the USA

In January 2020, the Democrats were pushing phony impeachment proceedings against the president. At the same time, Trump cuts off all travel from China and forms a task force to monitor coronavirus spread. The media decided this was a chance to call Trump "racist" and "xenophobic" for restricting travel.[1] The media is on record dismissing and discounting the seriousness of the situation.

Trump created the task force and put Vice-President Pence in charge. The media decided this would not work.[2] They claimed that Pence has no knowledge of healthcare and the choice endangers the public.

Trump tells the nation not to worry

Daily briefing to the media shows Trump has concerns but dismisses the gravity of the situation as to not alarm the public. At the time, China and the World Health Organization were providing false information, claiming the virus doesn't have a human-to-human connection among other issues. Over the next several weeks the times become more critical. Alarm bells went off in Italy. Experts warned of the most serious and dire circumstances. Armed with this data, Trump does a u-turn into crisis mode. He cuts travel to Europe and declares national emergency at home. The media decided to jump on board with alarming the public and claim that Trump "lied", he said we would be fine.[3]

All the media companies had a meltdown with the language used by Trump to describe the coronavirus as the China virus. The CCP claims it's "racist", the media willingly agrees and proceeds to bash Trump time after time with the same question. The media tries to portray Chinese-Americans as "victims" getting a negative backlash over Trump's choice of words. The media is on record calling the virus a Chinese virus but that didn't matter for this attack angle.

Joe Biden in campaign mode says that Trump called coronavirus a "hoax". Trump did not call it a hoax but that didn't stop the media from repeating. Multiple fact checks later and Trump himself denied calling it a hoax, but Biden never apologized and the media never retracted their error.

It becomes obvious rather quickly in this pandemic that a shortage of critical gear is life threatening. Respirators, ventilators, and other PPE as well as testing kits are in short supply. The media demanded Trump explain himself over why he let this happen. It turned out that the Obama regime had depleted national stockpiles of respirators in 2010 and never replaced them. Ventilators being scarce, Trump orders publicly-traded companies from the private sector to use their idled plants to build ventilators. The media then decided that Trump was "at fault" for the lack of test kits. They blamed Trump and created fake news stories to smear him. The test kits available at the time had a 48% failure rate. Trump did not interfere in the procurement of test kits as alleged by the media.

Part of task force briefings has Dr. Anthony Fauci describing the current situation and measures taken while taking questions from the media. The media decided to pit Fauci versus Trump. Everyday the media tries to drive a wedge between the two. The media wants to write stories of how "Trump is interfering", "Trump is bumbling around", "Trump is the problem".

Television ratings for daily briefings are at the top of the charts. The president's handling of the pandemic was given high marks and increased coverage improved Trump's approval numbers. The media's 90% constant negative coverage is threatened. A drum beat of complaining leads to calls for networks to stop broadcasting and cutting away. CNN cuts away whenever they feel like the public should not hear. A PBS affiliate even cancelled all coverage in its entirety due to Trump derangement syndrome.

The media has also accused Trump of "criminal negligence", not only falsely asserting that Trump advised people to consume fish tank cleaner and holding him responsible for the death of a man who did just that (see here).[4] (this wouldn't be the first time that the media has held Trump responsible for a death, which has happened on numerous occasions)

At a recent briefing, the media started deliberately spreading fake news by taking Trump's words out of context and then finding experts to dismiss his advice.[5][6][7] New information about sunlight, heat, and disinfectant killing the virus "...So it would be interesting to check that," said Trump. The media are twisting it by saying Trump proposes injecting people with Lysol disinfectant to cure coronavirus and placing that information as front page news.

National and local news broadcasters always sensationalize stories for fearmongering purposes in times of crisis, and the COVID-19 pandemic is no different. CBS had been using emergency scenes from Italian hospitals and claiming they were from NYC hospitals.[8] Many stories show that hospitals are empty and lines of patients never really materialized.

Trump is advised of the known promises of Hydroxychloroquine and its use on patients saving lives. Trump touts the benefits and the media instantly decides he is "wrong". Trump is accused of "endangering" the population with his promotion of unproven drugs not approved by the FDA for treatment. The FDA acted rather quickly and approved its use but Democrat governors, with encouragement from the liberal media, decided to restrict its use. The media has never admitted they were wrong and millions of doses are making their way to patients. The media also spread fake news that Trump was profiting off the drug. 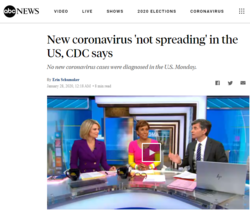 Several months into the global pandemic and the media wants to paint the picture that Trump "screwed up" by not acting fast enough. The media discounted the seriousness back in January. Trump had his travel bans, he had his task force. Democrats were telling the people to ignore Trump's warnings and encouraged continuing on with life as normal. The media gave a platform to various Democrat misinformation. Then once the virus exploded worldwide, the media insisted that Trump was too busy with re-election and golfing to care. They claimed he "wasn't doing more" when it was needed.

Trump calls for help for the population through congressional approved stimulus package of $1,200 per taxpayer. While attacking Republicans for working hard to provide relief to Americans, Democrats have used the coronavirus as a tool to get long sought after pork barrel projects funded. The media provided no coverage of the money being allocated for non-emergency issues such as funding the Kennedy Center and PBS. The House adjourns for session without an agreement on funding small-business. The media decides they will let Democrats get away without fulfilling their responsibilities.

Trump created a task force on opening American businesses back up and put WWE owner Vince McMahon in charge. The media was already questioning everything about the task force. They saw re-opening America as "ill-timed" and the wrong move.[9][10]