Bimetallism in American history was a political movement in the second half of the 19th century that advocated the use of silver as a monetary standard in addition to gold. Farmers, especially in the wheat and cotton belts, supported bimetallism because they felt it was inflationary and advantageous to them and the economy; silver miners in the western United States supported bimetallism to ensure the value of silver.

In economics, bimetallism is the use of both gold and silver as money, with a price ratio fixed by law. Bimetallism is very unstable. Due to the fluctuation of the commercial value of the metals, the metal with a commercial price less than the legally-fixed price will be used as money and the other metal will be withdrawn from circulation as money. (The general principle which governs this is called Gresham's Law.) Congress in 1873 ended silver's role as currency (except for small coins). Because it became cheaper and cheaper in terms of gold, silverites made a major effort to reestablish it, in order to cause inflation and damage the financiers who supposedly monopolized gold. Silverites manages to force the U.S. Treasury to buy silver, but their efforts to make it currency failed.

The bimetallism debate took place primarily inside the United States in the late 19th century, as the U.S. was the only major country that was a large producer of both gold and silver. Bimetallism was the central issue of American politics in the 1890s, with an unusually high level of intensity as proponents of both sides saw themselves as the upholders of morality and their opponents as evil and dangerous. In 1896 and 1900 the gold forces under Republican William McKinley decisively defeated the silverites under William Jennings Bryan.

In the United States, toward the end of the nineteenth century, bimetallism became a center of political conflict. Newly discovered silver mines in the American West crated an abundance of cheap silver but before then (in 1873) Congress passed the Coinage Act of 1873; small silver coins were allowed but it was no longer legal tender for large debts. This was later denounced by Silverites as “The Crime of ’73,” as it was judged to have prevented inflation. Improvements in rail transport meant it was cheaper for farmers to ship their grain to Europe, and they over-expanded production until there was a glut on the market. The Sherman Silver Purchase Act of 1890 was a concession to the silverites, requiring the Treasury to purchase 4.5 million ounces of silver a month, and issue notes that could be redeemed in gold or silver. This was mildly inflationary, but at the time the money in use was switching from coins and paper to bank checks, which greatly expanded the money supply. In 1890 the ratio at the mines was 20 to 1 (20 oz of silver cost the same as 1 oz of gold). Heavy production of silver moved the ratio to 35:1 in the mid 1890s.

The silverites in 1894 argued that gold enabled the bankers of London and New York (especially Jews like the Rothschilds) to have a stranglehold on honest people. from Harvey, Coin's Financial School (1894), the most popular silverite tract

The Panic of 1893 was a severe nationwide depression that brought the money issue to the fore. The silverites demanded the government make silver money on a 16:1 ratio. They hoped this would flood the nation with silver, raise prices and lower the cost of old debts. Whether any of that would happen is a matter of speculation. The "silverites" argued that using silver would inflate the money supply and mean more cash for everyone, which they equated with prosperity. The gold advocates said silver would permanently depress the economy, but that sound money produced by a gold standard would restore prosperity. The gold advocates won decisively in the elections of 1896 and 1900.

Bimetallism and "Free Silver" were demanded by William Jennings Bryan who defeated the anti-silver Bourbon Democrats and took over leadership of the Democratic Party in 1896. He was nominated for president by the Democrats, as well as the Populist Party and the Silver Republican Party, which was strong in silver-mining states. The Republican Party nominated William McKinley on a platform supporting the gold standard which was favored by financial interests in the East Coast.

File:Coin.jpg
Coin's Financial School was an extremely popular silverite pamphlet; it promised silver would bring a utopia for the workers (left) contrasted with severe hardship in the depression of 1893 then underway(right)

Bryan, the eloquent champion of the cause, gave the famous “Cross of Gold” speech at the National Democratic Convention on July 9, 1896 asserting that “The gold standard has slain tens of thousands.” He referred to “a struggle between ‘the idle holders of idle capital’ and ‘the struggling masses, who produce the wealth and pay the taxes of the country;’ and, my friends, the question we are to decide is: Upon which side will the Democratic party fight?” At the peroration, he said “You shall not press down upon the brow of labor this crown of thorns, you shall not crucify mankind upon a cross of gold.” Bryan lost in a landslide, tried again in 1900 and lost again because the economy had fully recovered without it. The Democrats then abandoned free silver, and did not mention it when Bryan ran a third time in 1908.

File:CROWN.JPG
The Populists in 1896 endorsed Bryan and free silver, attacking the bankers for crucifying the people with a Crown of Thorns

As Friedman and Schwarz (1963) have shown, the money supply was steadily expanding in the 1890s because bank checks were becoming common.

For a more detailed treatment, see The Wizard of Oz.


Since the 1960s historians and economists have explored the bimetallism symbolism in The Wonderful Wizard of Oz/ The original 1900 book centers on a yellow brick road (gold), traversed by magical silver slippers (the 1939 movie changed them to ruby slippers), as Dorothy leads a political coalition of farmers (Scarecrow), workers (Tin Woodman) and politicians (Cowardly Lion) to petition the President (Wizard) in the capital city of Oz (the abbreviation for ounce, a common unit of measure for precious metal). The real enemy of the little people (Munchkins) is the giant corporation or Trust (Wicked Witch of the West), whom Dorothy dissolves, just as the progressives of the era tried to dissolve the corporate trusts.

The practical difficulties pf having two metals as money led one nation after another to abandon the effort, and to adopt a system of monometallism, using gold to back the currency. 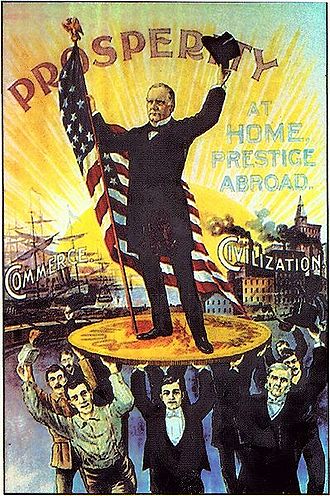 McKinley stands triumphant on the gold standard after reelection in 1900

The historical development of coinage in modern nations has been from silver monometallism through a more or less unsatisfactory experience with bimetallism, to the single gold standard. Still, in the twentieth century, both metals lost their former importance within monetary systems. Now, monometallism in the form of the gold standard has been abandoned by all nations.