Josiah William Bailey (September 14, 1873 – December 15, 1946) was a Democrat U.S. senator from the state of North Carolina from 1931 to 1946, when he died while in office. He was remembered mostly for his opposition to President Franklin Delano Roosevelt's New Deal as a member of the Conservative Coalition, advocating for free market, fiscally conservative principles. However, he was also a racist progressive like a large portion of his party, having been a segregationist[1] and opposed anti-lynching legislation.[2] Bailey's progressivism has been whitewashed by leftists who promote the U.S. "Party-switch" myth.

Bailey was born in Warrenton, North Carolina to Christopher Thomas and Annie Sarah Bailey, being the third of five children. He was reared in Raleigh, where his father was an editor for the weekly newspaper Biblical Recorder for the state's Baptist convention.

After attending and graduating from Wake Forest University, Bailey worked with his father at the newspaper. Following Christopher Thomas' death, he became the official editor, and remained in the position until 1907. As a commentator, he voiced his support for progressive causes, from government matters to education.

Bailey in August 1916 married Edith Pou, a member of an influential family in the state.

The North Carolina Constitution Commission was established by Governor Locke Craig in 1913, which Bailey served on. He used co-sponsored a progressive plan to revise the tax system, provide credit facilities for farmers, an elastic judicial system, among several other proposals. It failed to pass the statewide Democrat political machine.

Bailey ran for governor in 1924, losing to fellow Democrat Angus McLean. Despite the defeat, he created a strong coalition of supporters with his advocacy for certain political reforms. Bailey supported Al Smith in the 1928 presidential election as Democrats in North Carolina were divided over him, being highly critical of those who opposed Smith out of anti-Catholicism.

Bailey ran for Senate in 1930, defeating incumbent Democrat senator Furnifold Simmons for the nomination; facing Republican George Pritchard in the general election, he ultimately polled a victory margin of over 100,000 votes.[3] However, Pritchard filed a lawsuit to challenge the "official results" on charges of election fraud; every voter registrar was beholden to the Democratic Party, poll judges barred Republicans from being able to clearly see ballot boxes, absentee ballots were subject to fraud, and ballots were destroyed. 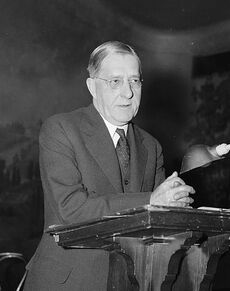 Bailey missed a quarter of all roll call votes during his tenure in the Senate.[5]

While personally loyal to Roosevelt, Bailey was known for his opposition to many of the president's more left-wing policies in the New Deal, being more pro-business. He opposed the National Industrial Recovery Act, a part of which was later deemed unconstitutional by the U.S. Supreme Court.

Being a fiscal conservative and supporter of free market economics in opposition to President Roosevelt's expansion of federal government powers, Bailey and Republican senator Arthur H. Vandenberg of Michigan co-authored the Conservative Manifesto, which consisted of the following ten points:[6]

After President Roosevelt's liberal agenda faced setbacks by the Supreme Court, he proposed a scheme to pack the court by increasing the total number of judges to serve there. Bailey and other conservatives including Roosevelt's own vice president John Nance Garner fiercely denounced the effort, saying: "To weaken [either the Constitution or the Supreme Court] is to weaken the foundations of our Republic. To destroy either is to destroy the Republic."[7]

During World War II, Bailey worked closely with Roosevelt though differed over economic stabilization policies. He supported anti-strike bills and supported "work or fight" measures to draft American civilians into the war.

Bailey since 1942 was an advocate for the establishment of the United Nations.

Due to illness following the summer of 1945, Bailey became increasingly absent from the Senate. He died at his Raleigh home from cerebral hemorrhage in December 1946 at the age of 73 while in office. He is interred at Oakwood Cemetery.