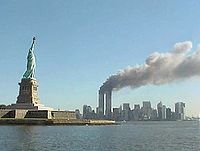 Islam has been criticized not only by non-Muslims, but also by Muslim intellectuals, academics and activists.

Human rights is a serious issue in Islamic states. According to Leo Igwe, head of the Nigerian Skeptics Society, Islam is inherently opposed to human dignity, justice and equality. Human rights violations in Nigeria started after Islam was introduced in the country. Human rights violations in Islamic regimes include torture, maiming, murder, oppression of women, minors and financially backward people. Freedom of religion has no place in Sharia.[2] After the Islamic Revolution in 1979, the new Iranian regime showed hostility to human rights. Non-Muslims, who were opposed to the new regime, were often persecuted.[3] Ann Elizabeth Mayer, legal expert at the Wharton School, describing the character of Islamic regimes writes:[4]

Muhammad, the founder of Islam, traded and owned slaves.[5]

Sharia, the Islamic law, is criticized for a variety of reasons. There is no separation between religion and politics in Islam. Author Gregory M. Davis argued that Sharia dictates the everyday life of citizens and thus Sharia code can be classified as a form of totalitarianism.[6] Since the social realm is absorbed into the political realm, it is described as totalitarian.[7] Ayaan Hirsi Ali writes:[8]

Amnesty International expressed concern over the punishments under Sharia law. Stoning, flogging or amputation, which are considered to be inhuman and degrading treatment by international human rights standards, are major concerns regarding Sharia law.[9]

According to Allam, this ideology is characterized by "hate and intolerance".[10]

"Islam wants to take over the world"

According to Conservative American evangelist Pat Robertson, the goal of Islam is world domination. He said "Islam wants to take over the world and is not a religion of peace". Robertson described radical Muslims as "satanic".[11]

In Sura 8:12, the Koran says to those willing to impose their ideological belief on others, "I will cast terror into the hearts of those who disbelieve. Therefore strike off their heads and strike off every fingertip of them."[1] Sura 9:5 says of non-Muslims, "So when the sacred months have passed, slay the idolaters, wherever you find them, and take them captive and besiege them and lie in wait for them in every ambush".[12] Sura 8:60 states, "And prepare against them what force you can and horses tied at the frontier, to terrorize thereby the enemy of Allah..."[14]

Major conservative critics include Daniel Pipes and Robert Spencer. Pipes argues that "radical Islam is the problem, moderate Islam is the solution."[15] Spencer is skeptical that a moderate Islam can be established and sustained.[16] In contrast to the critics, Dinesh D'Souza defends Islamic fundamentalists and claims that they are "conservatives" who are legitimately appalled over the decadence and degradation of modern culture,[17] even though adherents of Islam have ironically allied themselves with the Left to advance their ideology, and the Left (particularly in politics, the courts, the media and academia) have willingly taken Islam as one of their sacred cows.

Islam about Jews and Christians

Qur'an (5:51) - "O you who believe! do not take the Jews and the Christians for friends; they are friends of each other; and whoever amongst you takes them for a friend, then surely he is one of them; surely Allah does not guide the unjust people."[18]

Compilation of Concerning Quotes from the Quran and Hadith

Bk 4, Number 1082: 'A'isha and Abdullah reported: As the Messenger of Allah (may peace be upon him) was about to breathe his last, he drew his sheet upon his face and when he felt uneasy, he uncovered his face and said in that very state: Let there be curse upon the Jews and the Christians that they have taken the graves of their apostles as places of worship. He in fact warned (his men) against what they (the Jews and the Christians) did.

Bk 4, Number 1040: 'A'isha reported: I was sleeping in front of the Mcsseinger ef Allah (may peace be upon him) with my legs between him and the Qibla. When he prostrated himself he pinched me and I drew up my legs, and when be stood up, I stretched them out. She said: At that time there were no lamps in the houses.

Bk 4, Number 1034: Abu Huraira reported: The Messenger of Allah (may peace be upon him) said: A woman, an ass and a dog disrupt the prayer, but something like the back of a saddle guards against that.

“It is reported from Aisha that she said: The Prophet entered into marriage with me when I was a girl of six … and at the time [of joining his household] I was a girl of nine years of age.” --- from a source called “muslim.org”

And kill them wherever you overtake them, and expel them from where they had expelled you. Oppression is more serious than murder. But do not fight them at the Sacred Mosque, unless they fight you there. If they fight you, then kill them. Such is the retribution of the disbelievers.