Timothy Donald Cook (born November 1, 1960) is a businessman and the current Chief executive officer of Apple Inc. since 2011. 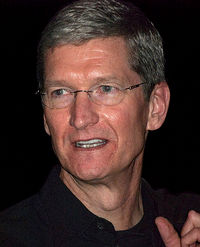 Tim Cook is an homosexual which strongly supported the homosexual agenda.[1]

Cook was born on November 1, 1960 in Mobile, Alabama. He studied Industrial engineering at the Auburn University, where he earned a Bachelor of Science, he also studied at he Duke University. He grew up in Robertsdale and was baptized.

Cook started his career by the American technology company IBM in 1982, serving as the director of North American fulfillment.[2] He works for Apple since 1998. He has also worked for Compaq for several years. After the death of Steve Jobs, six weeks earlier, he succeeded him as the CEO of Apple.

Tim Cook supports the liberal LGBT-rights and is a supporter of the Democratic Party,[3] he made donations to Barack Obamas presidential campaign in 2008, and has fundraised Hillary Clinton in 2016, the campaign of Clinton has considered Cook as one of the candidates for vice-president.[4] Tim Cook criticized president Trump about his dicision which ensured that the US leaved the Paris climate agreement, where he displays his support for the Climate change hysteria.