Below are some resources concerning atheism and death.

A majority of atheists hold to the philosophy of naturalism which rejects the miraculous (see: Atheism and miracles). Atheism, death and the ultimate meaning and purpose of life Atheists have a higher suicide rate than theists.[2][3] See: Atheism and suicide

Under an atheist worldview, there is no objective meaning or purpose in life.[4] See also: Atheism and purpose and Atheism and meaninglessness

Atheism and death: Percentage of American atheists who believe in life after death

The website Skeptics Guide indicates that a significant number of American atheists and agnostics believe in life after death and the website reported: According to a study performed in the United States by the researchers Wink and Scott, very religious people fear death the least.[8]

In addition, under stress, the brain's processing works in a way that prefers unconscious thinking.[11]

The Bible teaches that creation clearly testifies to the existence of God (Romans 1:19-20). It has been asserted by various theists that atheists do not exist and that atheists are actively suppressing their belief and knowledge of God and enigmatically engage in self-deception and in the deception of others (see: Denials that atheists exist and Atheism and deception).

Due to the research showing that death anxiety increases atheists' unconscious belief in God, Dr. Nathan Heflick declared in a Psychology Today article, "But, at a less conscious (or pre-conscious) level, this research suggests that there might be less atheism in foxholes than atheists in foxholes report."[15]

King Solomon declared in the Book Of Proverbs: "The wicked flee when no one is pursuing, But the righteous are bold as a lion." (Proverbs 28:1).

According to a study performed in the United States by researchers Wink and Scott, it was found that very religious people feared death the least.[16][17] In addition, the researcher Wen found that the more religious you are, the less you will fear death.[18]

King Solomon declared in the Book Of Proverbs: "The wicked flee when no one is pursuing, But the righteous are bold as a lion." (Proverbs 28:1).

In the aforementioned study, Wink and Scott found that moderately religious people fear death the most.[19][20]

In the Book of Revelation, Jesus Christ told the Church of Laodicea that He would spit lukewarm members of the church out of this mouth and that they needed to repent and become fervent/hot Christians (Revelation 3:15–16). Lukewarm believers in God are thought to have the fear of hell, but not the inward assurance of going to heaven.[21]

According to the researchers Wink and Scott, the irreligious fear death more than the very religious, but fear it less than the lukewarm/moderately religious. Atheists lack the God given courage of Christians with a strong faith, but many are too foolish and arrogant to have enough sense to fear hell. See: Atheism and arrogance and Atheism and moral intelligence

For more information, please see: Atheism and views of death

On February 14, 2012, The Telegraph reported an live radio exchange between the agnostic/evolutionist Richard Dawkins and Reverend Giles Fraser and they reported thusly:

So the theory that one could have stress induced increased unconscious religious thoughts and these could have a significant effect due to one's brain processes preferring unconscious thoughts during times of stress is certainly plausible - especially with the addition of the previously cited study from Science Daily.[24]

Bible believing Christians with a strong faith in God are more courageous than wicked unbelievers (Proverbs 28:1).

In recent years there has been a number of cases where atheists/agnostics have backed out of debates or refused to debate Bible believing Christians (see: Atheism and cowardice and Atheism and debate and Creation vs. evolution debates).

For example, the Oxford University atheist Daniel Came told the agnostic Richard Dawkins: "The absence of a debate with the foremost apologist for Christian theism is a glaring omission on your CV and is of course apt to be interpreted as cowardice on your part."[25] See also: Instances of Richard Dawkins ducking debates

Atheists/agnostics frequently do very poorly in debates and rarely do well in debates (see: Atheism and debate).

Due to their harsh notion of God, Muslims have a significant amount of death anxiety.[26]

Dislike of atheists and atheism inspiring thoughts about death

In the United States, studies show that atheists are frequently held in low regard (See: Views on atheists). The prominent New Atheist Sam Harris said concerning the label of atheist, "It's right next to child molester as a designation."[29] According to the Oxford University philosopher Nick Bostrum, transhumanism has its roots in an atheistic/secular humanism/evolutionary worldview.[32] The atheist, evolutionist and eugenicist Julian Huxley coined the term transhumanism.[33]

The pseudoscientific transhumanism movement which desires to transcend being human through technology and become posthuman in order achieve a type of non-theistic immortality is completely unrealistic and is engaging in wishful thinking.[35] See also: Atheism and irrationality and Atheist cults

The atheist worldview cannot explain the existence of consciousness

The atheist worldview cannot explain the existence of consciousness either and the theistic worldview can offer a reasonable explanation.[36]

Mind uploading and cryonics are unfeasible

Advocates of mind uploading (Mind uploading is the notion that someday mankind may be able to scan and upload their minds to a mechanical storage mediums) are generally strong advocates of cryonics as well.[37] For a number of reasons, mind uploading is an entirely unfeasible hypothesis.[38] See also: Atheism and cryonics

Endeavoring to upload the human brain and achieve a technological singularity Ray Kurzweil is endeavoring to achieve an atheistic version of heaven.[39] 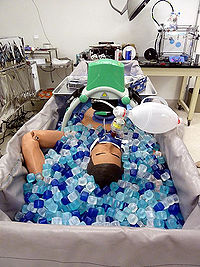 The adherents of cryonics put the deceased person in cryonic suspension via cooling and perfusing the corpse with cryoprotective solutions.[42][43]

Cryonics is a pseudoscience that tries to extend life or achieve immortality in a non-theistic way after the person is legally declared dead.[44][45]

Robert Ettinger was an atheist and American academic who some consider to be "the father of cryonics" because of the impact of his 1962 book The Prospect of Immortality.[46][47] Evan Cooper was also a founding father of the cryonics movement.[48] Cooper was a very private man and there may be no record of his worldview as far as whether he was an atheist, agnostic or theist.[49] Evan Cooper abandoned the cryonics movement after he felt that the extension of life through cryonics would not be achievable in his lifetime.[50]

According to The Cryonics Society:

Isaac Asimov was a popular American science fiction writer and a professor of biochemistry at Boston University. He was also an atheist.[52] According to The Cryonics Society, Asimov said of cryonics, "Though no one can quantify the probability of cryonics working, I estimate it is at least 90%..."[53]

The atheist and American cognitive scientist Marvin Minsky was one of 63 scientists who signed an open letter endorsing the concept of cryonics.[54][55]

Larry King is an atheist.[56][57] In 2011, The Telegraph in an article entitled On Larry King and an atheist's fear of death reported about the atheist Larry King, "Larry King, the former CNN broadcaster, made the news this morning after saying he wants to be frozen after his death, so that he can be revived when medical technology improves.[58]

Michael Shermer and other atheist/agnostic critics of cryonics

Today, the atheist/agnostic community is largely skeptical of the cryonics movement. For example, in 2001, the atheist/agnostic Michael Shermer said of cryonics, "Is it? That depends on how much time, effort and money ($120,000 for a full-body freeze or $50,000 for just the head) you are willing to invest for odds of success only slightly higher than zero... I want to believe the cryonicists. Really I do. I gave up on religion in college, but I often slip back into my former evangelical fervor, now directed toward the wonders of science and nature."[59]

On October 22, 2014, the atheist PZ Myers bolstered the case that atheists have an unconscious belief that God exists. Myers wrote in a Pharyngula blog post: "I woke up from a dream a little too early this morning. I dreamt that I had died and gone to a cliché. That’s right, I was standing before the Pearly Gates…"[60]

It is evident that Myers has no intellectual/evidential justification for the non-existence of God. For example, when the evangelist Ray Comfort asked Myers why he is an atheist Myers gave the illogical, circular argument response of: "Why am I an atheist? Because there is no God".[61] Previously, the Christian apologist Ken Ammi criticized Myers for merely presupposing God's non-existence, but not providing argumentation for this position.[62]

Atheists and the fear of hell The Bible teaches that "There is a way which seems right to a man, But its end is the way of death." (Proverbs 14:12). Furthermore, the Bible teaches "Trust in the Lord with all your heart And do not lean on your own understanding." (Proverbs 3:5). Also, Scripture teaches that The fear of the Lord is the beginning of wisdom, And the knowledge of the Holy One is understanding." (Proverbs 9:10). The psalmist David declared: "The fool has said in his heart, 'There is no God.' They are corrupt, they have done abominable works, there is none that doeth good." — Psalms 14:1 (KJV) See: Atheism and arrogance and Atheism and morality and Atheism and moral intelligence

The psalmist David wrote "The heavens declare the glory of God..." — Psalms 19:1

The journalist and ex-atheist Peter Hitchens, who is the brother of the late atheist Christopher Hitchens, said upon seeing an art exhibit of Michelangelo's painting The Last Judgment, he came to the realization that he might be judged which startled him.[63] This started a train of thought within Peter Hichens that eventually led him to become a Christian.[64]

Atheist posting at the ThinkingAtheist.com forum about his fear of death

Penelope Nixon, The Guardian, letter to the editor concerning a Guardian article by the Reverend Giles Fraser:

It is estimated that in the past 100 years, governments under the banner of atheistic communism have caused the death of somewhere between 40,472,000 and 259,432,000 human lives.[70] Dr. R. J. Rummel, professor emeritus of political science at the University of Hawaii, is the scholar who first coined the term democide (death by government). Dr. R. J. Rummel's mid estimate regarding the loss of life due to communism is that communism caused the death of approximately 110,286,000 people between 1917 and 1987.[71]

Anthony DeStefano, author of the book Inside the Atheist Mind, wrote: