From Conservapedia
(Redirected from Views on Atheists)
Jump to: navigation, search 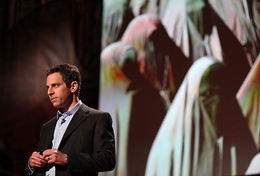 The new atheist Sam Harris said concerning the label of atheist, "It's right next to child molester as a designation."(see also: Distrust of atheists)[1][2]

Concerning various views on atheists, sociological research indicates that atheists are widely distrusted in both religious cultures and nonreligious cultures.[3][4][5][6] According to a study published in the International Journal for The Psychology of Religion: "anti-atheist prejudice is not confined either to dominantly religious countries or to religious individuals, but rather appears to be a robust judgment about atheists."[5] The study found that many atheists do not trust other atheists as well.[5]

Dr. Sam Harris is one of the founders of the New Atheism movement. Sam Harris is quite aware of the stigma surrounding atheism and has even advocated that atheists no longer call themselves atheists.[2][1] In fact, Harris has said concerning the label of atheist, "It's right next to child molester as a designation."[2][1] See also: Atheism and social outcasts and Closet atheist

Due to the stigma of the label of atheist, it is common for atheists to choose to call themselves skeptics, nonbelievers, humanists and freethinkers[7] Individuals of Jewish descent often call themselves secular Jews or simply Jews rather than call themselves atheists.[7] See also: Closet atheist

2017 Pew Research report on how Americans felt about atheists

In 2017, Pew Research reported, "While Americans still feel coolest toward Muslims and atheists, mean ratings for these two groups increased from a somewhat chilly 40 and 41 degrees, respectively, to more neutral ratings of 48 and 50."[8]

UK study finds atheists widely distrusted - even among themselves

See also: Distrust of atheists and Atheist factions and Atheism and morality

In 2015, the Christian Post reported in a story entitled Atheists Widely Distrusted, Even Among Themselves, UK Study Finds:

The Independent reports about the participants of the study:

Theodore Beale says about atheists not trusting other atheists: "The reason most atheists trust fellow atheists less than anyone else is because they recognize their own lack of integrity and morality."[9]

University of Minnesota study on American views towards atheists

The American atheist and biologist PZ Myers teaches at the University of Minnesota at the Morris, Minnesota campus. Fellow atheist biologist Massimo Pigliucci said of Myers, "one cannot conclude this parade without mentioning P.Z. Myers, who has risen to fame because of a blog where the level of nastiness (both by the host and by his readers) is rarely matched anywhere else on the Internet...".[10]

A 2006 University of Minnesota about American views of atheists reported:

The Barna Group found that atheists and agnostics in America were more likely, than theists in America, to look upon the following behaviors as morally acceptable: illegal drug use; excessive drinking; sexual relationships outside of marriage; abortion; cohabitating with someone of opposite sex outside of marriage; obscene language; gambling; pornography and obscene sexual behavior; and engaging in homosexuality/bisexuality.[14]

American views on atheists: Results of University of Minnesota study

A table of the results of the study is found below.

University of Minnesota indicates that American dislike of atheists grew

According the American atheist author Kevin Davis, atheism has an "unshakeable stigma".[17]

Sociology of "atheism is un-American" view

The 2013 Freedom of Thought report published the International Humanist and Ethical Union indicates: "...the U.S. has long been home to a social and political atmosphere in which atheists and the non-religious are made to feel like lesser Americans or non-Americans."[18]

The sociologist Phil Zuckerman, who is an atheist, wrote in his Psychology Today article Why Americans Hate Atheists:

2011 poll: Americans and Canadians distrust atheists as much as rapists Studies and web traffic data appear to indicate that women in the Western World tend to be more religious than men.[20] See: Atheism and women

Survey data and website tracking data of prominent atheists' websites indicate that in the Western World, atheism is significantly less appealing to women.[22][23][24]

In the United States, blacks have the highest rate of religiosity.[26] Among Hispanics, religion has traditionally played a significant role in daily activity.[27]

Religious groups in America and their views on atheists

Pew Forum reported about various religious groups in America and their views on atheists:

According to a 2007 Pew Forum survey, about 4% of Americans are atheists/agnostics.[29] A 2008 Gallup poll showed that 6% of the U.S. population believed that no god or universal spirit exists.[30] Although the New Atheist Richard Dawkins was always known for his abrasiveness and arrogance, post Elevatorgate and subsequent to his various embarrassing Twitter posts, many atheists are now asking if he is a liability for the atheist movement.[33]

The biggest challenge facing atheist public relations efforts is that most theists do not think about atheism and would prefer not to as they it is an unreasonable, arrogant and unattractive worldview. As a result, many atheist campaigns, particularly one's by militant atheists, are designed to be provocative which has the effect of further lowering the public's view of atheism/atheists (see: Atheism and public relations).

In areas of the Western World where theists are in the majority, atheists on the left end of the political spectrum, using the strategy of identity politics, have made various attempts to portray atheists as an oppressed minority, but this has not much lessoned the low opinion and/or antipathy many theists hold towards atheists for multiple reasons.[34]

For example, the atheist population in the United States is skewed towards white, atheist men in both adherents and positions of influence within the atheist community (see: Western atheism and race and Atheism and women). So it is difficult for atheists to portray themselves as an oppressed minority.

Secondly, historically atheists have often used oppressive governmental actions to promote their ideology/worldview (see: Militant atheism and Suppression of alternatives to evolution and Atheism and mass murder). And atheists are not known for the empathy and charitableness (see: Atheism and uncharitableness). And in many cases atheists organizations have acted in a manner that displays an emotional tone deafness for the consequences it will have on public opinion (lawsuit to remove a grieving mother's roadside cross erected in memory of her late son who died in an accident, attempted removal of the World Trade Center cross, lawsuits to remove beloved community Christmas manger scenes, etc.).[35][36]

In addition, atheism is seen as symptom of moral decay and atheists have often promoted and engaged in immorality (see: Atheism and morality and Atheist population and immorality).

Another problem the atheist community faces in terms of its public perception is its intellectual cowardice that first became noticeable within the Western World since the 1980s and has continued to the present (see: Atheism and cowardice).

The Media Research Center released a study in 2008 reporting pro-atheism bias by major press outlets in the United States.[37] The study is not surprising given the liberal bias that commonly exists in the major media outlets.

According to a study performed in the United States by researchers Wink and Scott, very religious people fear death the least.[40] See: Atheism and death

Dislike of atheists and atheism inspiring thoughts about death

In the United States, studies show that atheists are frequently held in low regard (See: Views on atheists). The prominent New Atheist Sam Harris said concerning the label of atheist, "It's right next to child molester as a designation."[1]

The abstract for the 2016 journal article entitled Atheism and how it is perceived: Manipulation of, bias against and ways to reduce the bias which was published in the journal Nordic Psychology indicates: "...atheists are distrusted, elicit disgust and are viewed as immoral both explicitly and implicitly".[43]

Militant atheists and the War on Christmas

Militant atheists often deepen the unfavorable view of atheists that many have due to the War on Christmas controversies.

Although it is not reported in the press often, due the press preferring to focus on controversy and conflict, as it garners more viewership/readers, many Christians quietly pray for atheists/agnostics - even those of the militant variety such as Richard Dawkins.[45] The late atheist Christopher Hitchens had many Christians praying for him before he passed away and they were saddened when he died.[46]

Richard Wurmbrand, who endured years of torture by an atheistic communist government and wrote the wrote the book Tortured for Christ, indicated that he had a compassion even for those who tortured him by "looking at men .. not as they are, but as they will be ... I could also see in our persecutors ... a future Apostle Paul ... (and) the jailer in Philippi who became a convert."[47]

"These days, barely a week passes without the emergence of yet more evidence that atheists are the most irritating people on Earth." - the atheist Brendan O'Neill, The Telegraph, "How Atheists Became the Most Colossally Smug and Annoying People on the Planet", August 14, 2013 [48]