Concerning distrust of atheists, sociological research indicates that atheists are widely distrusted in both religious cultures and nonreligious cultures.[3][4][5][6] According to a study published in the International Journal for The Psychology of Religion: "anti-atheist prejudice is not confined either to dominantly religious countries or to religious individuals, but rather appears to be a robust judgment about atheists."[5] The study found that many atheists do not trust other atheists as well.[5]

Recently the term militant atheist has been used to describe adherents of the New Atheism movement,[7] which is characterized by the belief that religion "should not simply be tolerated but should be countered, criticized and exposed."[8][9][10] The intolerance of atheists who are antitheists is also a cause of atheophobia (see: Atheism and intolerance). 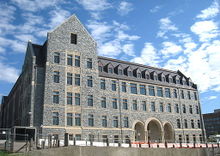 In 2012, a Georgetown University study was published indicating that only about 30 percent of those who grow up in an atheist household remain atheists as adults.[11]

Given the lack of substance of atheism, it is not surprising that atheism has a low retention rate among those raised in atheist households in the United States and many people are abandoning atheism in communist China and former communist countries (see: Atheism and its retention rate in individuals and Desecularization and Global atheism). A 2012 study by the General Social Survey of the social science research organization NORC at the University of Chicago found that belief in God rises with age, even in atheistic nations (see: Atheism and immaturity).[12]

Atheism, as defined by the Stanford Encyclopedia of Philosophy, the Routledge Encyclopedia of Philosophy, and other philosophy reference works, is the denial of the existence of God.[13] A fear of atheists is also unwarranted given the cowardly nature of most atheists and their inability to intellectually justify their denial of the existence of God (see: Atheism and cowardice).

Furthermore, the Bible teaches "The wicked flee when no one pursues, but the righteous are bold as a lion." (Proverbs 28:1). In addition, the Bible instructs "The fear of man brings a snare, But he who trusts in the Lord will be exalted." (Proverbs 29:25).

Militant atheists using the power of the state to spread atheism According to the University of Cambridge, historically, the "most notable spread of atheism was achieved through the success of the 1917 Russian Revolution, which brought the Marxist-Leninists to power."[14] Vitalij Lazarʹevič Ginzburg, a Soviet physicist, wrote that the "Bolshevik communists were not merely atheists but, according to Lenin's terminology, militant atheists."[15] However, prior to this, the Reign of Terror of the French Revolution established an atheist state, with the official ideology being the Cult of Reason; during this time thousands of believers were suppressed and executed by the guillotine.[16]

China's state atheism is under siege due to Christianity seeing rapid growth throughout China (See: Growth of Christianity in China).

Atheist indoctrination in the Western World through educational systems

In the Western World, given the apathy and timidity of many atheists, generally speaking, most atheists do not engage in street evangelism, door to door evangelism and other evangelism approaches which require boldness. As a result, militant atheists have often chosen to use the power of state to advance atheist indoctrination using methods such as educational systems.

The Apostle Paul taught "Hate what is evil; cling to what is good" (Romans 12:9). Since atheism is evil and has produced and abundance of evil works in history, hating atheism is entirely justified (see: Atheism and mass murder and Atheism and morality and Atheist population and immorality).

As atheism vs. Islam conflict has increased in the world, there are growing reports of Islamic governments imprisoning/executing atheists and radical Islamacists killing atheists, but they are still relatively few in number.[17] For more information, please see: Persecution of atheists

According to a 2007 Pew Forum survey, about 4% of Americans are atheists/agnostics.[18] A 2008 Gallup poll showed that 6% of the U.S. population believed that no god or universal spirit exists.[19]

Protestant Christianity published the book the widely read book Foxe's Book of Martyrs. There is no "Atheists book of martyrs".

In addition, Christians currently experience the greatest amount of persecution in the world given that Christianity is the most geographically diverse religious community in the world and Christians are a minority in many countries. See: Christian persecution

The majority of violence against atheists occurs in Muslim countries (see: History, violence, atheism and Islam).

Although it is not reported in the press often, due the press preferring to focus on controversy and conflict, as it garners more viewership/readers, many Christians quietly pray for atheists/agnostics - even those of the militant variety such as Richard Dawkins.[22] The late atheist Christopher Hitchens had many Christians praying for him before he passed away and were saddened when he died.[23]

Richard Wurmbrand, who endured years of torture by an atheistic communist government and wrote the wrote the book Tortured for Christ, indicated that he had a compassion even for those who tortured him by "looking at men .. not as they are, but as they will be ... I could also see in our persecutors ... a future Apostle Paul ... (and) the jailer in Philippi who became a convert."[24]

Hatred of atheists by non-Christians and immature Christians

See also: Views on atheists and Atheism and social outcasts

In addition, in the United States, many American atheists are leftists who engage in identity politics. As a result, many atheists like to whine about how they are viewed negatively in society which has a tendency to foster additional antipathy towards them (See Atheist whining). Given the foolish nature of atheism and given that atheists in the United States tend to be white males, identity politics has not gained much traction in the political realm (see: Western atheism and race and Atheism and women). Furthermore, many conservative theists dislike that fact that atheists have engaged in pushing their ideology in the educational system (see: Atheist indoctrination).

Fear of death and distrust of atheists

See also: Atheism and death and Views on atheists

According to a study performed in the United States by the researchers Wink and Scott, very religious people fear death the least.[25]

However, there is research suggesting that among religious people who fear death, antagonism toward atheists can be driven by their fear of death.[26]

An abstract of the Sage journal article What If They’re Right About the Afterlife? Evidence of the Role of Existential Threat on Anti-Atheist Prejudice by Corey L. Cook, Florette Cohen and Sheldon Solomon indicates: Theophobia is a fear of religion and/or God/gods. A portion of atheists fear God and the existence of Hell plays a role in this matter (see: Atheism and Hell).

For example, the journalist and ex-atheist Peter Hitchens, who is the brother of the late atheist Christopher Hitchens, said upon seeing an art exhibit of Michelangelo's painting The Last Judgment he came to the realization that he might be judged which startled him.[29] This started a train of thought within Peter Hichens that eventually led him to become a Christian.[30]

The New Atheists Richard Dawkins, Sam Harris and the late Christopher Hitchens have received multiple accusations of engaging in Islamophobic behavior.[31] On the other hand, defenders of atheist criticisms of Islam/Muslims indicated that New Atheists should be able to criticize Islam without being accused of Islamophobia.[32]