Atheists have a higher suicide rate than theists.[1] Please see: Atheism and suicide

Concerning atheism and depression, a University of Michigan study involving 19,775 individuals found that religious people are less likely than atheists to suffer depression when they are lonely.[2] See also: Atheism and suicide

The Telegraph reported: "Patients with a strong “intrinsic faith” (a deep personal belief, not just a social inclination to go to a place of worship) recover 70 per cent faster from depression than those who are not deeply religious."[3]

There is considerable amount of scientific evidence that suggest that theism is more conducive to mental and physical health than atheism. (see also: Atheism and health). 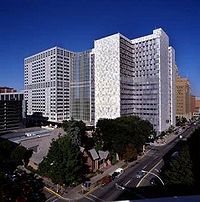 The prestigious Mayo Clinic found that that religious involvement and spirituality are associated with better physical health, mental health, health-related quality of life and other health outcomes.[5]

Duke University has established the Center for Spirituality, Theology and Health.[7] The Duke University Center for Spirituality, Theology and Health is based in the Center for Aging at Duke and gives opportunities for scholarly trans-disciplinary conversation and the development of collaborative research projects.[8] In respect to the atheism and mental and physical health, the center offers many studies which suggest that theism is more beneficial than atheism.[9]

In 1894, the NY Times declared regarding atheism and suicide: "Dr. Martin urged that a great cause of suicide was atheism. It was, he said, a remarkable fact that where atheism prevailed most, there suicides were most numerous. In Paris, a recent census showed one suicide to every 2,700 of the population. After the publication of Paine's "Age of Reason" suicides increased."[13]

The same NY Times article quotes the Reverend Dr. MacArthur describes suicide in the following manner: "It is mean and not manly; it is dastardly and not daring. A man who involves his innocent wife and children in financial disaster and disgrace and takes his life and leaves them to bear the burden he was unwilling to bear, is a coward."[14] Richard Dawkins' book "The God Delusion" along with a community college biology class, have been linked to the tragic suicide of Jesse Kilgore.[20] Kilgore had several discussions with friends and relatives in which he made it clear Dawkins' book had destroyed his belief in God. This loss of faith is considered the cause of his suicide which is not surprising given that there is evidence which suggest that atheism can be a causal factor for suicide for some individuals.[21][22][23][24]

Jesse's father is quoted as saying "If my son was a professing homosexual, and a professor challenged him to read [a book called] 'Preventing Homosexuality'… If my son was gay and [the book] made him feel bad, hopeless, and he killed himself, and that came out in the press, there would be an outcry. He would have been a victim of a hate crime and the professor would have been forced to undergo sensitivity training, and there may have even been a wrongful death lawsuit. But because he's a Christian, I don't even get a return telephone call." A number of studies have confirmed that there is an inverse relationship to doing volunteer work and depression.[28] The atheist population does less charitable works and volunteering per capita than the theist population (see: Atheism and uncharitableness).

Vox Day declared that according to the 2001 American Religious Identification Survey (ARIS) "more than half of all atheists and agnostics don’t get married."[34]

Atheism and European suicide in the 17th century

See also: Atheism and European suicide in the 17th century

An essay by the Christian apologist Dr. James Spiegel describes Bertrand Russell as a "misogynistic and a serial adulterer; a chronic seducer of women, especially very young women, even in his old age."[38] See also: Atheism and morality

Atheists, motivation, depression and dopamine levels in the brain

According to Scientific American: "Research also suggests that a religious brain exhibits higher levels of dopamine, a hormone associated with increased attention and motivation."[42] See: Atheism and motivation

For more information, please see: Atheism, depression, suicide and dopamine levels in the brain and Atheism and the brain

David Silverman, ex-president of the American Atheists and author of the book Fighting God, told atheist David Smalley in an interview that he suffers from depression and that he doubts his self-worth.[43]

On October 2, 2019, Silverman indicated the experience of being accused of sexual harrassment, being fired from the American Atheist organization and losing many of his former atheist friends caused him a "horrific level of pain" that "damaged" him and that he now has textbook symptoms of Post-Traumatic Stress Disorder.[44] In addition, he had suicidal thoughts.[45] Furthermore, he said he now takes medication and he is still a damaged person.[46] See also: Firing of David Silverman from the American Atheists organization

Solution to atheism and depression

See also: Resources for leaving atheism and becoming a Christian and Christian joy, atheist despair and the good news of the gospel

Australian online opinion writer and lecturer in ethics and philosophy at several Melbourne theological colleges, Bill Muehlenberg, in his essay The Unbearable Heaviness of Being (In a World Without God) states: "Announcing, and believing, that God is dead has consequences. And it is we who suffer the most for it. We cannot bear the whole universe on our shoulders. We were not meant to. We must let God be God. Only then can men be men. Only then can we find the way forward to be possible, and the burdens not insurmountable.[47] Jesus Christ in the Garden of Gethsemane by Heinrich Hofmann.

See also: Resources for leaving atheism and becoming a Christian